Walker, Clarke and Evans most outstanding athletes of the year 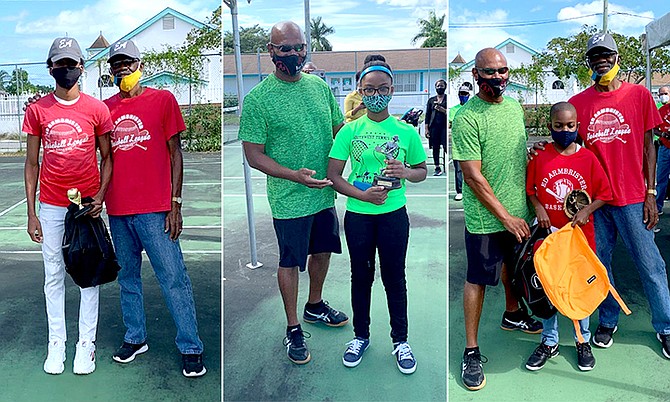 CADIN Walker, Serai Clarke and Khadin Evans shared the spotlight as the recipients of the most outstanding baseball and tennis Athletes of the Year at the Ed Armbrister Baseball and Southwest Tennis Clubs awards ceremony.

The annual awards presentation took place on Saturday at the Fla-mingo Gardens Park to highlight the joint venture between Major Leaguer Ed Armbrister and ver-satile Mike Butler, who have been working hand-in-hand in shar-ing their expertise with aspiring young baseball and tennis players in the Carmichael Road area.

The joint sporting bodies were limited in the sessions they were able to conduct this year, due to the restrictions imposed by the Competent Authority as a result of the coronavirus pandemic.

But Butler said despite the shutdown orders of all parks, he and his assistant Henry Manson, along with other team members, were able to organise some virtual training sessions to engage their participants.

Saturday, however, they were able to stage the awards presen-tation with social distance with about 14 of their participants present.

Ministry of Sports’ Athlete of the Year Sydney Clarke, a former member of the club now attending the University of Alabama at Bir-mingham, served as the Mistress of Ceremony for the affair. Also in attendance was former national squash champion Lester Cox, now a popular radio talk show host.

According to Butler, the athletes were selected for the honours based on their deport-ment, academic performance and tournament results.

“We evaluated those three cat-egories,” he said. “Those were our requirements in making our selection.”

Walker, the top baseball prospect in the programme, was named the Ed Armbrister Baseball Player of the Year. He performed exceptionally at the Baseball Association’s National Championships in Grand Bahama last year and during the training camp over the first three months this year because COVID-19 halted sports.

Academically, Butler said Walker improved tremendously and is an honour roll student at Anatol Rodgers where he is cur-rently in grade eight.

Serai Clarke, the younger sister of Sydney, was awarded the Southwest Tennis Clubs Female Player of the Year, having won the doubles title in February in Grand Bahama.

The 11-year-old was one of the runners-up as the Primary School Student of the Year year. Having graduated from TG Glover Primary School, she is now at Aquinas College where she has a 3.4 grade point average.

Evans, 11, was named the Club’s Male Player of the year.

He shines as a two-sport ath-lete, having started playing tennis, but just recently started playing baseball. He is an honour roll student at Gerald Cash Primary School.

“He attends all of the sessions and participates in all of our tour-naments,” Butler said.

“He won a title in the 12-and-under tennis tournament held earlier this year.”

What is significant about all of the athletes is their ability to improve both athletically and academically.

“Most of these kids come into our programme where they are below average or average,” Butler said. “All of them have blossomed into borderline or some of them have become perennial honour roll students.

“So we know the programme is working because we see the results. All of these students are excelling, so that is our greatest accomplishment.”

From the athletic standpoint, Butler said all of the participants started in their general tennis pro-gramme and they have expended their skills, so they move them into the national development programme.

Butler noted that they have already commenced registra-tion for the 2021 calendar year for both baseball and tennis and he’s encouraging persons to call 544-8576 or 426-9966 for more information.