No Junkanoo - But Groups Want Spirit To Shine On 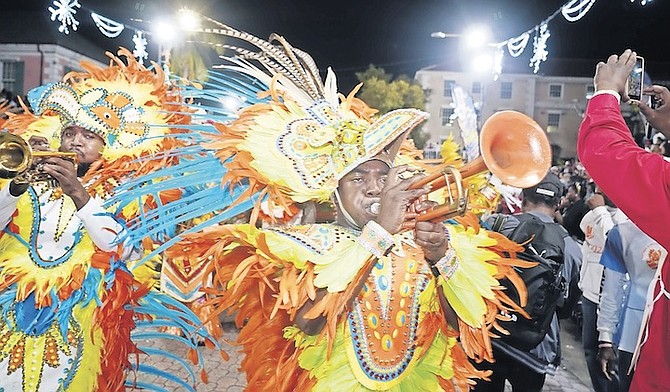 THE SAXONS in action on New Year’s Day at the start of this year.

DESPITE the 2020 Junkanoo parades being cancelled due to the COVID-19 pandemic, some groups say they still plan to keep the Junkanoo spirit alive and celebrate through virtual events.

“What we’re doing is a virtual collage where we send photos of our past costumes throughout the year and we’re going to look at those and virtually have conversations like ‘hey, this was one of our best music mornings,’ we’re going to do stuff in that nature,” she said.

“So, it’s going to be a combination of photos and then we’re going to do the virtual conversation and looking at past parades we have done and looking at the fact that we won two straight in the best music and relive that through commentary.”

The group was named the official winner of the 2019 Boxing Day parade after a penalty reversal, and also went on to claim victory of the 2020 New Year’s Day parade.

Mrs Campbell-Moss said while the Saxons will not get a chance “ to revel” in their double victory on Bay Street this time around, group officials feel hopeful that they will be able to do so next year.

She told this newspaper: “The entire group and our fans as well as our sponsors are saddened by the series of events that COVID has brought on and I think even more so, because you’re a double champion and we did not have a chance to revel in that and a chance to outwardly be celebratory in that regard and I think that has put a damper on our spirits.

“But we do feel within our group and within ourselves, the interior remains the same and we would’ve accomplished victory and when Junkanoo is able to return to the boulevard, us and our ancestors…will definitely come alive.”

Leader of Music Makers Keith Mason also expressed similar plans to this newspaper yesterday. He said the group will honour Junkanoo culture and remember those members who lost their lives this year by reflecting on past parades.

“We’re in the virtual parade that ZNS will be showing and they’re going to be featuring some of our better parades in the last ten years,” he said.

“And the steering committee, we plan to have a Zoom where we could watch them together and have a fun time online. We plan to do that and we’re also encouraging (members) to have a look and to reminisce on the past.

“Within the last year, we have lost about 10 to 15 members out of our group and you know, amidst all the joy you have to accept the pain but it’s good times where we could look back at some of our fallen heroes and some who’s not mentioned on a daily or annual basis so, it will be a bittersweet time as we reflect and look back and we see people in these videos who are no longer with us, but at least it will bring some joy to know that we had a good time with some of them.”

In July, the government made the decision to cancel all traditional Junkanoo parades in response to rising COVID cases.

Chairman of Junkanoo Corporation of New Providence Dion Miller told The Tribune last month that the organisation had planned several virtual events instead.

“You certainly would be seeing junkanooers submitting video testimonials and certainly we will be working with Junkanoo to rebroadcast past parades. It will be shown on TV,” he said.

The Junkanoo events will be broadcast on ZNS.

What utter nonsense. This government has killed the spirit of our Bahamian culture deader than "The Virus" ever could. Bunch of bozos concerned about oil drilling to make you rich should be more concerned over the loss of freedom in this Country. Rush Baby Rush!

You hear oil this week and something else the next week.

It has been shown that the Covid virus is a very very smart virus. It knows when people are eating inside or outside of a restaurant. It knows the time on our clocks and makes decisions on whether to strike at 7pm or after 8pm (precise to the hour), and it is wise to know that healthy salt air from beaches is very healthy indeed and chooses to hang out at beaches a lot. Perhaps it also has an artistic bent, and is attracted to bright colours?

Experts in the USA have already said that mask wearing will be needed until at least September of next year - so can we glean from that that the virus also has a plan to defeat the vaccine? I'm only asking. Every day there is a new report - one today said that by June over 500,000 Americans will die from Corona. It almost seems like the vaccine is going to make no difference whatsoever. Americans are being told they must take the vaccine, but are also being told that nothing will change.

Seems some individual or group are always sounding call remake our beloved Junkanoo into sometin or that? Let we sound call leave our Junkanoo damn well be. Shakehead a quick rungin' bell once for upyeahvote, a slow twice for not?