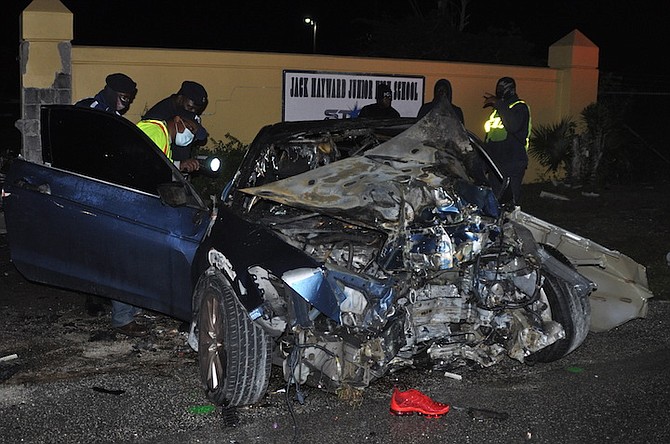 THE scene of a fatal crash in Grand Bahama in Settlers Way, after a car crashed into the wall of Sir Jack Hayward Junior High School. Photo: Vandyke Hepburn

TRIBUTES poured out on social media after the tragic deaths of a married couple who died in a horrific three-car collision on Christmas night.

Brent and Eulona Johnson, owners of “The Sweet Life” ice cream shop in the Mall at Marathon, died on the scene of the accident which took place at West Bay Street and Blake Road around 6pm Friday. Their children were also said to be injured in the accident.

The Johnsons were among five people who died within three days as a result of four traffic accidents across three islands.

According to police, a black Honda Accord, a burgundy Nissan March and a black Chevy Malibu were the cars involved in the accident. The Johnsons were driving the Nissan March. Police inspected the vehicles and discovered that six occupants of the various vehicles sustained injuries as a result of the accident.

The Johnsons were pronounced dead at the scene. Four others involved in the accident were taken to hospital to receive medical attention. Their conditions are not known at this time.

The Bahamas Lawn Tennis Association released the following tribute: “The entire tennis community deeply mourns the passing of Eulona and Brent Johnson. Brent was one of our top adult tennis players, winning multiple championship categories over the years in singles and doubles play. Brent served on numerous administrations in the capacity as treasurer and council member for the BLTA.

“Brent was also an ITF level one coach. Brent was affable, loving, sincere, and had a heart of gold. Eulona also had a love for tennis, playing tennis in college. The couple gave generously and unselfishly to the up-building of tennis in the Bahamas.”

Brent and Eulona Johnson were alumni of St John’s College and St Anne’s School, respectively. The St Anne’s Class of 1987 posted on Facebook: “Today the class of ‘87 mourns the loss of our sister Eulona Dean Johnson, who died last night in that fatal car crash with her husband, Brent Johnson, our brother from St John’s College. Join the class of ‘87 in expressing condolences to her family members and to offer prayers to the Almighty as Eulona’s children are still in hospital.”

Police also reported an accident which took place on Saturday shortly after midnight on S C Bootle Highway in the Leisure Lee area of Abaco.

This was a head on collision involving two vehicles – a 2020 Nissan Frontier Truck driven and owned by the Royal Bahamas Defence Force with two occupants and a black Honda Fit vehicle with five occupants.

Boxing Day saw another traffic tragedy with the death of a male, shortly after 9pm on Cathedral Boulevard in the area of Sir Jack Hayward Junior High School in Grand Bahama.

When police officers arrived on the scene, they found a two-door blue 2008 Honda Accord which had crashed into a concrete column at Sir Jack Hayward Junior High School. The vehicle was on fire.

Officers of the Fire Department were called in and were able to put out the fire and used the Jaws of Life to remove the man from the car.

The man was travelling east along Cathedral Boulevard when his vehicle ran off the northern side of the road and crashed into the concrete column. He died at the scene.

In addition, a 21-year-old resident of Sanderling Circle died at the Rand Memorial Hospital shortly after 7am on Christmas Eve after being involved in an accident on Friday, December 18. He was the driver of the car.

Police reports say shortly after 10pm on December 18, officers were called to the scene of the accident which took place on Queen’s Highway in the area of Hanna Hill, Eight Mile Rock. Two men in a brown Honda Accord were driving east on Queen’s Highway when the driver lost control of his car, collided into a chain link fence, hitting three vehicles and then crashed into a brick wall. Both men were ejected from the vehicle. The victims suffered serious injuries and were both taken to the Rand Memorial Hospital by EMS personnel.

In response to a spate of fatal traffic accidents, police are urging the general public to always wear a seatbelt and to drive within the speed limit.