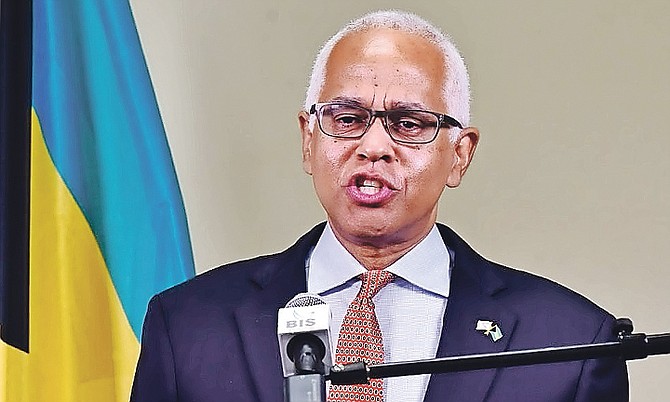 * 'Couldn't hold back any longer' on fare rises

* Airline may call on Treasury for extra $41m

A Cabinet minister yesterday said the Government had no choice but to increase Bahamasair's fares in a bid to contain "skyrocketing" losses that could hit $60m for the airline's current financial year.

Dionisio D'Aguilar, minister of tourism and aviation, told Tribune Business that COVID-19's devastating impact on the national flag carrier's already-precarious finances meant the Government "couldn't hold back any longer" on raising fares across all its domestic routes from January 4, 2021.

Conceding that the projected $50-$60m loss for the 12 months to end-June 2021 was "conservative", and could easily be exceeded depending on how quickly travel rebound in the first six months of the New Year, Mr D'Aguilar acknowledged that Bahamasair's 'red ink' represented a further bail-out call for already-stressed Bahamian taxpayers.

With just $19m in subsidies from the Public Treasury allocated to Bahamasair in the 2020-2021 Budget, Mr D'Aguilar's figures suggest the airline could call on taxpayers to find an extra $41m to keep it in the air just when the Government is straining to contain its fiscal deficit to the originally projected $1.327bn.

The minister added that the increases, which also for the first time introduce a $25 fee for the first checked bag on all Bahamasair's international routes, would bring the national flag carrier "more into line with its competition".

Noting that Bahamasair's fares have not changed in eight years, thus failing to keep pace with inflation and rising operating expenses, Mr D'Aguilar said that whether the increases produce a combined $7.5m rise in the airline's annual revenues depends on a recovery in passenger traffic which presently is "a sliver of its former self".

"As you can imagine, during this pandemic Bahamasair has racked up substantial losses," he confirmed to Tribune Business. "We won't know until the end of the year, when we see what the numbers are - we don't know what will happen over the rest of the year - but I would conservatively estimate the losses will probably be between $50-$60m.

"It's going to be substantial. The Budget called for $19m [in subsidies]. We're looking at every possible avenue to mitigate some of that loss. Even in the best of times, when Bahamasair had revenues circling $100m, they would lose or have a demand on the Treasury to the tune of $20m-$30m.

"Obviously it's revenue is a fraction of what it was, but fixed costs - payroll, debt, leases and rents - all remain constant. The losses have skyrocketed, and we're looking at any possible way to mitigate those losses through better revenue management," Mr D'Aguilar continued. "Owning airlines is a very expensive proposition especially when you don't have the volumes to cover fixed costs.;

"I believe the ticket prices at Bahamasair have been fixed for many, many years. We just couldn't hold back on that any longer. We're forced to do what we can to mitigate those losses. We had to introduce fare increases and a new bag charge."

Bahamasair did not detail the magnitude of the fare increases in its announcement, merely giving the new one-way and round-trip fares between Nassau and all the other islands starting from this coming Monday.

Research by this newspaper, based on a flyer found on Bahamasair's Facebook page, indicated the increases appear to be in the high single-digit percentages across-the-board. The ones calculated for Exuma and Eleuthera came in at rises of 8.3 percent and 9.4 percent, respectively, or increases of just below $20 for a round trip.

While such increases may not seem that significant, they represent a further rise in expenses for hard-pressed Bahamians - especially those in the Family Islands, who have traditionally relied on Bahamasair as a critical commercial link with Nassau.

"The airline has not had a domestic fare increase in the past eight years, and these adjustments have become necessary due to increased operational costs," Bahamasair said in a statement, while confirming there was no change to its domestic baggage pricing policy.

As to the $25 fee for the first checked bag, which will be implemented on all routes to the US, Cuba, Haiti and Turks & Caicos with effect from January 4, 2021, the airline added: "The adjustments to baggage fees allow the airline to better conform with industry standards."

They also follow the recommendations submitted to the Government by the PricewaterhouseCoopers (PwC) accounting firm, which was hired by the Ministry of Finance to conduct a study on how loss-making state owned enterprises (SOEs) such as Bahamasair can reduce the collective annual $400m-plus burden they inflict on Bahamian taxpayers to subsidise them.

PwC, which found that Bahamasair had not increased its ticket prices for eight years, called for the airline to better align pricing with the cost of service on its domestic routes between Nassau and the Family Islands.

Revealing that a $20 per return ticket increase had been recommended, Mr D'Aguilar in May's Budget presentation said this would boost Bahamasair's revenues by $3m per year. And PwC also urged the airline to target "ancillary revenue streams" by levying a charge for carrying passenger bags."

The minister said at the time these initiatives will increase the national flag carrier's annual revenues by $7.5m per year, but he yesterday conceded that achieving this projection in the short-term will depend on how quickly passenger numbers rebound.

"Traffic is a sliver of its former self," he explained. "It's contingent on volumes. With COVID-19 spread throughout the world, volumes will be down for the first quarter of 2021 and probably the second quarter.

"Until the vaccine gets some traction, and people feel comfortable to travel, tourism will be in a depressed state - albeit improving every day - but still in a depressed state." Mr D'Aguilar, while acknowledging that numbers were "nothing compared to 2019", said the week leading up to and through Christmas had been "the best so far" for the volume of health travel visa applications.

He added, though, that the financial blow-out from COVID-19 was "multi-faceted" when it came to the aviation sector, and had been "multiplied" by the impact on the Airport Authority, Nassau Flight Services (NFS) and the Nassau Airport Development Company (NAD).

All three were reliant on user fees, and passenger and/or flight volumes, which had almost completely dried up during the COVID-19 pandemic due to lockdowns, border curbs and other health-related measures.

Acknowledging that the Government's aversion to staff cuts, fearing this would worsen the economic and social fall-out, meant the losses incurred at Bahamasair were even more significant, Mr D'Aguilar said: "It's a high-fixed cost business, and the way you overcome that is through the volume of customers coming through your facilities, paying fees for that privilege."

The increased fares and baggage fees also represent a first step in the Government's efforts to ensure that state-owned enterprises (SOEs) also fully recover their costs, either through tariff rises or subsidy cuts.

At least something is 'Skyrocketing' with BananasAir. They should have stopped international service years ago and just stuck to local flights.

Government needs to get out of private business.

The PwC accounting firm is no doubt being paid handsomely to provide the Minnis-led FNM administration with the political cover it seeks for not doing the right 'economic' thing when it comes to the loss-making and bankrupt state-owned enterprises (SOEs) like Bahamasair, Broadcasting Corporporation of The Bahamas, etc. They should all be shut down (liquidated) asap - no questions asked!

Fess up minister Dionisio James as to breakdown as to precisely how much has it cost PopoulacesPurse have flown around to and out of the out islands and internationally, the likes of Mr. Minnis, his cabinet ministers, other members of the cabinet, government political appointees, spouses and lovers, government workers, consultants, and the politically entitled, etc, have all contributed to the total millions skyrocketing' Bahamasair Losses since May 10, 2017?
Maybe furnish a separated itemized billing calculation separately and apart just for the minister emself and co, and tourism and aviation em's people and consultants Shakehead a quick once for upyeahvote, a slow twice for not?

This is simple; close it down. how many cities and large towns around the world have their own airline and military? None, and this is the size of our country, the size of a large town or very small city in most other countries. Close it down, we cannot afford it. Forget the ridiculous national pride reasoning to keep it going.

Utter bs. The real reason is covid hurt your numbers making travel non existent Easter summer and thanksgiving. Didn't want to cut staff or salaries, so now to try make up you increase fares and baggage. I guess southwest doesn't conform to industry standards since they've been offering two free bags since forever

I will bet everyone who has been or is still employed in a high position at Bahamasair are 1000% richer as the airline becomes poorer, so where is the money going? 60 million in debt? No, 60 million deposited in the bank accounts of the people who are and who have been in charge of the airline from its inception.

This company has a horrible business model also. While many of the smaller airlines have resumed regular flights, Bahamas Air has not. They are having one flight a week to islands where other carriers are running 3 a day. This company is a drain on the country's finance. It needs to be revamped and run by actual business persons that will have regularly scheduled flights, cut down on employees, stop with all of these free trips to various persons to name a few or simply sell the company.