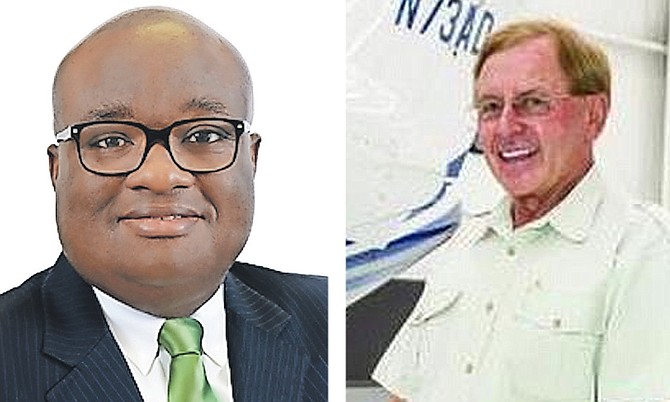 * Says Sky 'insolvent long ago' without his funds

Sky Bahamas' former principal says efforts by the airline's main financier to discredit him by instigating police probes in The Bahamas and US "shows the lengths they will go to damage my name".

Captain Randy Butler told Tribune Business that Fred Kaiser needed to "come head on with the facts" in court after it emerged the businessman has sought police investigations in both countries to determine the fate of Sky Bahamas' planes and aircraft engines said to be worth "millions of dollars".

Mr Kaiser, who is alleging that Captain Butler and former deputy prime minister, K Peter Turnquest, "conspired" to defraud him of almost $28m via so-called "sham loans" made to Sky Bahamas and its affiliates, claims he and his companies own the planes and engines which had only been leased to the airline.

Both Mr Turnquest and Mr Butler have vehemently denied the "sham loan" allegations, and the former was neither named as a defendant in that action nor has been linked to the investigation into the planes and engines. Captain Butler, meanwhile, told this newspaper he also rejected any claims of wrongdoing related to the police probes into the whereabouts of Sky Bahamas' former aircraft.

Tribune Business understands the US inquiry was begun before its Bahamian counterpart, and no findings or charges have yet been laid. The Sky Bahamas chief voiced surprise when contacted about the probe and nature of the investigation.

"That's amazing. All I can say is wow," Captain Butler replied. "Hopefully at this time I can depend on the justice system. These people, who use my name, they have to be willing to stand at that date and account. Make your claim to the relevant agencies, not the newspapers.

"That kind of stuff is stupid to me, all stupid. It's crazy for people to even put that stuff out there. It tells you what lengths people will go to damage your name. I have to put on my big boy trousers and understand the politics and stuff.

"I understand fully what has been threatened to happen to me by Fred Kaiser and his group saying I will have a death by 1,000 cuts, and they will do anything to discredit me. Fine, go ahead. There's no need to hide behind things; let's go head on with the facts. If I stop at every point a dog barks I won't get to where I'm going."

Captain Butler argued it was impossible for persons to "pass the title" to aircraft and plane engines they do not own as they all have serial numbers, with ownership recorded and detailed on registries in The Bahamas and other jurisdictions.

He challenged Mr Kaiser, as instigator of the investigations, to come with him to the various registries and identify the various engines and aircraft whose whereabouts the businessman alleges cannot be located.

Documents obtained by Tribune Business show that Mr Kaiser and his attorneys requested an investigation by the Royal Bahamas Police Force into the fate of the now-defunct airline's engines and planes on June 11, 2020.

Disclosing that he had acted for the company in purchasing US-based planes that were subsequently leased to Sky Bahamas, Mr Feldman wrote: "My client leased many millions of dollars worth of aircraft and engines to Sky Bahamas and, upon retaking possession of its assets, found that most of the engines were missing.....

"I have learned from Michael Scott, Bahamian counsel for Advanced Aviation, that many of the aircraft have been stripped of their engines and propellers, and that the aircraft carcasses are on the ramp at Lynden Pindling International Airport (LPIA)."

Mr Feldman said the number of engines found by Mr Kaiser and his agents when they took possession of the maintenance hangar formerly used by Sky Bahamas at LPIA "did not equal the number of aircraft engines that were on the aircraft at the time they were leased to Sky Bahamas".

Suggesting that no explanation had been provided for this discrepancy, he added: "At all times material they were - and remain - the property of Advanced Aviation. For the engines which were replaced over time, it is evident that there is no replacement engine present at the Sky Bahamas facility for any of them.

"Disposing of expensive engines without replacing them, to the detriment of the owner, in this case Advanced Aviation, is not a practice in the normal course of business........"

Other documents seen by Tribune Business reveal that the legal battle between Mr Kaiser and his former Sky Bahamas partners began almost 18 months ago, coinciding with when the Bahamas Civil Aviation Authority (BCAA) refused to renew the Air Operator Certificate (AOC) that was critical to enabling the airline to carry fare-paying customers "because it failed to meet basic staffing requirements".

With the airline losing a multi-million dollar sum, AOG Maintenance Company, the entity that owned the LPIA hangar and which had come under Mr Kaiser's control, moved in August 2019 to evict Sky Bahamas on the grounds that it owed some $204,826 in unpaid rent at the beginning of that month.

Captain Butler and Sky Bahamas, though, successfully counter-attacked in December 2019 by persuading Justice Keith Thompson to bar AOG Maintenance Company from denying it the ability to “access and remove its assets" from the hangar.

The injunction, which was obtained at a hearing where only Sky Bahamas' attorneys were present, also prevented AOG Maintenance Company “from selling the assets” of Sky Bahamas, “including but not limited to aircraft engines, propellers and gears contained inside the said maintenance hangars", or interfering with the airline's business operations.

Mr Kaiser and his agents swiftly sought to overturn the injunction, and were ultimately successful based on Mr Feldman's letter. Mr Kaiser, in a January 28, 2020, affidavit asserted that Sky Bahamas was "a defunct and inoperative" airline, while his Alpha Aviation entity had cancelled the plane leases "for non-payment of the aircraft hire" by the airline.

"It is not hyperbole to state that without me the plaintiff [Sky Bahamas] would have spiralled into insolvency long ago but, even more significantly, it would never have gotten off the ground," Mr Kaiser alleged.

"Indeed, I have been the essential banker and money man, and was such for the construction of the aircraft hangar at LPIA and, through Advanced Aviation, I financed the acquisition of the entire fleet of aircraft deployed by Sky Bahamas and which I subsequently leased to it to operate a commercial airline.

"Indeed, I have funded from inception through loans much of the plaintiff's operational and capital expenses."

"The injunction, which was obtained at a hearing where only Sky Bahamas' attorneys were present...". Just another example of how corrupt and twisted our legal system is. Foreigners get routinely bamboozled when investing here. No wonder foreign investment is only a fraction of what it could be.

Why is that corruption? Could it be that the lawyers for the other party may have chosen not to show up? Speculation without facts does no one good and only muddies the facts.

Sky's lawyers probably obtained an 'interim injunction'. This is usually done done by one side when the time is very short and they have trouble serving the other side. If granted, the injuction is only for a day or two so as to allow the otherside to be served and reply and have a chance to argue why the injunction should not be removed or that it should be lifted.

That what looks to have happened reading this article.

That won't scare any investors away.

Our immigrationDepartment policies and operation is what scares foreign investment away.

I have 1 question for the Financier...WHY? Why invest in this unprofitable airline? Something is rotten here..