Broughton Family Reach Out To Help Those In Need 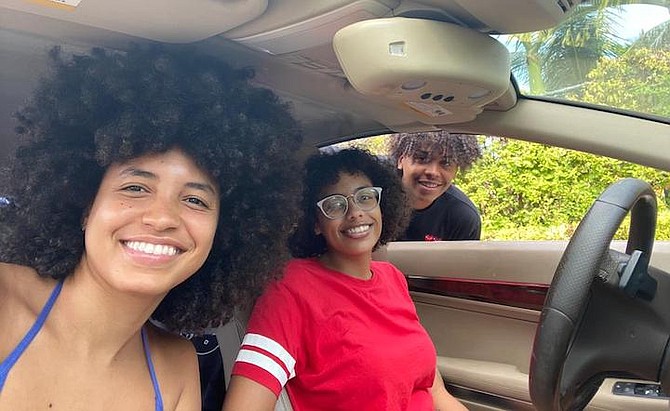 WHILE the COVID-19 pandemic brought lots of bad news and tragedy this year, it was also a time for the spirit of goodwill to shine.

With thousands of people losing their jobs due to business shutdowns and travel restrictions, the need for food and other supplies was great. Many of those who were fortunate to still have jobs and an income took it upon themselves to help where they could.

Attorneys Richard and Lucia Broughton and their children were some of those people. They rolled up their sleeves during the pandemic and assisted those in need.

The Tribune contacted Mrs Broughton to speak with her about her charitable deeds, but she had to be convinced as she said they preferred their good deeds to remain out of the limelight.

Mrs Broughton spoke of how it all started: “When we had the lockdown, people were saying that they were hungry and they could not get to the store and the lockdown was so soon and so we just went about helping them. First of all I posted that if anyone needed something they should let us know and they started messaging me and we just rallied the kids together, as they were home on break from the pandemic, we got some groceries together and started some deliveries.”

When things were really rough for many people in the country who were out of work due to the pandemic, the Broughtons used social media to find out their needs and got to work helping them for many weeks. As the song goes they “had a little help from their friends”.

She continued: “Five weeks during the most critical times when everything was shut down, it wasn’t just us, there were a lot of people who offered clothes, milk for babies. Dr (Duane) Sands’ wife, for example, had extra diapers and formula for newborns and a number of people just volunteered and gave stuff.

Mrs Broughton said they assisted people all over New Providence.

She explained: “We just made the post public on Facebook and one person after the other answered so we were all over. We were in Pinewood, in Bain Town, we were in the back by Joe Farrington Road; we were down by Cowpen Road. So wherever people were, we just got them to send us their location on WhatsApp and I delivered. At first it was just my daughter and me delivering and then I put the three kids, we have two daughters and one son, to do the deliveries.

“So we made a list and they would deliver the food. I was kind of hoping to get a food bank started, but when work started again, all of that got left behind. But I am still going to work on that. It’s still an idea to be pursued because there is definitely going to be a need for people to be sustained beyond this.”

She said Bahamians have been suffering economically for a while and the pandemic has only exposed the inequalities many face.

The food donations were a group effort, she said.

“There was actually another couple that was doing deliveries as well – Stacey and Dr Dwight Marshall. Sometimes we would meet up as I might have had some items that she needed and she would reach out to me. We would meet up and once or twice just to share some items so she could supply the people that she was assisting and vice versa.

“A lot of people pitched in. Our housekeeper was also very helpful with sorting items to pre-pack in bags for distribution. Her name is Sherona Bartley.”

In the end Mrs Broughton said it was really her children who were the superstars of their charitable acts. She said she did not have the luxury to go around delivering the groceries herself for several hours a day, so they had to be her “hands and feet.” She said when the children went back to school things dried up, but promised that she will forge ahead with her food bank.