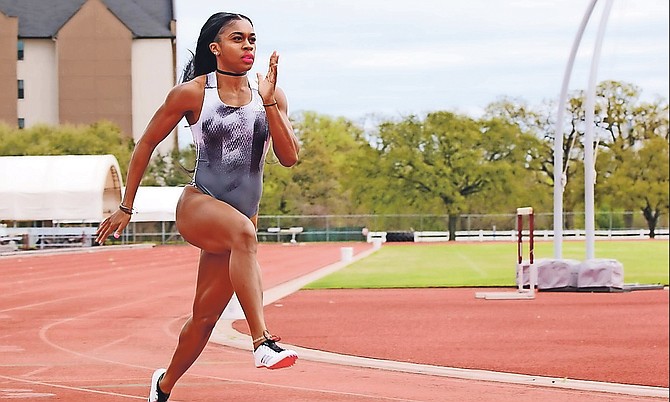 It was another successful weekend for a number of Bahamians, representing their respective college and university track and field teams at various meets around the United States.

At least two elite athlete competed as Tynia Gaither, representing Adidas, won her heat of the women’s 200 metres at the Houston G5 & Super 22 Invitational at the Yeoman Field House at the University of Houston in 23.97 for third place overall.

Gaither also finished fifth in the final of the women’s 60m in 7.44 with Lanece Clarke coming in sixth in 7.51. The duo went head-to-head in their preliminary heat with Gaither getting the better of the match-up with third in 7.44, followed by Clarke in 7.54. They advanced with the fifth and seventh fastest times.

At the Mets Indoor Championships at the Ocean Breeze Athletic Complex in Staten Island, Tiffany Hanna posted a victory in the women’s discus with her personal best toss of 17.81m (58-51/4) on her first attempt. Hanna was also ninth in the shot put with 12.26m (40-2 3/4) on her sixth and final attempt.

Etienne, however, was the winner of the collegiate section as London competed unattached. It was Etienne’s second victory of the season, coming off his triumph at the Hoosier Open at the same faculty on December 13, 2019.

And Southern Illinois’ sophomore Sherrod Corey won his heat of the men’s 400m in 49.50, but that only enabled him to secure 11th place overall.

Miller and Thompson second and third

At the Texas Tech Invite at Texas Tech University in Lubbock, Texas, Shaun Miller and Celine Thompson led the field of Bahamian competitors in action with their top performances on the field.

Kayvon Stubbs, a junior Oral Roberts University, was third in her heat of the women’s 200m, but was 24th overall in 24.28.

Sasha Wells, also a junior at Oral Roberts, was seventh in her heat of the women’s 60m hurdles for 13th overall in 8.38.

Stubbs (lead off) and Wells (anchor) were joined by fellow Bahamian Gabrielle Gibson, a sophomore, as they teamed up with sophomore Alexa Granderson for 11th place in the women’s 4x400m relay in 3:49.24.

Mott was also eighth in his semifinal heat of the men’s 60m hurdles in 8.22 for 16th place overall. He advanced out of the preliminary rounds with a time of 8.08, the 13th fastest and the fourth in his heat.

At the Razorback Invitational at the University of Arkansas at the Randal Tyson Track Center in Fayetteville, Arkansas, Doneisha Anderson, competing as a sophomore for the University of Florida, led the way for a number of Bahamians with fourth in the women’s 400m invitational in 53.26.

Purdue’s senior sprinter Samson Colebrooke had to settle for s fourth place finish in the final of the men’s 60m in 6.74. The race was won by Raymond Ekevwo, a senior at Florida in 6.53. Colebrooke advanced out of the preliminaries with the third fastest time of 6.72, while Ekevwo led the field in 6.63.

Oscar Smith, a freshman at Kansas State, could only muster an eight place finish in the men’s 60m hurdles final in 7.86. Eric Edwards, a junior at LSU, took the tape in 7.66. Smith had the third fastest time of 7.81, trailing Edwards, who had the best time of 7.72.

Two Bahamians clashed in the men’s triple jump, but it was Purdue’s junior Tamar Greene, who got the best of the matchup with a third place performance of 15.89 metres or 52-feet, 1 3/4-inches. Laquan Nairn, a senior at Arkansas, fouled out of the competition.