Insight: Kobe Was Delivering In His Greatest And Most Important Role - As A Father 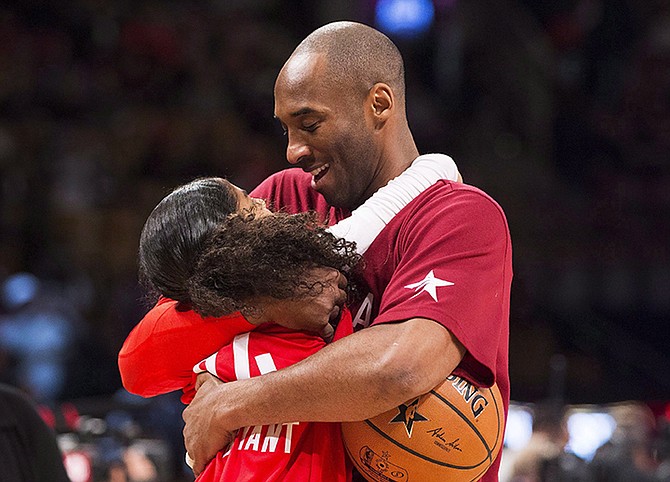 LAST Sunday, just over 2,500 miles away, The Bahamas felt like it lost one of its own with the passing of Los Angeles Lakers legend Kobe Bryant. Los Angeles, the state of California, America and beyond have been grieving since the news broke of his death, along with eight other people, including his young daughter and basketball prodigy, Gianna. Even in our tiny archipelago, far away, Bahamians who grew up watching the basketball wizardry any time number eight, and then number 24, stepped on the hardwood, were heartbroken.

Whether a Lakers fan or hater, you know The Bahamas - way before the rise of the Miami Heat - was a Laker Nation in its own right, with one of our sons in Mychal Thompson winning two championships with the Los Angeles Lakers in the late 80s.

With endless accolades – 18-time all-star, five-time NBA champion, one-time NBA MVP, two-time Finals MVP, two-time Olympic gold medalist, and many others – none of them may be more impactful than what we’ve saw in his retirement years - Kobe the father.

Sure, we saw when he won NBA championships in the post-Shaq and Kobe era, the elation and celebration with his family. We heard him discuss the importance of his commitment to family and fatherhood in countless interviews. We also heard him discuss the sacrifices he had to make to be recognised as one of the greatest NBA players ever. Therefore, in a 20-year NBA career, as much as the heart may want, his job by its very nature made it a top priority.

This is perhaps why his death has been so sad for so many people.

It is rare for professional athletes – who seem like superheroes to us - to pass away in their prime. Bryant’s former teammate, Shaquille O’Neal, even spoke to this same point when discussing his basketball idols and their accessibility, even in their golden years, in contrast with the void left by Kobe Bryant’s passing for younger players unable to gain from his basketball wisdom.

But then, when we consider Bryant’s iconic status as being more than a basketball player, and that of other larger than life figures throughout history who died in their prime, we begin to see a commonality.

Each of these individuals, blessed with a finite amount of time, passes through this world to teach us all something. And while Kobe would have been a generational basketball talent, he showed men how to be good fathers and family men.

Of course, his legacy will always have a footnote attached to it because of the legal issues back in 2004. However, his story is one of redemption.

In a world that suffers because of the absence of fathers, here is a man who meteorically ascended to the top of his profession, and at the end of it, revelled in what was sacrificed for such a long time – being a dad.

We should consider the societal risk of fathers being absent from their children’s life juxtaposed with Bryant’s former teammate, Derek Fisher, who shared his most lasting memory of his fallen brother and noted his desire to break this crippling trend. Fisher, this past week, recounted an intimate conversation between the two where Bryant - in so many words - told him that he pictured his daughters’ lives 20 years in the future after growing up in a broken home and immediately decided that that was non-negotiable.

Considering a divorce rate of 50 percent in America with people of African descent having a higher rate of ending their marriage than other ethnic groups in the US, there is certainly a challenge and a stigma associated with black men and black fathers.

Moreover, if you reflect on the crisis in America resulting from fathers being absent from their children’s lives, Bryant’s biggest contribution to the world may be yet to come.

According to the US Census Bureau, which compiled the following statistics leading to America’s father absence crisis, children growing up without fathers are at extreme risk of a number of societal ills.

Among them, they are four times at greater risk of poverty, seven times more likely to become pregnant as a teen, more susceptible to behavioural problems and more likely to be abused and neglected. Additionally, the risks of infant mortality and dropping out of high school are doubled, kids growing up without fathers are more likely to abuse drugs and alcohol, be imprisoned, become obese, and commit a crime.

Certainly, the role of a father cannot be diminished.

According to a report in a psychology publication, “Fathers and Their Impact on Children’s Well-Being”, “Even from birth, children who have an involved father are more likely to be emotionally secure, be confident to explore their surroundings, and, as they grow older, have better social connections.”

This information has also been supported by the University of The Bahamas study, “Our Prisoners”, where inmates at the Bahamas Department of Corrections referenced the absence of a father figure serving as an impetus for beginning a life of crime. Against the backdrop of a 700 percent increase in divorce rates from 1975 to 2005, which is undoubtedly higher now, 15 years later, The Bahamas is grappling with it its own crisis of absentee fathers.

Hopefully, while the up and coming generation of basketball players also try to implement their own versions of the “Mamba Mentality” to honour the sports legend, fathers and fathers-to-be would also want to emulate his dedication to his wife and daughters.

I’m positive, if Kobe had lived to watch all of his daughters grow up, he would have probably agreed that it was unquestionably his single greatest achievement – not just being a dad, but as he proudly identified himself, a girl-dad.

May the souls of Kobe and Gianna Bryant, John, Kerri and Alyssa Altobelli, Sarah and Payton Chester, Christina Mauser and Ara Zobayan, rest in eternal peace.

May his soul and the souls of all the faithful through the mercy of God rest in peace.

May all Roman Catholic say a Hail Mary full of Grace on their behalf.

Hard to believe that with all of his money he would buy an old jalopy Sikorsky helicopter without an early terrain warning system, especially given that he lived in one of the more hilly areas of LA.