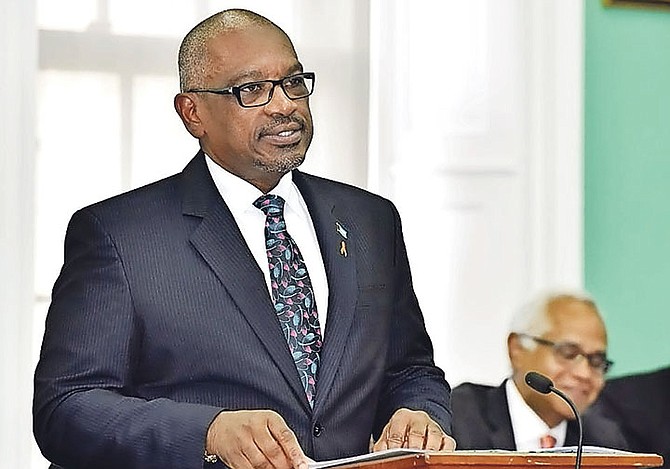 PRIME Minister Dr Hubert Minnis wants a “complete overhaul of the rehabilitation process” for prisoners, declaring yesterday too many people have been deprived of their freedom and future.

On Friday he met representatives of the Rehabilitation of Offenders Committee, which has the power to expunge records of young people and first time offenders who meet criteria. The committee’s work is a part of a package which officials hope will eventually include a parole system that would allow some prisoners to receive early release from prison.

“We want to give our countrymen a freedom and a future they have been deprived of because of minor offences and in some cases, decades old offences,” Dr Minnis said when asked yesterday about wider rehabilitation reforms.

“We need to reform the whole system so they can have a clean slate and their lives can begin again. We are a government of expanding freedom and creating better futures.”

Dr Minnis has especially stressed the role the Rehabilitation of Offenders Committee will play in expunging the records of people convicted of marijuana possession crimes.

“I met with members of the committee,” he told The Tribune. “It was just established by the FNM and despite what the PLP has talked about, they didn’t bring the committee forward to do what is necessary. We spoke about the progress they’re making and how they’re focusing on young people and first offenders. We promised them that we want to move forward not only with expunging records of people with marijuana, but many young people and first offenders with minor offences.

“The government will provide all the resources necessary for them to work: a secretariat, adequate staff, etc. There will be town hall meetings. We want to expunge the records of these young people so they can have a clean slate and get back into society and travel, find jobs, qualify for visas, etc. I am told this will impact thousands of young people and thousands of homes.

“When we came to office, we spoke about wanting to change lives and we made a promise and a commitment that we want to do so because in most cases, those affected are the poor and the marginalised. We made the commitment and now we’re making the changes.”

Paul Farquharson, chairman of the committee, has said he hopes its takes no more than between three to six months for applicants to hear from the committee after they submit an application.

Dr Minnis said he hopes to accelerate the process “as fast as possible so individuals lives can change and go on.”

“There are job opportunities in Abaco and Grand Bahama to come and as Bahamians they must be a part of the new revolution,” he said.

Under the Rehabilitation of Offenders Act (Amendment) 2015, people who have committed murder, manslaughter, treason, armed robbery, rape or possessed dangerous drugs with the intent to supply cannot have their records expunged. But after five years, most others are eligible if they are first-time offenders or were younger than 21 at the time of their first conviction. Dr Minnis said as the government looks to reform the rehabilitation process, it might be necessary to expand the list of serious crimes for which expungement of records cannot take place, citing human smuggling as an example.

They should not have been put in jail in the first place. doc should remember well when Mr Gray tried to stop a young main from the family Islands from going to jail how he acted. "{Like a real fool)

There is all ready a board that address this so doc is not doing anything new. even if his lying mouth says so.

He has just formed another unnecessary board like the office of the spouse.

The resulting guaranteed significant increase in crime should do wonders for the safety of Bahamians not to mention the security costs for local businesses.

The first to be let out of prison will be incarcerated family members of Minnis's friends, cronies and other political supporters/financial backers.

The U.S. State Department will now have good reason to issue more frequent and seriously toned travel alerts that take a great toll on all tourist dependent businesses and lower our government's recurring revenues. Of course Minnis's answer to declining recurring revenues is to simply borrow more money from regional and international lending agencies. That we know!

Minnis is truly a certifiable lost cause.

The act was passed in 2015. doc what about that you do not understand? The FNM was not the Government in power. A masterful liar indeed.

Doc wants to be PM at any cost. May Doctor Nottage soul rest in peace.

Bahamians should not be allowed to have a fresh start. That is only for foreigners.

Doc is late indeed it 2020 and he is just meeting with the committee?

doc is in an election fervor.

It' should've, could've been good day for the far to many comrades with criminal records for simple possession weed to hear the colony's red government is claiming they going recognize and remedy the harms that have been done by criminalizing over years thousands PopulaceOrdinary, and visitors alike - but with all due respect, the colony's prime minister - has been much more successful at being major player over past 7.8 years n jailing others - than with the much difficult failure he always seems have when it actually comes time seeing his promises through to reality?

Early release of offenders from Foxhill...impacting thousands of young individuals and thousands of homes getting jobs and travel and get visas is not automatic or being a major issue of getting them early out of jail. Main issue is to improve their lives and Bahamas.