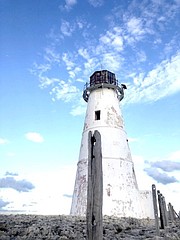 The lighthouse on Paradise Island.

A Bahamian entrepreneur yesterday voiced optimism that his planned $2m transformation of Paradise Island's western tip will "energise the restoration of other historical sites" throughout this nation.

Toby Smith, principal of Paradise Island Lighthouse & Beach Club Company, told Tribune Business his eight-year dream for restoring the derelict lighthouse that marks Nassau Harbour's entrance, and creating a "get-away" destination for Bahamians and visitors alike, was now within reach after a preliminary agreement was signed with a key government agency.

He added that the Memorandum of Understanding (MoU) secured with the Antiquities, Monuments and Museums Corporation (AMMC) had given him the platform to obtain all other necessary government approvals for a project that will create at least 40 jobs in both the construction and full-time phases.

Mr Smith pledged to create "a truly unique experience" at Colonial Beach that will blend Bahamian history and culture with the typical offerings of a 'beach break destination', adding that he wanted the proposed project to become "an example of what Bahamians can do when we pull together to support each other".

While other Bahamian entrepreneurs have tried, and failed, to pull-off similar ventures targeted at Paradise Island's western tip, Mr Smith said he had promised his late father he would succeed, asserting: "I don't give up."

Tribune Business, though, understands that Mr Smith may have substantial competition for the Crown Land he needs to obtain for his venture from Royal Caribbean Cruise Lines (RCCL).

This newspaper revealed last year how the cruise giant was quietly acquiring real estate at Paradise Island's western end to develop its own "beach break destination" for its passengers, and recent developments suggest it may by moving closer to its goal.

Tribune Business understands that Royal Caribbean may have spent as much as $54m in purchasing privately-owned properties to the west of the Yoga Retreat. It is thought to have recently purchased the Beach House Villas property developed by Sterling Global Financial chief, David Kosoy, and may not be stopping there.

The Prime Minister's Office has yet to reply to Tribune Business questions, submitted last week, asking whether Royal Caribbean has applied to either acquire or lease around ten acres of crown land running further west on Paradise Island that would bring it close to the site eyed by Mr Smith for his project.

A spokesperson said the inquiry had been referred to the Bahamas Investment Authority (BIA), and they were awaiting a reply. However, multiple well-placed Tribune Business contacts, speaking on anonymity, have suggested the Government is using Royal Caribbean's desire for a Nassau Harbour destination as "leverage" in negotiations over the Grand Lucayan's sale in Freeport.

This newspaper was told that the Minnis administration will not give the final go-ahead for Royal Caribbean's Nassau project until the deal for its $275m overhaul of Freeport's "anchor" property and harbour is sealed.

The cruise line is understood to have taken a tough approach to the Freeport negotiations, and the length of time taken to close the sale - it is almost a year since the Letter of Intent was signed - is thought to have frustrated the Government. "It wouldn't surprise me because of their procrastination," one source said of using Nassau Harbour as leverage with Royal Caribbean.

Mr Smith made no mention of Royal Caribbean's potential rival plans when announcing his project, or in the subsequent interview with Tribune Business. He indicated his interest in reviving the 200 year-old lighthouse dated back to well before the cruise line's emergence.

"Besides some of the forts, the historical icons in our country are often falling into disrepair, and the lighthouses especially have been on a gradual decline with the exception of Elbow Reef Lighthouse in Hope Town, Abaco.

"Other lighthouses have become automated and, in some cases, abandoned. Why is it not me that steps up to the plate with a genuine interest and love for our Bahamian history?"

Taking his plans a step further, Mr Smith said he decided to expand to the project to a multi-faceted 'beach break' destination at Colonial Beach due to the erosion of Bahamian beach access.

"A lot of Bahamians simply no longer have access to the beaches I used to frequent when I was a child," he explained. "Major developments have changed simple beach-going activities for Bahamians and our guests.

"I believe the success of Harbour Island and Abaco is the fact visitors and Bahamians can rub shoulders, share a laugh, and tourists can see first-hand Bahamian culture in a relaxed environment next to our biggest the asset, the ocean."

Mr Smith said his proposal offers "a truly unique experience that will be safe, affordable, and what's going to be best for Bahamians and best for The Bahamas". Besides the traditional food and beverage offerings provided at such destinations, he added that the project will be "inclusive of Bahamian talent and culture".

Two docks will be constructed to provide access to the site for guided historical and educational tours, which will feature the 203 year-old lighthouse as its centrepiece. Mr Smith said he plans to fully restore the property to working condition, complete with lighthouse keeper's quarters.

Visitors and Bahamians alike will be treated to demonstrations of straw work, and other traditions such as roasting peanuts and fabricating cow bells. A resident artist will be in place, and nature and bird watching tours will also be offered, with rake n' scrape and Junkanoo rush outs also among the features.

Mr Smith said the project will incorporate renewable energy, and would also seek to become an evening destination. "I want to connect with people and make it inclusive," he explained, "where they feel a sense of belonging and are contributing to the revival. I'm also not going to include a gratuity. I want the staff to be engaging, friendly and hospitable."

The construction phase will create jobs for the likes of architects, plus skilled craftsmen such as carpenters and plumbers, given the need to construct facilities such as pop-up shops, a bar and restaurants. Full-time opportunities would involve chefs, boat captains and crew, beach and maintenance staff, and managerial and supervisory positions.

"I want this to hopefully energise others to restore historical sites, especially the lighthouses," Mr Smith told Tribune Business. "I think it's extremely important for the younger generation to be guided and taught to look after our history.

"If the example given is to let these things fall apart, and to not have national pride, we're descending on a slippery slope. How can we expect the younger generation to look after things if they're not taught how to do it in the proper way?"

Mr Smith has been heavily involved in the preservation of Bahamian landmarks, having sculpted Ringo the Flamingo with his daughter and also restored some of Steve Burrows' sculptures (the Conch Shell and White Crowned Pigeon) on John F. Kennedy Drive and the restoration of the Steam Roller on Thompson Boulevard.

"It has been my dream for years to become the lighthouse keeper of this lighthouse, and it has been a long road in bringing this project to fruition. I am overjoyed that the Government of the Bahamas has signed our Memorandum of Understanding with Paradise Island Lighthouse & Beach Club Company," he added. "We look forward to breaking ground in the very near future.

"Each component of our team is Bahamian, and we are all excited to launch this project and be a 'shining' example of Bahamian pride. Historical preservation and rich Bahamian culture shall run through the veins of this low impact, sustainable tourism product."

Amazing stuff. This certainly needs to be done. I can foresee a zip-line as a fun way to get back down from the lighthouse. My one worry is when those big northerly swells come in (thankfully not so often) and the pounding the north side takes when they do. I wouldn't put much infrastructure on the northern side for that reason.

A return comrade Imperialists red shirts to governing power by voters come general election will be final retreat by the natives toward the final surrender ownership colony's capital town and out islanders - with the final signing over what little remains left ownership private islands, beaches, waterfronts stretching from Cable Beach to the Montagu Fort, the choice lands likes Bay Street, the lighthouses titles - over to the foreigners, the major cruise corporations. Should voters renew governing mandate Imperialists red shirts will have completed sale, gifting entire colony by end their 5 year governing mandate. It is be so transacted, yeah, no?

As long as investors do not bring the slave crap into it - where it has no place and never belonged. There is enough polarisation based upon lies and conjecture - most absolutely historically wrong but introduced in a political sense to stir up the pot and poison young minds.

Denying the responsibility and horrors of slavery cannot erase or change history!