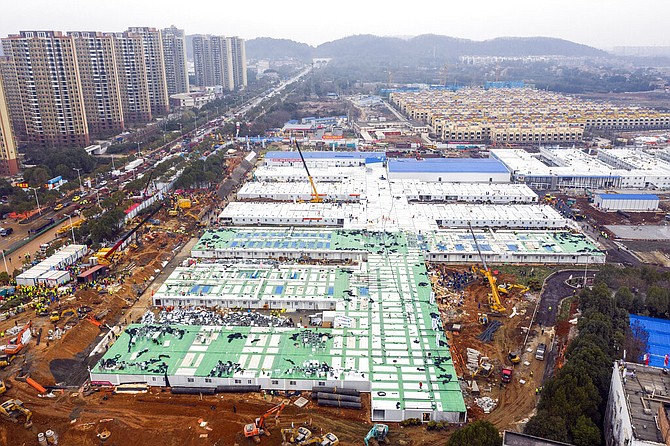 The Huoshenshan temporary field hospital under construction is seen as it nears completion in Wuhan in central China's Hubei Province, Sunday. (AP)

HAIGANG Yin, the Chinese charge d’affaires to The Bahamas, said China does not support the travel restrictions The Bahamas and other countries have implemented to combat the spread of the new coronavirus, insisting his country has the disease under control.

“We noticed the travel ban from the Ministry of Health of The Bahamas,” he said when contacted yesterday. “We are currently talking about this with officials from your government and we have reminded them that the methods taken by the government are not in line with the recommendations of the director general of the World Health Organisation and those methods have some influence on the travel plans of both Chinese and Bahamians.”

Australia, Indonesia, India, Israel, Italy, New Zealand, the Philippines and the United States are among the many countries that have implemented travel restrictions because of the new strain of the coronavirus, which has killed 426 people and infected 19,855 others up to press time.

The Bahamas is denying entry to non-residents who visited China as of January 11. Returning residents will be quarantined for an incubation period of 14 days.

The WHO declared the coronavirus a public health emergency of international concern last week. At a press conference announcing that decision, Professor Didier Houssin, chair of the emergency committee of experts, questioned countries’ decision to impose travel restrictions. He said: “Why have you taken this decision? What is the science supporting this decision? Could you reconsider this decision? And we suggested to WHO that WHO should inform the world about transparency concerning these measures which should not constitute an example to follow but a decision to reconsider.”

Fears have nonetheless risen that the coronavirus could become a pandemic. Even Hong Kong has tightened movement of travelers from mainland China across its border.

Some Bahamian residents have been banned from flights traveling through the US as that country denies entry to people from China.

Mr Yin said: “We have talked with officials about providing assistance to passengers affected and the embassy has advised the Bahamian side to lift the travel ban once the situation in China is contained. The Chinese government with the support of the Chinese people are taking strong and effective measures to contain the virus. This situation is improving. We are confident that this virus will be contained and eradicated. Also, the Bahamian side has commended the measures taken by the Chinese government and is also confident about the efforts of the Chinese side in containing the virus.”

Coronavirus fears have fueled xenophobia in some parts of the world, according to reports. Brian Wong, president of the Chinese Community Association of the Bahamas, said yesterday that Chinese restaurants have experienced a decline in business which they attribute to rumours about the coronavirus.

“I have heard rumours of that in other countries and Europe, but I have never heard anything happening in the Bahamas. At this moment, all from the press and the Bahamian society is that there is a regret for what is happening in China and their is support to the Chinese people. I haven’t heard any anti-Asian or anti-Chinese sentiment. We understand that many countries are taking some precautionary measures to protect their borders but we believe the measures should be reasonable and should not affect the normal people-to-people movement. Otherwise, those governments should follow the situation and review their policy and lift their measures as soon as possible once the situation improves,” he said.

The New York Times reported yesterday that the number of deaths from the coronavirus in China has exceeded that of the SARS outbreak. Three hundred and forty nine people died in mainland China from SARS between 2002 and 2003. That disease killed 774 people overall, with most other deaths happening in Hong Kong. The New York Times reported that a number of people have recovered from the coronavirus in recent days, with the disease having a mortality rate of about two percent compared to SARS’ death rate of 9.6 percent.

Why hasn't Minnis publicly announced that the travel restrictions imposed by the Bahamas government to protect the Bahamian people will remain in place until such time that we (the Bahamas) no longer consider them necessary and that we will be taking our cue from developed countries like the United States that have imposed their own similar travel restrictions?

PM Minnis, who is a medical doctor, should be publicly telling Red China's charge d’affaires to The Bahamas in no uncertain terms to butt out of our national affaires. You only have to look at how the ruthless Xi-led communist regime are treating their own people in Red China that have exposure to the highly infectious and deadly Coronavirus to understand why the travel restrictions imposed by the Bahamas government, albeit on a late basis, are so vitally important to protect all of us Bahamians.

It's becoming increasingly clear that Red China is now viewing the Bahamas as a colony rather than a sovereign nation and we have successive corrupt PLP and FNM primeministers to thank for that.

And likewise the Bahamas ambassador to the U.S. should not publicly complain when on U.S. soil about the U.S. State Department's announcement of travel advisories as a result of our government's many failures in combatting violent crime. Sovereign nations have every right and in fact a duty to protect their own citizenry from physical and health risks posed by other nations.

Since China values access to capital markets far more than human life, it is not surprising that they would seek to protect the former at the expense of the latter!

So China is talking with officials of the Bahamian govt and they are talking to the press and WHO. Time to have Minister of Foreign Affairs to tell them to stop embarassing the govt by going to the press. Erry Bahamian done know they have little space at PMH cause it done jam up with non patient free apts and have few beds for patients. Better to stop at best people at Airpprt and best efforts also try stopping people trying to not pay full Customs duties sneaking through.

because they only got 10K at the point and they need to get another 10K there before summer comes.....

Mr. please go sit down! Yinna does take Bahamian people for fools. We don't want NOR can we handle that virus! Sorry.... non residents need not come. Let me tell you, we are ill prepared for that virus!