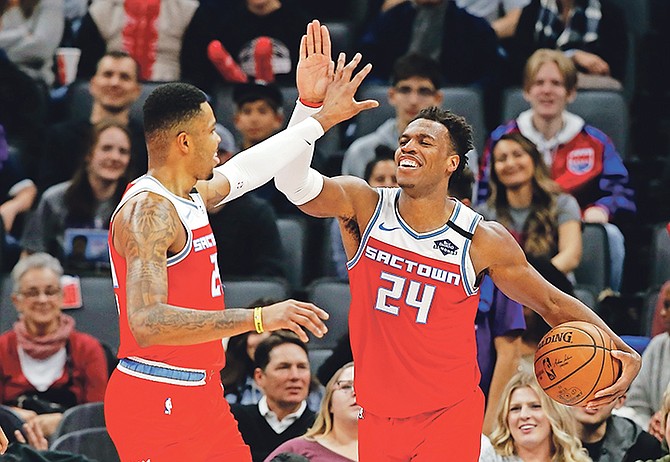 Sacramento Kings’ Kent Bazemore, left, and Buddy Hield celebrate in the closing moments of the Kings’ 122-102 win over the San Antonio Spurs in in Sacramento, California, on Saturday, February 8. Hield became the fastest player in NBA history to reach 800 career 3-pointers, doing it in 296 games. (AP Photo/Rich Pedroncelli)

The crowd at the Golden One Center in Sacramento, California, exploded with chants of “Buddy! Buddy” as Buddy Hield put on an historic shooting performance and reached another NBA milestone from three-point range.

Hield shot 9-10 from beyond the arc and scored 31 points in the Kings’ 122-102 win over the San Antonio Spurs on Saturday night.

In the process, he became the fastest player in NBA history to make 800 career three-point field goals. He accomplished the feat in just 296 games to surpass the mark set by Golden State Warriors’ guard Stephen Curry, who did it in 305 games.

“Coming from where I came from, I never thought I would be the fastest to get there,” Hield told the media after the game. “God has blessed me so much, can’t thank him enough. I just have to stay humble and keep working.”

The Kings have now won six of their last eight games to improve to 21-31 on the season, but are still five games behind the Memphis Grizzlies in the race for the eighth and final playoff spot in the Western Conference.

That win streak has coincided with Hield’s move to the bench in a sixth man role. Since his first game this season as a reserve (January 24), Hield has averaged 23 points per game, on 52 per cent shooting from the field and 51 per cent from three-point range (44 made three pointers).

His numbers increased across the board from the 17.3 points per game and 43.1 per cent shooting in his previous seven starts.

“I’m always going to play with confidence, whatever shot I can get, I try to take the most efficient one I can take. The group that we had out there, there were guys that defend, get in the passing lanes, I was the scorer in the group so I just tried to pick my spots,” Hield said.

“We defended, we rebounded, we shared the ball, just competed and we made shots. When you make shots I think the ball moves around easier, everyone gets more confidence and we get that spark that we need. Hopefully we keep this up and build from there.”

The Kings were in the midst of another slow start, - 4-16 from the field - and trailed by five when Hield made his first shot. His three at the buzzer gave Sacramento a 24-23 lead at the end of the first.

“He’s a great shooter and normally when you have a great shooter that works as hard as Buddy does, if they’re in a shooting slump they shoot their way out of it and he’s done a nice job of staying with it, he never loses confidence,” Walton said.

“We continue to work with him on where we want him to get those shots and how to use his shotmaking ability to create for others. You just have to give him credit, some of those he’s taking are tough. I’d like to take credit as a coach but it’s nothing I’m doing, it’s him out there making plays. It’s finding that balance and that gunslinger mentality that makes him great and makes him so hard to guard. It’s also finding the discipline and balance within the offence and that’s something we continue to focus on.”

Hield is the only leading scorer for any team in the NBA to come off the bench.

“He’s embraced the role as far as the way he’s playing and I think tonight was a great example, he came off the bench but he played 32 minutes and played more than the starting guards.

“Again, it’s being a team and whoever has it going that night is going to finish games. He hasn’t complained once about it and he’s been playing great,” Walton said.

“As a coach you sit back and say it’s great, we’ll win a lot of games if he shoots 90 per cent from the three-point line every night. He hit and took some tough shots but I really think he did an incredible job of playing with the group, of playing off the ball and letting the ball get swung around to the second side.” Hield accepted an invitation to compete as a member of the eight-player field in the 34th MTN Dew 3-Point Contest at State Farm All-Star Saturday Night, to be hosted February 15 at the United Center in Chicago, Illinois.

Other participants include Joe Harris of the Brooklyn Nets, Damian Lillard of the Portland Trail Blazers, Trae Young of the Atlanta Hawks, Davis Bertans of the Washington Wizards, Devonte’ Graham of the Charlotte Hornets, Zach LaVine of the Chicago Bulls and Duncan Robinson of the Miami Heat.

All-Star Saturday Night will air live on TNT and ESPN Radio in the United States at 8 pm ET. NBA All-Star 2020 will reach fans in more than 200 countries and territories in more than 40 languages.

Through 52 games this season, Hield is averaging 20.5 points per game and is shooting 39 per cent from beyond the arc, making 3.8 field goals in about 10 attempts per game.

One of the league’s sharpshooters throughout his career, Hield has made at least seven threes in five games this season, highlighted by a Kings record 11 threes in a 41-point effort against the Boston Celtics on November 25 and nine makes in a January 27 game against the Minnesota Timberwolves when he scored 42.