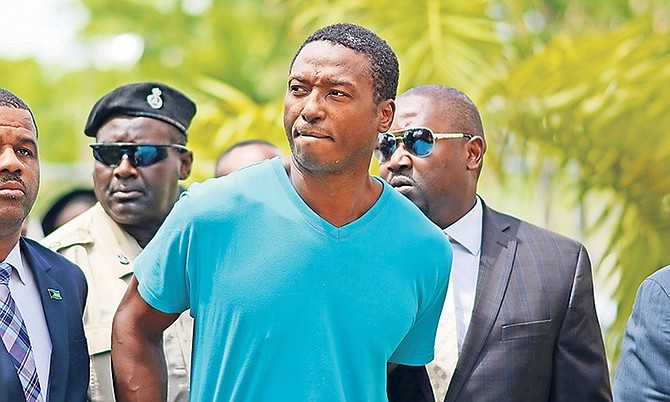 A MAN was sentenced to over 30 years in prison yesterday for murdering the aide-de-camp to former Governor General Dame Marguerite Pindling over a year ago. Justice Bernard Turner sentenced Timothy Cole to 33 years behind bars for murdering Inspector Carlis Blatch in September 2018.

Cole was also sentenced to an additional 18 years for robbing the senior officer at gunpoint during the fatal encounter. The sentences are to run concurrently.

Cole’s sentencing came a little over a year after Insp Blatch was shot in front of his daughter while they waited in his car outside H O Nash Junior High School to pick up his son.

Assistant Commissioner of Police Clayton Fernander said Insp Blatch was on-duty at the time of the incident, but had “slipped out” to pick his children up from school.

At the time of the incident, Insp Blatch was said to be sitting in his vehicle with his 13-year-old daughter, waiting for his son who attends H O Nash Junior High when a man, said to be Cole, approached him and pointed a gun in his direction. He ordered Insp Blatch to get out of the car, then shot him. The gunman subsequently pulled the officer out of the car, got into the vehicle and drove off. Before that happened, however, Blatch’s daughter got out of the car and ran for help, police said.

Insp Blatch was transported to Princess Margaret Hospital, where he died.

That night, the Ministry of National Security confirmed that an island-wide manhunt was underway for the gunman. Police meanwhile issued a sketch of a suspect being sought in relation to the shooting.

Cole was charged with Insp Blatch’s death just four working days later. He was also accused of armed robbery in relation to the theft of the officer’s Hyundai Elantra that was worth $19,000 along with a Samsung Note 8 worth $600.

Insp Blatch was immediately remembered for his professionalism after the fatal shooting.

A statement from the Office of the Governor General noted that the officer was stationed at Government House for the 14 years leading up to his death, serving with distinction as the officer-in-charge of protocol, then as aide-de-camp to the governor general.

He was a fixture at the side of Dame Marguerite and worked very closely with her on official matters.

“His service at Government House was marked by his expert understanding of the procedures which attend the affairs at Government House, and as ADC to the governor general. He always took great care to pass on his expertise to other staff, among whom he was highly regarded. His interactions with the public also made him respected and admired,” the statement noted.

Meanwhile, former Governor General Sir Arthur Foulkes called Insp Blatch a “gentleman to the fingertips”, adding that he knew Insp Blatch “very well and had the highest regard for him”.

“He was a decent human being,” Sir Arthur said. “He was a gentleman to the finger tips and he was admirably suited for the job he was in. I worked with him for several years and it is a great tragedy and I’m very disturbed about this. He was there for the entire time I was there, the four years. He was perfect for the job for that particular field, protocol and diplomatic protection. He was always in place and he always did the right thing at the right time. He had the right personality for it.”