Davis Puts His Case To Be The Next Prime Minister 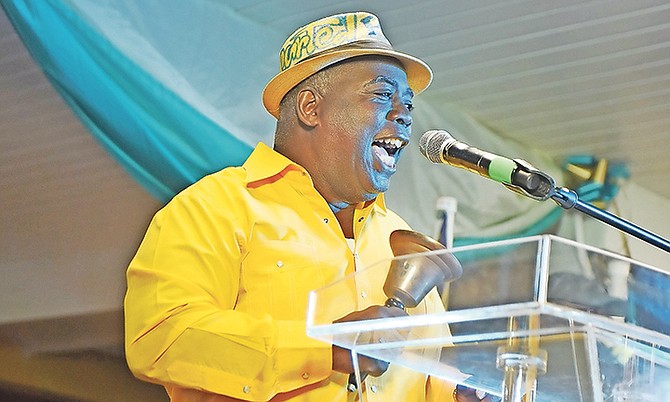 The Cat Island, San Salvador and Rum Cay MP peppered his speech with familiar attacks on the Minnis administration, mocking the party’s 2017 general election slogan, “It’s the People’s Time,” and bashing the administration for its handling of Hurricane Dorian recovery efforts, the controversial Oban Energies agreement and the leasing of the Town Centre Mall to host the General Post Office. The mall was part-owned by St Annes MP Brent Symonette, who was minister of financial services when the lease was signed.

Mr Davis weaved his backstory of growing up poor into a narrative of wanting to uplift others through policy. “My grandfather could not read or write,” he said. “He and my grandmother were subsistence farmers on Cat Island. And my father and mother left at the age of 13, barely literate. For most of my young life, I lived in Rolle Avenue. So when I talk about our Over-the-Hill communities, I know what I’m talking about. No ‘silver spoon’ for me. I have worked and lived among you my entire life. I know what it is to go to work, mixing mortar in the heat of the day, hoping and praying to get an honest pay at the end of the day. I know what it is like to have one good pants and busted shoes. When I see a child walking in the road because he doesn’t have any money for the bus, I’ve been that child. I know what he’s thinking. I know what his parents are dreaming about. And I know the barriers that are standing in his way - and I want to knock down those barriers, give him a chance that education afforded me. I want all Bahamians to live lives of dignity and purpose, not just the ones born to wealth or privilege.”

With two years to go before the next election, officials said they used the event to test their organisational skills and assess the appetite of their supporters.

Barry Griffin, a national vice party chairman and chairman of the committee that planned the rally, said turnout exceeded expectations. “We’re still very far out from the heightened political season,” he said, “and so this really was a tester to feel out the country to see where they are politically and I think this blew our expectations out of the water. The crowd is enormous, more than we could’ve expected. We are happy with where we are. It shows people are not content with what’s happening now with the government and they are coming out and vocalising their support for the PLP.”

Every once upon a time illegal Haitian alien who has since by hook or crook acquired the right to vote will be voting PLP in the next general election. And many mixed-blood Haitian-Bahamians with the right to vote (even the ones Minnis thinks are on his side) will be supporting the PLP. Davis has all but publicly promised the Haitian community in the Bahamas that he will be 'their' flag carrier if he becomes PM and they believe he's the best one to help them continue their invasion of our country.

And Minnis, like Davis, keeps kowtowing to our illegal Haitian community.

It's a sad day when this is one of the options we have to 'run' a country. I say 'run' because we know how it will go down - money flowing out without any paperwork and borrowing from anywhere so that they don't have to tax their supporters anything. The quiet talk in the PLP cabinet meetings about not having enough money to do anything they promised is... "don't worry just borrow from wherever we can: the FNM will sort out the finances when they get back in. Until then... cheers MOFO, we got our piggy bank back!!!"

Evidently this gentleman is continuing to abuse medicinal marijuana. He has to be when such statements of fantasy are flowing from his mouth. Lacking charisma, intelligence, ethics and morals, this gentleman is certainly not ready, qualified or capable of leading our nation. The inside word in the PLP is that Mr. Christie is using him and that when the election season starts, Mr. Davis will be forced to stand down. This is after the polls show that Bahamians cannot get their heads into voting for him or the Bahamian Buttigieg. He should ask his physician to reduce his dosage.

just cus the present prime minister is AFlucking IDIOT it doesn't mean that we want to replace him with another FLUCKING IDIOT!!!

walked and lived amoungst the people your entire life?? where do you live now and how long have you lived there and why don't you have to use public outside hole in the ground terlit when you have to pee at night??? Lives with the people please this is a stupid lie anyone who didn't graduate with A "D" should see right through it....

Davis does not respect or love this country enough to step aside and allow another generation of leaders to emerge. He cannot see that his blind ambitions are in his own person interest, not the national interest. That disqualifies him from ever getting my vote!

Sure looks the Swimming Pigs looks the best chance of winning next election along with a number of Independants.

♡The swimming pigs are very intelligent. ♡The swimming pigs have been earning their keep and having foreign people want to pay money to see them and travel from all parts of the world to see them spending millions and millions of dollars revenue. ♡Swimming pigs are satisfied with few fruits and vegetables, not expensive upkeep. ♡The swimming pigs have created the greatest employment of Bahamians from the taxi driver carrying tourists to airport to see them. ♡Employment of Bahamians staying at hotels, employment of staff at Marinas, ♡phenomenal millions of advertisrming of the Bahamas and beautiful waters all the selfies photos shared around the world bringing more tourists. ♡Banks, atms banking industry get business from Tourists using Bahamian banking facilities. ♡Hotels get revenus from guests coming to see swimming pigs. ♡Shops get sales of sun tan .otions and even strawbaskets with swimming pigs design on it. Never seen any politician image on any nations straw basket.

The Swimming Pigs looks like the most best likable candidates.

That's an outright racist remark that you should really take back with an apology.

I hope you're being ironic.

Give me a freedom of information act and campaign finance reform and I will gladly take it back.

“Gravy” Davis wants another turn at the buffet, but this time with a bigger spoon!

“Gravy,” not “Brave” ... his nickname has been updated to reflect reality.

Swimming Pigs certainly are the front runners going into the next general election.

Last election I saw no one worthy enough to go vote for.

Looks like I won't be voting next election either....

Get your butt to the polls come election time and vote for the independent candidate if he or she is a person of good character with no close ties with or past baggage relating to either the PLP or FNM.

Another "old" man with no new ideas. This country is doomed.

Comrade Economist, where's the win for "Brave" who just week back criticized the colony's prime minister for switching into general election mode - to follow the PM with still 2 years go before constitutionally mandate general? To that end, the PopoulacesOrdinary are feeling, they've been isolated away from the governing conversation and don't recognise - either two mainstream political parties as revolutionary deserving be returned seats power. Besides, enough with party leaders wearing their relics political colours - uniforms.

The PLP needs to get rid of Gravy Davis ……….. Run Chester and Gowan Bowe against the FNM ……….. Even PLPs are sick and tired of the neo-ROOTS message about Oban and Brent

But as long as Fweddy is their National Chairman, their playbook will remain stuck in the 1980s.

Chester....NEVER....he's about as corrupt as they come!

This is what happens when both political parties are close shops.They are controlled by party insiders.Leaders are selected for other reasons than intelligence,charisma and knowledge.

A lot of persons who studied and lived aboard,if they return to the Bahamas are increasingly frustrated by the political system here.

Put the bell down - only colony's prime minister - gets decide on the date rungs general's bell. - besides the PM has the exclusive copywriter be telling the poor boy's story?
Would've thought before comrade "Brave," went about prepping PLP a general - just maybe he should've first gotten the PLP's - www.myplpbahamas.com - up and operational?