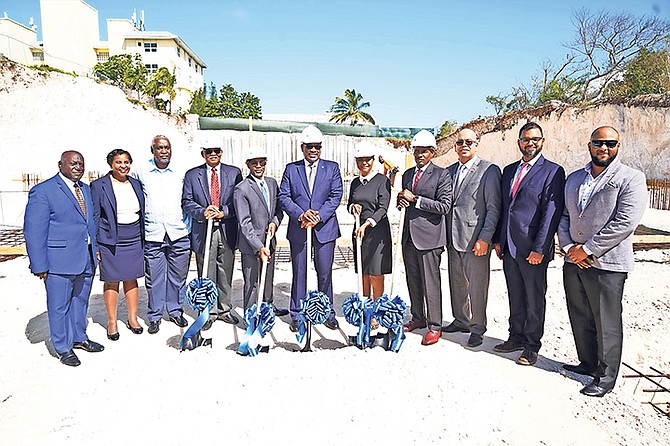 An “ambitious” Bahamian financial provider sees its “new mission” as tripling assets under management to $3bn within the three years to 2024 via a mixture of local and international expansion.

Sean Longley, the Leno Group of Companies’ founder, yesterday told Tribune Business its real estate development subsidiary will become “a second arm” for a group whose $25m corporate centre will act as the flagship property for a series of other office complexes it plans to construct throughout The Bahamas.

He revealed that Leno also wants to incorporate “digital assets” into its offerings, and intends to “roll this out in the next couple of weeks” as part of a “whole new product suite” targeted at Bahamian investor clients.

Confirming that Leno is still seeking to extend its reach beyond The Bahamas’ borders, Mr Longley said Latin America represents “a huge market” that the group will target with the “full package” of financial services including trusts, investment funds and International Business Companies (IBCs).

With the novel coronavirus proving no deterrent to Leno’s plans, he confirmed that it still planned to target the Asian financial services by the 2020 fourth quarter opening of a Shanghai office headed by a Bahamian fluent in Mandarin.

The Leno chief executive admitted that establishing a foothold in that region would be “a stretch”, given that The Bahamas is relatively unknown to both its high net worth clients and their advisers, but voiced optimism that the group’s efforts would start to bar fruit after two years.

Speaking at the groundbreaking for Leno’s new headquarters complex, located at the top of Collins Avenue on Third Terrace, Mr Longley said the group had to set high growth targets if it was to fulfill his goal to become “the premier financial services company in The Bahamas”.

While it faces significant competition for that title from the likes of RoyalFidelity, CFAL and Providence Advisors, he added that he drew strength from Leno’s rapid expansion into all areas of domestic financial services - bar banking - in the decade since its founding.

“We’ve grown by leaps and bounds. It’s been tremendous for us,” Mr Longley told Tribune Business. “When we started ten years ago, we started with zero dollars under management and just three employees. We’ve ballooned into a fully-fledged financial services group, and the only thing we’re not doing is banking...

“When we first started we just wanted to do pension administration, but when we saw opportunities we took advantage of them and it just mushroomed from there. We’re not stopping.”

Leno’s acquisitions last year of Bank of The Bahamas’ $103m trust portfolio, and Family Guardian’s pensions and capital markets business, has enabled the group to rapidly achieve greater scale to the extent it now boasts $800m in client assets under management.

“Our goal is to get to $1bn by the end of next year,” Mr Longley added. “We believe that is do-able and achievable because of us moving into international markets where we’re looking at fund management and that sort of thing. We’re also wanting to grow assets under management in the trust business.

“We’re doing the strategic planning in the office now, because we’ve incorporated the Bank of The Bahamas and Family Guardian businesses, and are trying to come up with a new mission. We want to get to the $1bn mark. Once we get there, the goal is to get to $3bn within three years - by 2024.

“It’s ambitious,” Mr Longley conceded, “but you have to set targets. You have to set goals. Once you set those goals you will be in good shape. If you don’t achieve those goals, what happens? You shift. I want us to be the premier financial services company in the country.

“My colleagues have all bought into that mission, and are going to work to achieve that goal. When I say I think we have the right players in place, it’s paramount to keep them and move the business forward. That’s why we want to be the premier financial services player in the country.”

He attributed the group’s growth to-date “to being customer centric” and providing clients with service that exceeded their expectations. His previous career in accounting and pension administration had also provided a lot of contacts and introductions that have produced business .

The Leno chief added that the group’s new five-storey headquarters complex, of which its 20 employees will occupy just the top floor, stands to give it “a real footprint” and strengthen the message that it is a “real player” in Bahamian financial services.

He suggested that it is the first of many similar projects that may be undertaken through its real estate development unit, Leno Realty Holdings, which is headed by his nephew, Hartman Longley Jnr, a licensed real estate broker and Bahamas Real Estate Association (BREA) director.

“We’ll be looking for projects and building more office complexes,” Sean Longley told Tribune Business. “We see that as an opportunity for growth. It’s going to be a very significant part, a second arm.”

He said Leno had already identified potential property purchases as part of these plans, but declined to identify them “until we close” the deals. Confirming that Leno’s real estate ambitions will initially focus on the capital, Sean Longley added: “I think we’ll look at New Providence in the first instance, but where opportunity presents itself we’ll look at it and take advantage. We’re not going to be myopic and say we will be Nassau-centric.”

The hiring of Brian Jones, a highly-regarded Bahamian executive previously with UBS (Bahamas) and Deltec Bank & Trust, to oversee Leno’s international and domestic investment funds business was also likely to bring rewards in the Fin-tech (financial technology) space, he revealed.

“We’re going to be looking at the digital assets and seeing how we can incorporate that to provide diversification in the Bahamian market,” Sean Longley said. “Brian’s working on that, and will roll that out in the next couple of weeks. We’re looking at a whole new product suite. I know Brian has quite a few things in mind.”

Mr Jones will also play a central role in Leno’s international growth. “Diversification is key. We don’t want to be myopic and say we are only focused here,” the Leno chief executive told Tribune Business. “There’s tons of money out there, and people are looking for different structures.

“Latin America is a huge market. We went over for the STEP (Society of Trust and Estate Practitioners) conference, and met a lot of intermediaries that want to do business in The Bahamas. That’s huge for us.

“The guys in Latin America first want an IBC, then they want a fund structure, and then they want a trust structure to wrap it up and protect it. We’re able to provide the full package of services - companies, funds and trusts. We can do it all. It’s a no brainer.”

Sean Longley said Leno will have to be more patient with its Asian plans, with the proposed head for its Shanghai office still in The Bahamas familiarising herself with the group and its operations.

“By the second half of the year we will look at our need for office space so we can hit the ground running in the fourth quarter,” he told Tribune Business. “The whole idea is that we’re going to mirror what we have here in Shanghai. That’s an untapped market for The Bahamas.

Leno is the fund manager for the two Titan investment funds that were launched, and are sponsored, by Sebas Bastian’s investment house, Investar Securities. It is also acting as the financial advisor to the Bahamas Petroleum Company (BPC) sponsored BPC Investment Fund, and is presently helping it to raise the targeted £2m.

Did they have a permit to tear down the hill and build that there?

The entire public done see it going on about a month but seems noone iin the Bahamas National Trust BNT PROTECTORS by laws of the environments.or similar concerned groups cant recall that despite them saying that this half a hill missing had nothing to say either aye or nay part of Collins Hill get chap down. Mind you these Environmentalust did been talking about Cruise ships pollution either from Ship confessing or third parties telling about it.

Is dis like the ghetto brothers an sisters knowing to jus tell the Police passive acceptance."Officer erryting dead good round here" knowing its jus a waste of time getting your life all kerpunkle ups.

The Bahamas National Trust is there to accept "donations" for approval to do business, and take what they want, from The Bahamas. They are a rubber stamp organization. With all the available science in the world, why haven't they stated the obvious in countering this drilling for oil scheme in The Bahamas? Someone in the Trust must read, right? No ambiguity in the scientific literature. But there is in BNT's office. Now ask yourself why.

Sean Longley and Hartman Longley, Jr. are hitched to the hip of the corrupt numbers boss, Sebas Bastian, and his various criminal enterprises. Nothing more need be said about them.

Would've been smart to build up even higher?
With a PopulacessOrdinary of 300,000 comrades - stacked into the colony's capital out island of Nassau Town which provides 124 miles of relatively flat and low-lying land - so be good bet to hold onto be's fleeing up hills towards the couple higher points during time fleeing from rushing high seas flooding, Yeah, no -why does such otherwise smart business comrades - make such unwise judgement calls? Perhaps we need an urgent Act parliament to protect we Hilltops - from such future unwisely thinking developers?