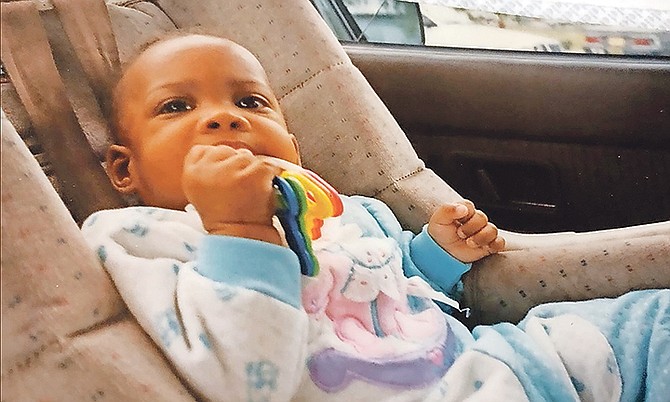 Leeia with her adopted mother, Janet Hutcheson, at graduation.

Adoption is a topic that is not often talked about in the Bahamas. Yet there are hundreds of children in the country who have either been left orphaned after the deaths of their parents or were given up by their biological parents. For many of them, one of the country’s several children’s homes is the only home they will ever know.

This was not the case for Leeia Hutcheson. She was given up at birth and placed in a local children’s home, but she had the good fortune to be adopted by veteran educator Janet Hutcheson, who welcomed Leeia into her family with open arms and lots of love.

“I had a very beautiful life growing up. My childhood was awesome,” said the now 27-year-old junior high school teacher.

“I am grateful that God connected me with my (adopted) mom. There are some great qualities of my mom that I really love. My mom is a very unproblematic human being and that is very peaceful. I try to mirror that as well. Some of my friends, a lot of them do not have that peace. They would always say when they came by house that my house felt peaceful, and that was one of the things that I appreciate about her and my family.”

Leeia said she always felt very loved and well taken care of by her family as a child. It was only as she grew older that she became more of aware of it meant to be adopted, which caused feelings of abandonment to surface.

“That would have been in my pre-teen and teenage years. When my grandmother (Janet Hutcheson’s mother) died, that changed my life for the worse. She died in 2004 and I remember afterwards the whole family having a huge disconnect. We became distant from each other and the family wasn’t coming around much.

“During the disconnect there were feelings that began to emerge. I felt like, ‘Why would you even pick me up if I was going to feel like I am lonely?’ I thought to myself, maybe if my biological mother had kept me then maybe I wouldn’t feel so lonely. I thought if I had a biological sister she would check for me instead of these people who don’t appreciate me.”

This feeling of being alone in the world affected Leeia in a major way, and her grandmother, who had always offered positive reinforcements, assuring her she was loved and accepted, was no longer around to soothe her fears.

In her experience, Leeia said, those who have been adopted need frequent reassurance that they are wanted and cherished.

“The saddest thing is a lot of people do not understand those kinds of feelings. The first thing people say is, ‘Well, I am tired of my own family’, but that is not the same thing for me. There is nothing that can compare to knowing where you belong; and knowing your backstory. I love history, I love backstories, and it kind of always felt like a part of me was empty because I did not know where I came from,” she said.

“I felt like there was big hole, something missing, watching my friends with their families. I listen to their stories and you can draw a connection and see why they are the way they are because you see who their mother or father is.”

Not knowing who her biological parents or potential siblings are has been one of the most difficult things in life for Leeia to accept. While she is grateful for the family she has, she regrets that the question as to where she came from will probably never be answered.

“My mother had mentioned about hiring a private investigator to search for (my biological mother), but she had the wrong name. And they could not find who she was. I thought about doing my own research online...putting something out where the internet can help me just to search her out.”

“I see how people look at their children, and to know that the person who (gave birth to me), pushed me out, does not want to have a relationship with me, that would completely devastate me.”

In the Bahamas, there are is a specific procedure in place that can facilitate the reconciliation of adoptees and their biological family members.

The director, Ms Fernander said, will in turn have an inquiry made into their history, if it is known to the department. If it is, the director will review the records and decide on a case-by-case basis if the information should be released to the applicant, how much information should be released, et cetera. Consideration will be given to whether or not the natural parents gave consent for the information to be released; if it is known who the natural parents are (some children may have been abandoned) and whether the applicant would need to have access to their medical history.

Although provisions do exist for reconciliation and information is granted in certain cases, Leeia believes this is not enough. She believes adoptees have the right to know who their biological parents are.

“It’s very important for us to know who our family is. I always thought, what if I meet someone and had a romantic interest in them and do not know whether this person is a sibling or cousin. My identity is tied do this,” she said.

Leeia said she may never find out who her biological parents are, but at least for now, with her lonely adolescence behind her, she is content with her lot in life and has received all the reassurance she needs from her adopted family.

When it comes to having her own children, Leeia said she will follow her mother’s example and also adopt. Her advice to those seeking to adopt is to ensure they love the child or children, and that they love equally.

“If you are adopting and you have children, please do your best to ensure you are are not treating them any different, because a hint of that will make the adopted child feel inadequate,” she said.

“One of the main things you would have to to have is patience. You have to be understanding. Even with me, my mom had to constantly reassure me; probably a little bit more than my big sister who was also adopted. She had to pour that into me.

“So keep the lines of communication open. Allow the child to feel comfortable to communicate,” she said.

"...“It’s very important for us to know who our family is. I always thought, what if I meet someone and had a romantic interest in them and do not know whether this person is a sibling or cousin. My identity is tied do this,” she said...."

Everyone in the Bahamas is everyone else's cousin. The reality is, there ought to be a license required to have children. You need a license to open a lemonade stand - but not to create a life and mistreat it. The church is very concerned with the lives of the unborn ... until they are born.