Smith And Gibson Sue For Damages: Cleared Of Corruption, Now They Hit Back For ‘Malicious Prosecution’ 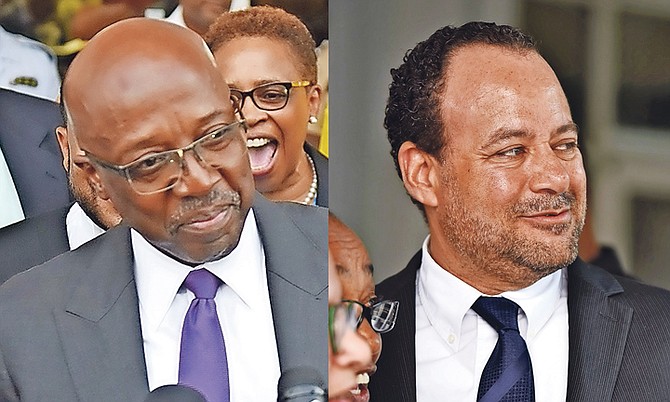 SHANE Gibson and Frank Smith have sued the government for malicious prosecution and are seeking aggravated and exemplary damages stemming from the bribery charges they were acquitted of last year.

Mr Smith, the former Public Hospitals Authority chairman who was acquitted last February, has filed a writ in the Supreme Court even as he awaits a Privy Council hearing following the Crown’s appeal of his acquittal.

Mr Gibson was acquitted in November 2019. He is seeking damages for being “falsely” imprisoned on August 2 and 3 of 2017.

The damages are for “malicious prosecution arising out of multiple charges of extortion, bribery and misconduct in public office laid maliciously and without reasonable or probable cause.”

In a letter to the chairman of the Police Service Commission as well as Dr Minnis, Mr Gibson called for action against Commissioner Ferguson and ASP Thompson, highlighting the controversies arising from his trial, including revelation that ASP Thompson met with key witnesses to synchronise their testimonies.

“I was recently acquitted of 15 counts of bribery contrary to the Prevention of Bribery Act,” Mr Gibson wrote in letter dated February 7, 2020.

“I write to formally commence the respective disciplinary proceedings against the commissioner of police and Assistant Superintendent Debra Thompson pursuant to Articles 120 and 121 of the Constitution of the Bahamas and section 50 of the Police Act, 2009. Please formally acknowledge receipt of this letter and indicate whether and what steps you intend to take following my complaint as other proceedings may be required to compel your lawful actions as a result of the contents hereof.”

Articles 120 and 121 of the constitution concern removing or disciplining senior police officers.

ASP Thompson admitted during the trial that she made “minor changes” to the statements of Johnathan Ash, who accused Mr Gibson of accepting bribes, and Deborah Bastian, a public servant who worked with Mr Gibson. ASP Thompson said it was common police practice, but in hindsight the meeting between the two witnesses was wrong. Mr Gibson’s attorneys have harped on this meeting as a key injustice in the case.

In a letter to the Bar Association, Mr Gibson cited the rules of the association’s code of ethics and asked for disciplinary action to be taken against Mr Gaskin, in relation to the changes ASP Thompson made to the witness statements, and Ms Bastian’s lawyer.

Mr Gibson wrote that if not for Deborah Bastian’s recording of the meeting, neither he nor his attorneys would have known “of the (alleged) abuse of process”.

Mr Gibson was acquitted of charges of soliciting and accepting thousands from Mr Ash to expedite payments the contractor was owed by the government. The defendants in his writ are the attorney general, the commissioner of police, the director of public prosecutions, ASP Thompson and Mr Ash.

Mr Smith, meanwhile, was acquitted of charges of abusing his position as PHA chairman to demand and receive bribes from Barbara Hanna over the award of a 2016 cleaning contract. The Court of Appeal has declined the Crown’s motion to overturn his acquittal or order a retrial. The defendants in his writ are the attorney general, Health Minister Dr Duane Sands and National Security Minister Marvin Dames.