'From bridesmaid to bride' on March 2 Lucayan close 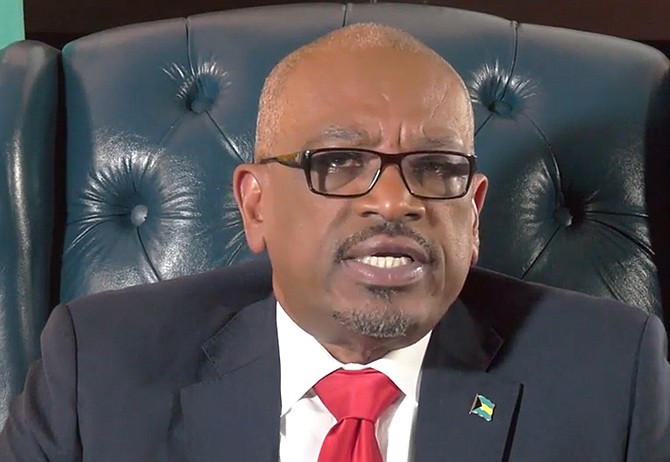 The prime minister's announcement of a March 2 closing date for the Grand Lucayan sale was last night hailed as "a game changer to transform Freeport from the bridesmaid into the bride".

The prime minister, in last night's national address, said the Heads of Agreement for the Grand Lucayan's sale will be signed in two-and-a-half weeks' time on March 2. "This project could mean approximately two to 3,000 jobs for Grand Bahama," Dr Minnis said.

"It will result in scores of jobs during reconstruction and development, and long-term employment, business and entrepreneurial opportunities for the residents of Grand Bahama."

Noting the uncertainty that has surrounded the Grand Lucayan negotiations, and the long wait for the deal to close, Mr Sarles said ITM/Royal Caribbean's plans needed to take effect "quickly, on time and as planned" and be accompanied by an airport rebuilt to "world class" standards.

He revealed that Grand Bahama real estate prices, already "in the doldrums", had slumped by a further 30-40 percent in some areas following Dorian. Together with Carnival's $200m cruise port project, Mr Sarles said ITM/Royal Caribbean's Holistica joint venture was vital to boosting the island's "exposure", attracting millions of new visitors, and creating the critical mass and economic activity that will stimulate his and other industries.

"It'll be a game changer for us, especially with what has happened in the aftermath of Dorian. There's no doubt about that on paper," he told Tribune Business of the Grand Lucayan's imminent closing. "We've just been waiting and waiting and waiting for this deal to come to fruition.

"We've always been the diamond in the rough, the bridesmaid and never the bride. We've never had the exposure. It's always seemed like we've taken two steps forward and three steps back. I'm optimistic that this is our chance again.

"Royal Caribbean is a big player," Mr Sarles continued. "It's a time where we can all look and say: 'Let's hope this is a game changer so that Freeport can go from the bridesmaid to the bride'. We have the potential and everything going for us in terms of US proximity, beautiful beaches, low crime and so much land to be developed.

"We need other things to happen, like the Carnival cruise port. We've had the perfect storm, and now need the perfect recovery. It's a chance for us to reap the benefits and for Freeport to achieve its potential. We have long way to go because of the hurricane, and a lot of people need help."

Carnival provided a further boost for Freeport's long-struggling economy by yesterday revealing that it is doubling its investment in its cruise port facility to $200m, with construction set to start this summer subject to government approvals (see news for further details).

Mr Sarles, meanwhile, questioned whether Royal Caribbean plans to use Freeport as a "home port". This would potentially see hundreds of thousands of passengers fly into the city, and stay at the Grand Lucayan, before embarking on their cruises.

The cruise line and its ITM partner have given no indication that this is in their plans, though, which so far are focused mainly on transforming the Grand Lucayan and nearby Freeport Harbour into a water-based them park destination.

However, Mr Sarles echoed other Freeport businessmen and residents in urging the Government to rapidly follow through with plans to take over Grand Bahama International Airport's ownership and redevelopment from Hutchison Port Holdings and the Grand Bahama Port Authority (GBPA).

He added: "It would be very exciting for us if, in conjunction with this, the Government takes the airport away from the current owners; the people who are not doing anything. If they redevelop this airport as a world-class destination and attract millions of new visitors, they will be exposing Grand Bahama to the world and that will doubtless affect real estate prices.

"Prices are flat and in horrible shape because of the hurricane. It's a good time to buy for people buying right this second. As as soon as you make that announcement it creates some optimism and will doubtless affect prices as it makes those properties more desirable to sell.

"We need jobs, we need bodies. It all translates into trickle down, into tourists and visitors, life and new businesses. We cannot live without a major hotel here."

The Government acquired the Grand Lucayan from Hutchison Whampoa for $65m in September 2018, amid fears that the Hong Kong-based conglomerate would close the property - long seen as Freeport's 'anchor' resort - in a bid to stem operating losses running as high as $1.5m per month.

Hutchison Whampoa had also failed to reinvest the Hurricane Matthew insurance proceeds into repairing the resort, resulting in two of its three properties being shuttered. The Government eventually signed a Letter of Intent (LoI) with ITM/Royal Caribbean for the hotel's sale, and wider redevelopment, in March 2019 - meaning negotiations to close the deal will have taken almost one year.

The Holistica joint venture is to pay the same $65m purchase price that the Government gave to Hutchison, subject to normal due diligence and closing procedures. The Minnis administration has come under fire from its political opponents over the cost and financial risk that the Grand Lucayan deal has created for Bahamian taxpayers, with a further $16.1m outlay to be regularised in today's House of Assembly debate.

The constant subsidies required to cover the Grand Lucayan's operating losses will have likely taken the Government's exposure towards the $100m mark, but it will hope that the sale - combined with taxes generated on the back-end from economic activity under ITM/Royal Caribbean's ownership - will more than offset this.

The Government's own Fiscal Strategy Report, though, warned in November that a redeveloped Grand Lucayan and Freeport Harbour will not emerge overnight. Construction work will take around two years, meaning that the project's operational phase should probably launch in early 2022 - potentially just in time for when the next general election is called.

"The first phase of the project will feature a $195m initial investment, inclusive of the $65m resort purchase price, and will span over a 24-month period, providing 2,000 jobs," the Fiscal Strategy Report said.

"The project is poised to act as an economic stimulus to Grand Bahama, bringing approximately two million passengers annually to make use of the associated facilities, which will include a five-star hotel property, water-based family entertainment, as well as dining, gaming and other entertainment options.

"The additional cruise passengers will also present an opportunity for local vendors, taxi drivers, arts and crafts artisans and other souvenir businesses to benefit from increased sales."

I will only believe this when it happens not before. Been lied to way too many times....

The corrupt Minnis-led FNM government has invested over $150 million in the Grand Lucayan property and will now be lucky to net $65 million from its sale to the ITM/Royal Caribbean joint venture, with likely negative future annual cash flows for our public treasury due to the outrageous concessions granted in an effort to get a deal done at any cost.

Ah yes...!!! The seemingly clear custom here is the DOWRY where the bride who is not suitable an unattractive just oogly .....an has to have the Bahamian taxpayers come up with a very very large Dowry to offer to get the bride married off. And yes I see the problem here in that the father and family of the bride should use their own money and not the taxpayers money. Just seems the bride's family spent huge sums to workers at the buffet table, overpaid staff wages due, paid enhancements of stamp duty ...just paid too much away to get bride married.

What's the difference between calling people corrupt or thugs? Seems like you want to have your cake and eat it too.

Mr: James Sarles as you are well aware a portion of Grand Bahama is swamp land of flood land the University of the Bahamas is seeking a new site and many have decided not to go back over the bridge.

One man who spent two days on his roof during the hurricane said the water started under the floor first.

were these issues addressed

Comrade Realty Principal 's Suck up James, should transform into the prime minister's Bride - and two newly weds can engage in the consummation their vows by checking into the bridal suite at The Grand Lucayan Hotel? Can't write this, just, can't.

.....An all dese years them same people residents...paying same licence fees, fees...homes... being paid to do business..... to same people ....Port Authority...who have them in dire straits..handicapped airport....handicapping dere lives children elderly infirm an businesses and ability for prosperity.

Good news, yeah it took long, yeah they was fumbling, yeah he doesnt often communicate well with the public but he came with good news and dates. If the deal aint signed march 2 and carnival dont start construction in summer we are gonna deservedly have him for dinner, but my god, this is good news.