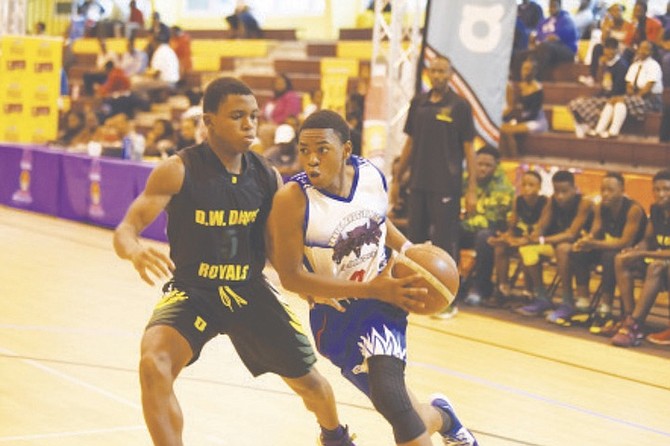 IN THE PAINT: The DW Davis Royals junior boys routed the Anatol Rodgers Timberwolves 64-32 to snatch a 1-0 lead, while the TA Thompson Scorpions stunned the HO Nash Lions 35-34 in the girls’ encounter. Photo: Shawn Hanna/Tribune Staff

The CI Gibson Rattlers showed why they have the two top ranked teams in the Government Secondary Schools Sports Association as they rallied from behind to take a 1-0 lead in their best-of-three basketball championship series at the Loyola Hall on Gladstone Road last night.

The Rattlers’ senior boys rallied from a 10-point deficit in the first half to sneak past the Doris Johnson Mystic Marlins 66-63 in a battle of two former champions, heading in game two on Friday.

The Lady Rattlers also won 35-28 over the Anatol Rodgers Timberwolves in the senior girls’ division.

In the two junior games, the DW Davis Royals routed the Timberwolves 64-32 to snatch a 1-0 lead in the boys’ division, while the TA Thompson Scorpions stunned the HO Nash Lions 35-34 in the girls’ encounter.

Emmaniel Alexandre scored a game high 23 points and Jaden Strachan added 13 to pace CI Gibson to a 1-0 lead in their series.

The game, which turned out to be a real competitive one, got a little scary with about two minutes left and the score tied at 59-59 as Mystic Marlins’ Malek Pierre suffered an injury as he collided with Rattlers’ Chad Smith, who was ejected from the game with his fifth foul.

Doris Johnson led 34-26 at the half, but they couldn’t hold off CI Gibson as they surged back in the second half.

The Timberwolves, behind seven from Laverne Armbrister, emerged 12-8 at the end of the first quarter. But as Sands connected on seven points for the Rattlers, they rallied back to cut the deficit to one (16-15) at the half. The third quarter was a different story as Sands, Carson and Brice all contributed four as CI Gibson went on a 12-2 tear to take control of the game (27-18) at the end of the third.

In the fourth quarter, the Rattlers held off every challenge that the Timberwolves threw at them and they even went deep in the bench as they eventually held on to preserve the win. “Defensively, we have to be much better in our rotation,” said Johnson, who was quite content with their offensive attack. “At the end of the day, we have to be more fluent. At the end of the game, we made too many turnovers. We have to do a better job in the next game,” Johnson added.

For Anatol Rodgers, Laverne Armbrister tried to carry her team on her shoulders, scoring 15, including six in the fourth quarter as they stayed in the game. Ashante Strachan had four.

DW Davis raced out to a 13-6 lead at the end of the first quarter and extended their margin to 26-18 at the half thanks to Philip Dawkins’ six points and Frank Wallace’s five in the second quarter.

By the end of the third, DW Davis had increased their margin to 42-25.

In control of the game in the fourth, coach Mark Hanna cleared his bench as they came in and closed the door on what turned out to be a disappointing showing for Anatol. “We came out a little scared and the intensity wasn’t there,” said Timberwolves’ coach Spurgeon Johnson. “DW Davis, with their experience, took advantage. I think playing under the lights and before the huge crowd got to us.

“But we should be better prepared for the next game. I see some things that I could change, especially how we rebound the ball and make less turnovers. If we can improve on those areas, we will have a better showing in game two.”

Wallace finished with a game high 19 points and Dawkins had 15. Stefon Johnson helped out with 10, Steven Joseph had five and Orson Rolle four.

In a losing effort, Michael Finlay led the Timberwolves with 10, Elijah Roker and Derrick Edgecombe both had eight and Aiden Sturrup four.

In the final one minute and 34 seconds, TA Thompson pulled away from a 32-32 tie as Adena Webster took control with a lay-up. But after she got a steal, she was blocked heading to the basket. HO Nash’s Geraniqua Bethel got a basket to tie the score again at 34-34.

But with 7.7 left, Webster got the clutch two free throws to push the Timberwolves ahead again as they held on for the win.

Webster exploded for a game high 22 points, including 10 as she helped TA Thompson to a 12-8 lead at the end of the first quarter. Dominiqua Rolle chipped in with 10.

For the Lions, Sherell Stewart scored 14 and both Trinity Cartwright and Geraniqua Bethel added six apiece. “I was satisfied with our performance today,” said TA Thompson coach Donnavette Scavella.

“We didn’t execute our defence the way we should. We left a lot of lay-ups out there as well, but I was satisfied with the win.”

Scavella said they will have to go back to the drawing board and work on their defence and convert on their free throws.

Coach Patricia ‘Pattie’ Johnson admits that the HO Nash squad has some work to do. “Their guards came out scoring and ours didn’t,” Johnson said.