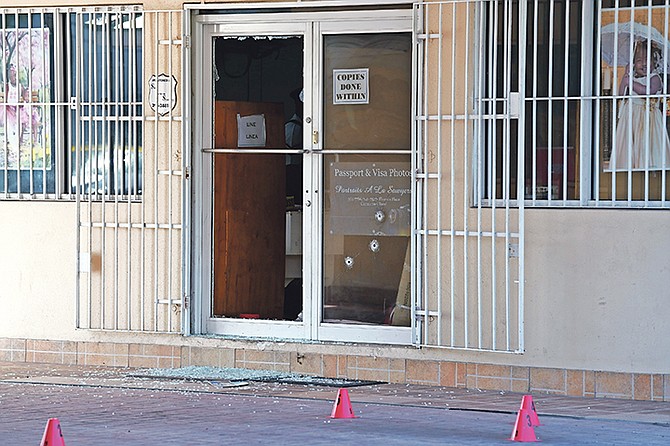 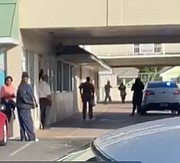 POLICE shot a suspected armed robber at a Carmichael Road plaza yesterday morning, moments after he and another man held two people up in a photo studio.

A portion of the brazen incident was captured on cell phone video and shared on social media. One video shows an officer running towards the FML Plaza and past bystanders with his weapon drawn. Several armed police are seen at the door of the business, as bystanders loiter about, before several shots are heard.

Police said before 8.15am, two men entered Portraits-a-La Sawyers photo studio dressed in white jumpsuits and claiming to be window cleaners. They held up the proprietor and a worker and duct taped both of them.

When officers arrived at the scene, the suspected thieves attempted to shoot at the officers and flee the scene, prompting police to open fire. A police officer was also injured during a struggle with one of the suspects.

At the scene, Chief Superintendent Solomon Cash said officers observed two individuals, one with a firearm, inside the photo studio.

“Once the officers got to the front section of the building, these persons then engaged the officers with an attempt to fire on them with a view of escaping and the officers, being concerned for their life, opened fire on both suspects subsequently hitting one of them. As a result, the officers, once on the inside there was a struggle between one of the suspects and one of the officers.”

The injured officer got medical assistance while the wounded suspect was taken to the hospital. Both suspects were found with a large sum of money which the police assumed was taken from the business.

CSP Cash noted that the store owner did not appear to be harmed but was “traumatised”. The proprietor’s daughter, Chandra Sawyer, told The Tribune that her father and the employee were doing okay but “shaken up” after what had happened.

“Well he said him and the employee was in the store and she was going to step out to get something and when she came back in the guys came in and they just came in and they pulled out their weapon and told them to get on the floor.”

A car cleaner, who wanted to remain anonymous, was at the plaza when the robbers suspiciously entered the building.

He said: “When I was setting up this morning, I saw them coming out the bush in the back there. They politely made their way towards the shop and the lady she just was opening up the shop…when she open up the shop they like pushed her in and the door end up closing behind her.

“A lady was standing right there, she look at me and when she look at me she end up turning round, and know what she see, she must be see they hold a gun to her. When she saw that, she jump in her car and gone head down by the police station and she bring the police back. The police was like but a one minute or two behind her.”

Ms Sawyer said while the photo studio had experienced a break-in before, yesterday was the first time an incident like this had happened.

“There’s been a break-in before but you know never like this where persons would come in armed to rob while the establishment is open.

“It’s kinda of a shock that they would be that brazen first thing in the morning to come into the store to rob at that time of the day. So, it’s just saddening. I pray that we just do something about this in this country you know but that persons don’t have to go through these experiences.”

“It’s really unfortunate because he’s a hard worker and you know we really have to do something in this country because people have to work too hard for this to happen first thing in the morning – this is a desperate act.”

Thank God no one other than the robbers was physically harmed.

Robbers, seriously? Who robs at 8:15 am . It's called traffic guys.

Excellent work Police...!!! Looks at left side of door there seems Security Alarm Protection sign on wall behind iron bars. Seems why prices are at these levels to cover cost of Security alarm and strong iron protection store door. Seems arcross the island have to spend hundreds of millions of dollars on Security devices just trying to operate business.Just more difficult to do business.

This little shop had "large sums of money"? At 8:15AM? Was the injured officer also taken to hospital? Who shot the door, police or suspects? If they were by the door, were they already fleeing or trying to come out?

I think I just might have this one - figured out?
The holdup bandits comrade thugs - either are experienced surveillance skills - or begs the question - if they could've had advance intelligence their being a strong potential Thousands Dollars being kept at Passport Visa Photo Store does smells strong possession prior knowledge?

Must explain where the store got all that money.that seems fishy also.

Something is fishy---doesn't smell right!!

Not sure I believe this is legit---doesn't smell right!