OPPOSITION leader Philip “Brave” Davis has called for the removal of Water and Sewerage Company executive chairman Adrian Gibson – calling Mr Gibson a child and saying he is not mature enough to fill the role.

Mr Davis made the comments at the WSC headquarters where he stood in solidarity with members of the Bahamas Utilities Services and Allied Workers Union (BUSAWU) on Friday and spoke to union members currently on strike at the corporation.

“The plight of the workers at the Water & Sewerage Corporation has been concerning to me particularly since the change of government and the appointment of a child to run a corporation of 400 persons,” he told reporters.

“And his conduct – since becoming chairman – is far short of what is expected of a mature person who appreciates corporate governance and appreciates the running of an operation.”

Mr Davis said the “horror stories” that have come from employees working at the corporation are “sickening” to hear.

“You get a situation where you have all of the workers unanimously suggesting to the Prime Minister – and for quite some time – that the time has come for that child to be moved from that post.

Insisting Mr Minnis should “intervene and hear the cries” of the workers, he added: “Very simply, they earned their overtime pay and the chairman has refused to pay them.

“What is that all about? If Water & Sewerage are saying ‘Well look we don’t have the resources now to pay you,’ then sit with the union and say ‘Look, yes we know we owe the workers, but the resources are strained and we’re not able to pay you now, but here’s a resolution for that problem.’

“But you don’t even have that opportunity to sit and discuss the issue with anyone (so) the Prime Minister needs to step in, get rid of this child and put someone there who knows what they’re going to do.” 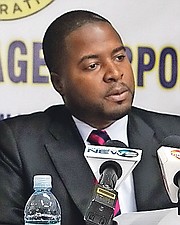 Mr Davis added that while the law does allow the Minister of Labour to refer trade disputes to the Industrial Tribunal, that power should be “exercised judiciously".

He also said he believed the Minister of Labour should “penalise” the corporation’s executive team and chairman for failing to “speak and sit with the union".

“You cannot get a resolution if you’re not sitting to the table to talk about it. Then you use this draconian power to prevent them from exercising the only civil right they have to bring to fore their issues by arbitrarily just transferring or referring it to the Tribunal.

“That in itself is an abuse. When the Minister of Labour cannot get his colleague – that child – to sit and talk with the union to resolve the issues, it says something.”

Asked whether he believed the government was attempting to censor the union through referring the matter to the Industrial Tribunal, he added: “Well obviously they want the strike to end because once they refer it to the Tribunal, they ought to be going back to work.

“But I gather from the union that they have taken the matter to court and it’s being now judicially reviewed and they are defiant to that issue because at the end of the day, workers only pressure point in trying to resolve their issues and it’s a strike so that’s what they have.”

Mr Davis insisted that “pulling the rug from under” workers would only cause the “dispute to fester” and create more “discord between management and workers.”

“It is the workers from which you measure how your economy is doing,” he said. “If the workers are demoralised (and) if there are no workers you have no economy.”

Thanking Mr Davis for his support, BUSAWU president Dwayne Woods also said the union hopes the government would consider their “words of wisdom".

Asked if workers were still confident about the strike, he added: “We intend to be here in full force with the managers when they get their matters resolved until our numero uno concern is addressed with seven out of our 37 items of concern addressed.

“We could do the other 30 over time, but the seventh and the eighth items must be addressed before the members decide they will go back to work. It is simple as that.”

Montgomery Miller, who says he has been elected president of the Water and Sewerage Management Union (WSMU), added that the unions should not be “outside getting the public’s attention” when their grievances could be “civilly addressed sitting around the table.”

Mr Miller’s claims of being the elected WSMU president has caused some confusion, as Ednel Rolle maintains he is president of the union despite Mr Miller showing what he claimed to be a valid certificate of the election of officers showing that he won the position unopposed on November 22, 2019.

“The Water & Sewerage Management Union has an offer that has been issued ironically by… Brave Davis,” said Mr Miller.

“From 2013-2018 we’ve been waiting. The time has expired. The only thing that is needed is for him to put his signature on the line.”

Meanwhile, Mr Woods also criticised the number of police and defence force officers present at their recent demonstrations, stating that authorities were being “exploited for no reason at the cost of the taxpayers".

“We want to say to the Prime Minister there’s no need for that because we don’t commit treason and we consider sabotaging the infrastructure as treason,” he said.

“We are honest workers, simply concerned of achieving what we have worked for so we look forward to him taking this matter in hand and taking this young bull out of the china shop from breaking up his crystals who is the chief asset of the Water & Sewerage Corporation – the workers.”

Davis needs to keep quiet! He jumps on any wagon just to run on with BULLSHIT.

A hat tip leader Queen's official opposition for finding a vexing - thinks he's the all and mighty - red shirt MP that even a contingent Imperialists red shirts MP's - could rally around motion from floor the House by the opposition - calling his shoving out from elected seat for constituency Long Island. Cant write this. Just, can't that even the PMO has stopped accepting the sewage chairman's telephone calls.

Gibson been kicking around water and sewer for years. Given that all those problems still exist is reason enough for his firing.
This is a corrupt organization that needs a total house cleaning.

Audit wid Davis and Davis brother with contracts at Water and Sewage.

Gibson has been been makings changes for the people with Union leader getting paid some $60,000 and not going to work. Gibson brought up to public what the public facing sabotage eaters supply affected, waste water overflowing atea Arawak Cay etc, documented security cameras videos, photographs documented in press all threateming languages to people documented in press etcetcetc.

Surprisingly these Union people are not in jail and Davis as Political leader of the people seems to want these atrocious practices by Union to continue......just seems not about the people...seens its about family and friends....as usual...!!!!!!!

Comrades, be weary if you post anything considered to disparage a former comrade columnist for this newspaper in a specific way so as to offend the sensitivity Tribune's Editor. Just this very morning, I had posted a far from even giving off the appearance libelous reminder to the Editor that two the names Toogie and Bobo highlighted in Tribune's Editorial: Nygard Lawsuit Shows Our Failings As A Nation - may have been the same two names that were once before associated with not PLP politicians but with then opposition politicians of not so Imperialists standing at the time of red shirts colours. My post was deleted in mere minutes - and all future posts that blog page are now blocked to all bloggers posts? How the now mighty governing Imperialists red shirts are entitled to get a pass by the media on past bad behaviour?

Adrian Gibson has been the ONLY Executive Chairman in the history of WSC to have the BOLDNESS and BALLS to stand up to the institutionalized plant underproduction, overcosting, and employee non-productivity and corruption that has plagued every SOE since SLOP days ……… We need at least another TEN Adrian Gibsons to clean up the others ……. Bahamasair, BPL, BAIC, BMC, NFS, etc.

You know not of what you speak. Who do you think made the English “Talbert” fittings a requirement for all service connections?

I’ll give you a hind, he is also the only licensed distribution to the Bahamas.

Another hint, he makes a small fortune from it, from each and every “approved contractor “

Carful who you call out as honest

I have to agree with Davis. Adrian Gibson has tremendous potential. However he was sent out in the deep end before he gathered any experience and he has a tendency to exercise power rather than influence to get what he wants. Its a mistake alot of accidental leaders make. If what the employees are asking for is unreasonable then demonstrate that. The petty employee transfers, putting 2 men in chains and wasting court time for one fire hydrant, firing Laville who wrote the strategic plan then taking credit for it...it's almost like he's become a tyrant dictator at WSC