Men's National Basketball Team 'One Of The Best' Assembled 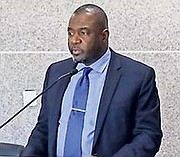 WHEN the Bahamas Basketball Federation heads to Mexico this weekend to play in the first leg of the home-and-away series in the FIBA Americup 2021 Qualifiers, president Mario Bowleg feels they will have one of the best all-around teams ever assembled.

Bowleg is so confident the squad will play very well in Mexico on Thursday, February 20, that he feels that the public will want to come out and watch the home game at 8pm on Sunday, February 23, in the ballroom at Atlantis resort.

Named to the team that will leave on Saturday for Mexico are the following:

The head coach for the team is Norris Bain from Grand Bahama, but he won’t be making the trip to Mexico. He will only be available to coach the team when they return home to play at Atlantis.

The rest of the coaching staff going to Mexico are Steve Barnes, Perry Thompson Jr and Moses Johnson. The team will be managed by Rodney ‘Kripy’ Wilson and Elvardo Kemp. Eugena Patton will be the team’s therapist and John Marc Nutt will provide media coverage.

Johnson said that after a few players had suffered some injuries that prevented them from making the trip, they were still able to secure the services of some of the top players, including locally based D’Shon Taylor and Michael Bain Jr from the Commonwealth Bank Giants.

Bain Jr., who joined Taylor in expressing their gratitude to the federation and the corporate Bahamas for their support of the team, said they have assembled one of their better teams in the team selection.

“We leave on Saturday and we will try to get the synergy together in the few days that we have to practice,” he proclaimed. “We want to assure the Bahamian public that we hope to represent the country very well.”

Bowleg, who will serve as the head of the delegation, said looking at the team, there are not many weaknesses because the addition of Taylor will provide the extra firepower as he can play either the shooting guard or the small forward position.

He said there are no differences in the backcourt with players like Bridgewater, Cornish, Carey Jr and Bain Jr. He noted that their frontcourt will be just as versatile with players like Nesbitt, Burrows and Cleare.

The team will commence practice on Monday and will work out twice a day until they get set to play on Thursday. He said that should be sufficient time for the coaching staff to get the team ready.

They are also expected to play in two scrimmage games against locally based teams in Mexico to iron out the knits before they take on the Mexican national team.

Once they complete the home and away series against Mexico, Bowleg said the federation will host Puerto Rico and the United States in two home games in November and he’s hoping that by then the Kendal Isaacs Gymnasium will be available.

Bowleg thanked Baha Mar for coming on board as a major sponsor for the federation and making it possible for them to travel to participate in the first leg of the qualifying process for the 2024 Olympic Games.

He also thanked the Bahamas Government for providing the federation the opportunity to host the home game against Mexico when they return on February 25 in the ballroom of the Atlantis Resort.

Robert ‘Sandy’ Sands, Senior Vice President for Government & Community Relations for Baha Mar, said this is a good opportunity for their resort to help in the promotion of Bahamians on the international scene.

“We hope that the team comes back victorious in this particular match in Mexico and certainly, we are hoping that they are victorious when they host Mexico on the 23rd,” he said. “Once again, we are proud to be a sponsor of the Bahamas Basketball Federation and we wish them every success.”

Bahamas Olympic Committee president Rommel Knowles, who jokingly admitted that he is available to provide a jump shot if needed, congratulated the federation on the team selection and he assured them that they will do very well.

“I want to congratulate FIBA America for allowing small countries like the Bahamas to compete in the Olympic qualifier,” he said. “In the past, the Bahamas ended up pooling against teams like Canada and the United States in the first round.

“These series of games, gives small islands like the Bahamas, the opportunity to qualify for the Olympic Games. I think you have to be commended on the team that you have assembled and I’m sure that you will do very well.”

And Tim Munnings, the Director of Sports at the Ministry of Youth, Sports and Culture, said while the Kendal Isaacs is not available to host the Mexico game, they have made provisions for the game to be played in Atlantis.

“We believe that the execuees will soon be relocated. Once they do, the NSA (National Sports Authority) is ready to jump on it right away and get the Kendal Isaacs Gymnasium ready for the next competition.”

Mullings, however, said they are confident in the ability of the team and if they continue to gell, there are others who are prepared to join the team. He wished Bowleg and the federation every success against Mexico.

Johnson revealed that tickets priced for the home game against Mexico on February 25 will be priced at $20 per person. The box office will be opened from Tuesday at Atlantis and persons can also purchase tickets at Sunshine Auto on Abundant Life Road.