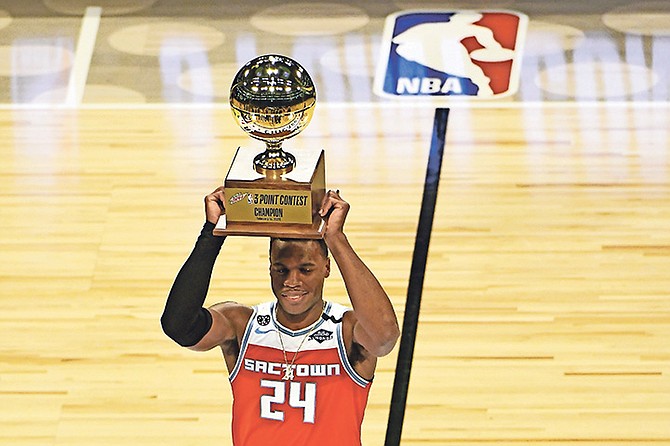 Buddy Hield needed a nearly perfect final round to become the NBA’s new three-point champion and the Grand Bahama native did just that to highlight his appearance at the league’s All-Star Weekend.

The Sacramento Kings guard posted a final round of 27 points, and clinched the title on his final shot to defeat the Phoenix Suns’ Devin Booker in the final round of the Mtn Dew Three Point Shootout at State Farm All-Star Saturday night at the United Center in Chicago, Illinois.

“I just wanted to come out and represent the Bahamas as best as I can, represent my family and I thank God for giving me the win. I was happy to be here and I was happy to show out. Everyone knows I have been a shooter since I was a little kid. This one was on my bucket list and I’m happy to get it.”

In the final round, David Bertans of the Washington Wizards posted 22 points and Booker posted 26. Hield was the final shooter in the group. He missed three of his first five shots on his opening rack. He made all five shots on the second rack, followed with four makes on his third rack, three makes on his fourth rack and concluded with four of five makes on the final rack, including the go ahead score on his final shot as time expired. 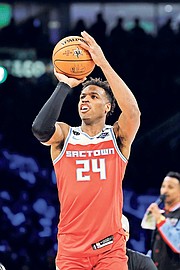 The Grand Bahamian native dedicated the win to the victims of Hurricane Dorian and his Bahamian support system.

“Hurricane Dorian, people in the Bahamas and people that lost their homes, people that lost lives, I dedicated it to them because, like I say, I represent my country to the fullest,” Hield said. “When I say that, I really mean it because, without my upbringing, I’m nothing,” Hield said in the post event media availability.

“I do it for the people back home. I do it for me and my family. Thank God I have the ability to do that. People back home, they enjoy this more than I do. Being from the Bahamas and getting to represent them, it means the world to them.

“I do it on the highest level that I can and be the role model for the kids down there to show them, if I can do it … anything is possible.”

The 2020 version of the contest featured a new look with the addition of two shots in the “MTN DEW Zone” – two locations positioned equidistant between the traditional racks at the top of the 3-point arc and the adjacent “wing” rack.

Each of the two ball pedestals in the MTN DEW Zone were located six feet behind the three-point line and held one special green ball, the “Three Ball” worth three points.

With the addition of the MTN DEW Zone, the number of balls per round increased to 27 from 25, and the amount of time in a round has expanded to 70 seconds from the traditional 60 seconds.

The maximum possible score in a round rose to 40 points from 34 points.

In round one, both Booker and Hield posted scores of 27 to lead the field while Bertans also advanced to the final with 26. Defending 2019 MTN Dew Three-Point Contest champion Joe Harris of the Brooklyn Nets was eliminated with just 22 points, Atlanta’s Trae Young scored 15, Charlotte’s Devonte Graham scored 18, Miami’s Duncan Robinson scored 19 and Chicago’s Zach Lavine scored 23.

At last year’s All-Star Weekend in Charlotte, North Carolina, Hield fell short in his bid to win the title in his debut.

“I’m blessed,” Hield said. “I did some homework and I was able to be more relaxed and focused on knocking down shots. I was able to talk to myself and motivate myself to shoot through the racks so that was fun.”

Through 54 games this season, Hield is averaging 20.4 points per game and is shooting 39 per cent from beyond the arc, making 3.8 field goals in about 10 attempts per game.

One of the league’s sharpshooters throughout his career, Hield has made at least seven threes in five games this season, highlighted by a Kings record 11 threes in a 41-point effort against the Boston Celtics on November 25 and nine makes in a January 27 game against the Minnesota Timberwolves when he scored 42.

“The way I shoot the ball I’m always confident no matter what,” Hield said. “I step on the court I feel like I’m the best shooter on the court regardless of how I’m shooting the ball or what anyone is saying. My confidence is always high and nothing is going to bring me down.”