Face To Face: What Happened Next To Sweet Emily, The Queen Of Junkanoo 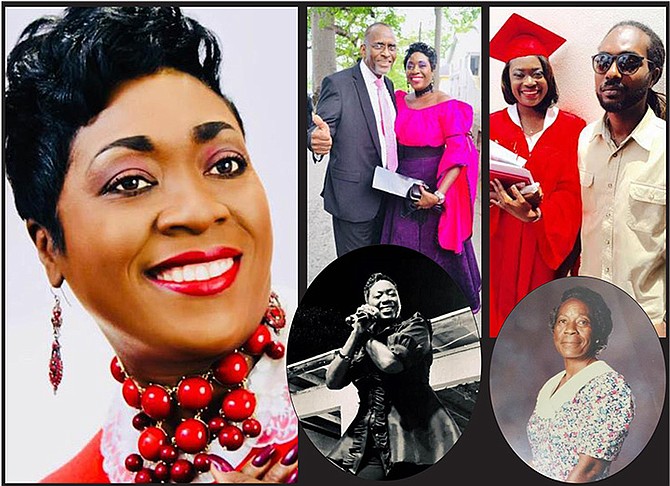 She was the biggest female name in Bahamian music. Her songs are still played, sung and loved to this day. Songs like Bring Back the Good ‘Ole Days, Send Him Home and Look Wha’ Ya Do, a duet with Ronnie Butler, hold a special place in the hearts of Bahamians. Her captivating voice, signature smile and enthusiasm for Bahamian music and culture led to her recognition as the Queen of Junkanoo. But all of a sudden, the entertainer we knew and loved as “Sweet Emily” dropped from the secular music scene. She became “Evangelist Emily”. She stopped her popular stage performances and she recorded no more cultural hits.

That was 16 years ago. Emily married a pastor and she and her husband founded a ministry: Church Without Borders. Her husband, Pastor Wendell Williams, also took a leap of faith when they got married and he went on to form his own church. They were each being led in a different path from the one which they had devoted so much time to.

For Emily, she had spent some 18 years as an entertainer, performing at venues throughout The Bahamas and the world. Pastor Wendell was the comptroller of City Market Food Stores for over 25 years. He already had a Masters degree in Business Administration and was doing well. But he felt a call on his life, resigned from his job and went to school in Canada. He attended Regent College in Vancouver, gaining a Masters in Divinity. Together, the Williams birthed Church Without Borders with the goal of going beyond the four walls of the church to share the Gospel. They appealed to people from all walks of life who were attracted to their style of teaching, feeling accepted for who they are as they sought after God’s word.

During this time, Evangelist Emily never stopped singing. She produced a single as well as an album. Her gospel songs are in rotation on faith-based radio programmes today. She is a dutiful wife and church leader. The church has been through ups and downs, but has stood the test of time and is still growing today. But there was something missing.

“I had totally left the secular scene and was doing ministry, but there was always this void,” she said. “I felt I could be doing more. I continued to pray about it. I said, ‘God, surely it has to be more than this. Lord, I don’t know what you want me to do but you have got to show me’. God normally speaks to me, but this night I had a dream. I got up on this stage to speak, and someone said, ‘It’s time for you to speak, Evangelist Emily’. I was waiting to go on at the time. I was sitting at the back of the stage, so I couldn’t see the people. When they called me I stood up and headed to the stage and I said, ‘Wow, I didn’t know all these people were out here’. It was a huge crowd. I was getting ready to preach. I was about to start with ‘Let us pray’. But when I opened my mouth, I started singing. I don’t know where the song came from. I said, ‘How is this possible’? I don’t know where the song came from, yet all these people were singing along with me.”

When Emily woke up, the song was still on her tongue. She wrote it down. She called Ira Storr, veteran Bahamian entertainer and told him about the dream, adding that God told her to call him. At the time, he was working on a track called the Backyard Riddim that various Bahamian artists were singing on. Emily produced her song “It’s Not an Easy Road” on that track. It speaks of God’s unfailing love through the trials of life. It was Emily’s first non-traditional Gospel song. Nehemiah Heild also produced a Gospel song on the track. But that was just the beginning. Emily made the decision to make her big comeback as the Queen of Junkanoo, and she kept the name “Sweet Emily” because she feels there’s nothing ungodly about being sweet. She decided that her fans need her, and that she has so much more to give. This past weekend, Sweet Emily dropped her latest track It’s Good to Be Back. The song is produced by Fred Ferguson, whom she describes as a perfectionist who pushed her as they produced her first comeback hit.

The song lets her fans know how much she misses them, and she says: “I realise here is where I need to be. I’m glad you waited. Let’s try again… I am happy with you, I am grateful and thankful. Let’s start all over, let’s try again.”

This is a huge step for Emily. It’s one that came through fervent prayer. When she awoke from that dream, she went into her living room and started praying. There, a conversation with God left her feeling confident about her next big step.

“God told me to notice that I thought I was going to preach but that he brought me there to sing,” Emily shared.

“I never called you to have a four-walls mindset, God told me. ‘I always called you to go into the darkness so you can be the light. The position you are in is unique. No one in The Bahamas has ever transitioned like this before. Some people will not understand. Some will criticise you. They will say you are not saved. They will say you backslide. But I have called you to be an evangelist. Remember, when Christ walked this Earth, yes he went to the synagogue to preach, but he always went where the sinners were. You can’t be effective just being among church people. They do not respect you. Your audience is the people that I sent you to, and I always told you I would send you back.”

These words resonated to the very core of Emily’s soul. She said throughout the years, God often told her He would clean her up and send her back, but she never knew what it meant. She said she thought the Lord had called her to sing just gospel music and she was ok with it. She recalls going through the different motions and changes in the church. She came to a place here she felt her well of passion was drying up. She felt that many Christians were not appreciating her for what she brought to the table. She said she got a lot of backlash when transitioning from secular music to the gospel scene. There were people who would look at her as not being truly saved, considering the world she came from. Then, she felt never fit into the circle of pastors’ wives.

“I saw the church from an internal position… I saw the hypocrisy in the church” says Emily. “When they need you to sing, they don’t want to pay you. You are supposed to sing for free because you are saved. Financially, it was affecting me. I couldn’t pay my bills the way I used to. I am not saying that God doesn’t provide, but the church situation was not a fulfilling one.”

Emily and her husband are used to criticism. They feel compelled to teach the Gospel in a form they call “marketplace ministry”, allowing them to reach people beyond the borders of the church. Church Without Borders always made bold moves, such as when it became a Saturday church instead of a Sunday church. But the Williamses felt they were making decisions according to their assignment. The couple faced trials as their flock would grow and fall off. They had put a significant amount of money into maintaining a high rent. Today, they stream live on Facebook every Saturday. They had received a word of prophecy more than once, that the Lord would take them down a different route. Emily feels it’s all making sense now. Pastor Wendell fully supports his wife’s decision. She also feels the love and support from her son, D’Aundre and daughter Aysia, as well as her three grandchildren.

“This is not an easy place to be in,” Emily confesses, “Being in the church and coming back to secular music. “There are people on Facebook trying to criticise me - some people I respected, people I call friends… some I had to block. God called me - I know that. I love to be where sinners are because they are the people who need God. He told me that the doors that I need to walk through to reach certain people, I can’t do it in the church. You have to be in certain places to reach certain people. I have come full circle to believe that even though I am a Christian, I am called to do more – marketplace ministry.”

Emily first released her song Good to Be Back on Natural Empress’ radio show Free Ya Mind on Star 106.5fm this past Friday, because it was Empress who encouraged her to follow her heart no matter what people thought. This weekend, the music video was released on YouTube. This week, she is making the rounds on all of the radio stations. She also authored a book: The Transformation of Sweet Emily.

Find her on social media by the name: sweetemilywilliams. Reach out to her at evangelistemi@msn.com.