Coach ‘Kj’ And Rattlers Off To Orlando For Tip-Off Classic 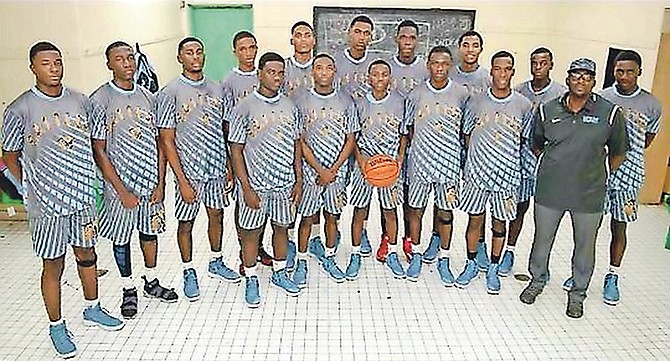 WITH a greater emphasis on exposing his players to the potential basketball scholarships, coach Kevin ‘KJ’ Johnson has decided to skip the prestigious Hugh Campbell Basketball Classic and will be going to Orlando, Florida, to participate in the Tip-off Classic (Super Regional) instead.

Johnson and his Rattlers were scheduled to play their first game in the Hugh Campbell Basketball Classic, organised by the AF Adderley Junior High School, yesterday against the Anatol Rodgers Timberwolves.

But that game was never played as the Rattlers are preparing to leave town on Thursday.

“I had coaches on my back because they wanted to see some of my players, so I just decided to take them to the Tip-off Classic this year,” Johnson said. “The objective is to give our players the exposure because there will be a lot of college coaches at the tournament.

“I want to get my players to be seen and showcased because we have a few players who are eligible for college, both athletically and academically. We want to do whatever we can to try and help them to get sorted out with any college offers that they can get. Next year, I have a bunch of guys who have the potential to sign also.”

Johnson, whose Rattlers fell short of winning the Government Secondary Schools Sports Association senior boys title after they lost out to the Doris Johnson Mystic Marlins last week at Loyola Hall, said their decision had nothing to do with the GSSSA or the organisers of Hugh Campbell, but it was purely to get the exposure for his players.

Since the inception of the tournament, CI Gibson has been the most dominant school in New Providence and Johnson has collected five titles as a head coach.

In their departure this year, he said he wishes every team that participates a successful tournament, which is also expected to be played this week without Grand Bahama’s Tabernacle Baptist Falcons, who have also indicated that they will not be participating this year. “I pray that it goes well and whoever is the champion this year is a true champion,” Johnson said.

“I hope that all of the teams play to the best of their abilities and may the best team win. You have Doris Johnson, the defending champions, who should make a good run for it. There are some other schools like Anatol Rodgers, CR Walker and Queen’s College.

“And then there’s a number of schools coming out of Grand Bahama like Sunland, St George’s and Sir Jack Hayward, so I think it will still be a great tournament. I think it will boil down to who wants it the most, so we will see what happens. I think there’s a lot of teams that have the potential to win it this year.”

Having last won the title in 2017, Johnson said he expects that his Rattlers will be back in the tournament next year.

It all depends on how well things go for them when they participate in the Tip-off Classic this weekend in Orlando.

The Rattlers will return on Monday as they complete their mid-term break and get ready to report to CI Gibson on Tuesday.