Fiba Qualifier: Bahamas Will Have 10 Players Against Mexico 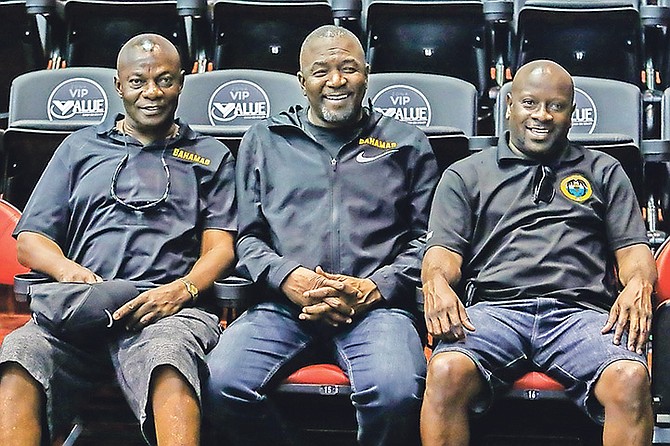 THE men’s national basketball team will only have 10 players available for their FIBA AmeriCup 2021 qualifier against Mexico on Thursday night.

THE men’s national basketball team will only have the service of 10 players for their FIBA AmeriCup 2021 qualifier against Mexico on Thursday night.

But according to Bahamas Basketball Federation president Mario Bowleg, who also serves as the head of delegation, the team should be okay.

He indicated that the two players will be available when the team returns home to play Mexico in their home game on Sunday in the Atlantis resort’s ballroom.

“Everything is going quite well,” Bowleg said. “We’ve had about three practices since we’ve been here and we had a scrimmage game against one of the professional teams here and we fared pretty well against them, winning by double figures.

“We have a lot of things to iron out before we play on Thursday, but we used that scrimmage to see where we are and what we need to work on before Thursday.

“We have 10 players here who will be playing. We don’t have Tavario Miller and Shaq (Shaquille Cleare) here due to the late release from their teams in Europe.”

Grand Bahamian Norris Bain also didn’t make the trip, but is expected to coach the team when they return home to play Mexico on Sunday. Instead, Steve Barnes, Perry Thompson Jr and Moses Johnson, along with Bowleg, are handling the chores.

The team will be managed by Rodney ‘Kripy’ Wilson and Elvardo Kemp. Eugene Patton will be the team’s therapist and John Marc Nutt will provide media coverage.

“We’re not that big, but we will use our quickness,” Bowleg said. “We have some guys averaging 6-6 and 6-7, so we feel we will be able to defend the ball and play as well as we can against Mexico as we play our style of basketball.”

Having had a chance to watch the Mexican team work out as they both practice in the same gym, Bowleg said he’s not too concern about whether or not the Bahamas can play against them.

“We hope to force the ball up the court with our uptempo play and try to control the boards,” Bowleg said. “We believe if we can play well against them with players like Keno Burrows and Michael Thompson Jr, Travis Munnings and Willis Mackey, all stand around 6-6, 6-7 and Burrows 6-9, I think if we can control the boards are chances would be great.

“We have a lot of shooters, so offensively, I think we will do very well. We just have to limit our turnovers.”

Bowleg said everybody is in high spirits, working out together and just waiting on Thursday to play their skills.

“It was a good thing or us to come here a few days early to relax and enjoy ourselves after a hard day’s practice,” he lamented. “I think this has put our players in a good frame of mind for game time on Thursday.”

Hopefully the team will be successful as they prepare to host Mexico on Sunday at 8 pm at Atlantis.