1,400 Have Signed Up For Repairs Plan, Says Clarke 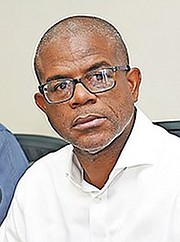 DISASTER Reconstruction Authority chairman John Michael Clarke announced that, as of Tuesday, more than 1,400 people have signed up to the Small Homes Repairs Programme.

The chairman gave the update yesterday while explaining the authority's role and plans in the post-Hurricane Dorian restoration process at the Rotary Club of West Nassau. Some vouchers have already been given out under the programme, which was launched last week.

The Rotary Club has pledged assistance with the authority's technical assistance unit in Grand Bahama, to make certain people are registered. Once people are approved for assistance, they must secure quotes for the repair work before the DRA doles out purchase orders in the relevant amount.

As far as work on Abaco was concerned, Mr Clarke noted power in the Marsh Harbour area should be back by April. Debris collection and removal were still ongoing on the decimated island and "very good progress" had been made in clearing public areas. At this point, the authority, he said, was assisting private residents and private commercial businesses with clearing their land. The main challenge, however, is providing accommodation.

"There is a critical need for multi-family and rooms in the Marsh Harbour area," he said. "What has happened is people want to go back and a lot of them have destroyed properties and then workers need to get in the area in order to attend the reconstruction work.

"That being said we are in active discussion with the Department of Housing and they have provided for use in the Central Pines area ….. I think that's 51 multi-family properties and we're coming up with the strategy to develop an RFP where we hope to be inviting developers to participate and provide duplexes, triplexes and quads that could be used for rentals and rooms so that have a place to say when they get back into Marsh Harbour."

During his presentation, he said a 'buddy system' for islands was being considered in an event if one island goes down a crew from another one can come in and help. This comes after government officials on the ground in Abaco were affected during the deadly Category 5 Hurricane Dorian. Administrators had no place to live and public offices could not function.

The chairman explained: "We were relying on administrators and government staff from the agency to assist in manning the response to Hurricane Dorian and I think for the first time in this country's history. The persons we were relying on to manage the impact, they were so severely impacted that management became critically difficult. When I mean critically difficult, almost to the point for all intents and purposes we almost lost government function in Abaco for a while."

Mr Clarke added plans are being finalised with the United Nations Development Programme (UNDP) on the framework of utilising pledges from the UNDP conference last month.

"Out of the recent pledge conference with UNDP there's an account that has been established…..There's a certain framework because that trust fund that we've established with UNDP is a joint trust fund. They have some guidelines on how that fund should be administered, so we're working with them to finalise the administrative framework for that fund," the chairman said.