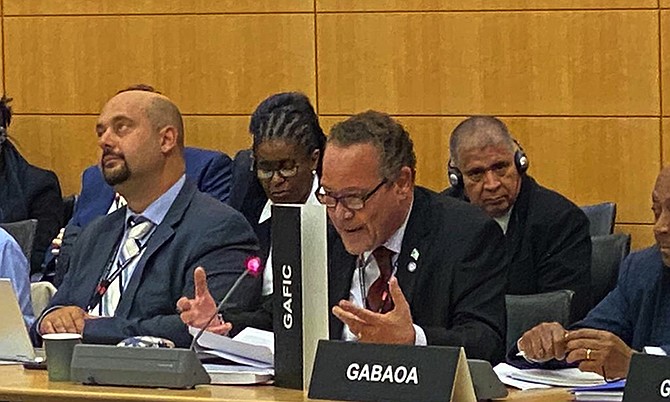 The Bahamas is targeting a June “exit” from a list of 18 nations with “strategic deficiencies” in their anti-financial crime defenses, the attorney general said yesterday, hailing “a new day” in regulation.

Carl Bethel QC, speaking after the Financial Action Task Force (FATF) found this nation had made sufficient progress to “warrant an on-site” examination to ensure its reforms have been implemented and will be sustained, told Tribune Business that The Bahamas was “moving at a fast pace” to ensure it escaped the body’s continued surveillance.

Arguing that The Bahamas had made much faster progress than other listed jurisdictions, having only been on the FATF list for 18 months compared to the three-plus years of some countries, Mr Bethel said the “on-site” visit to this nation was currently scheduled “some time before mid-May” 2020.

He voiced optimism that, if all goes well, the visit should set the stage for The Bahamas to escape the list created by the FATF’s International Co-operation Review Group (ICRG) at the June meeting of the organisation that sets global standards for combating money laundering, terror financing and other forms of financial crime.

Mr Bethel said the Government’s attention, as well as that of financial services regulators and industry partners, will now turn to ensuring everything necessary is in place to produce a positive assessment by the visiting FATF team.

He highlighted progress on “the investigation and identification of the proceeds of tax offences” as a particular issue meriting attention, but told Tribune Business yesterday this did not meant enforcing foreign countries’ tax laws in The Bahamas.

Instead, Mr Bethel explained this would focus on the laundering of tax evasion proceeds and any false statements/declarations submitted to the Ministry of Finance by the foreign owners of Bahamas-domiciled corporate vehicles as part of their compliance with the US FATCA, the Common Reporting Standard (CRS) and other automatic tax information exchange obligations.

And he reiterated that “the old days” of regulators and government agencies turning a blind eye to certain activities “are over” given the ever-increasing surveillance and demands for co-operation and transparency by international watchdogs.

Mr Bethel’s remarks were also echoed by K Peter Turnquest, deputy prime minister, who told Tribune Business that escaping the FATF list - which places this country alongside war-ravaged states such as Syria and Yemen, and collapsed economies like Zimbabwe - was vital “to restore the good name of The Bahamas”.

He also voiced hope that removal from the FATF listing would see The Bahamas escape the advisories issued by the US and UK Treasury Departments, both of which cited the body’s action for warning their financial systems to apply increased scrutiny from transactions originating in or involving this nation.

“We are in the exit process,” Mr Bethel told Tribune Business following the outcome of the FATF meeting last week. “That is more than just a step in the right direction. You don’t get into the exit process unless you’ve substantially completed all the requirements.

“Some countries have been on this list for three years; we’ve only been on it for 18 months. We are moving at a very fast pace, and are in the exit process. You don’t get into the exit process until you’ve completed all, or mostly all, of the requirements.

“That is a very important signal, and provided all goes well in the on-site visit, we will in June look forward to receiving full ICRG clearance and removal from their ‘grey list’.”

Mr Bethel said he already has dates for the FATF’s “on-site” visit to The Bahamas, but these have yet to be finalised. “It’s going to take place some time before mid-May,” he added. “The aim is to have the on-site before the June plenary, and our target is to be off by the June plenary as we’ve identified before. That’s our goal.”

The FATF, in its statement after last week’s meeting, said The Bahamas had “substantially completed” the action plan agreed in October 2018 to remedy the deficiencies identified in its anti-money laundering and counter terror financing (AML/CFT) regime.

As a result, this nation “warrants an on-site assessment to verify that the implementation of The Bahamas’ AML/CFT reforms has begun and is being sustained, and that the necessary political commitment remains in place to sustain implementation in the future”.

The reforms encompassed seven key areas, and included developing a comprehensive electronic case management system for international cooperation; showing risk-based supervision of non-bank financial institutions; “access to adequate, accurate and current basic and beneficial ownership information”; improving the quality of the Financial Intelligence Unit’s (FIU) products to assist law enforcement agencies in money laundering and terror financing investigations, especially complex and stand-alone cases; showing that all types of money laundering are being investigated and prosecuted; and showing that confiscation proceedings are initiated and concluded for all types of money laundering cases.

Mr Bethel, in a statement following the FATF announcement, called on all agencies, regulators and financial sector players to “redouble” their compliance and prudent management efforts, and ensure they adhere to the new laws and standards.

“It is critically important that The Bahamas showed measurable and sustained progress in addressing the deficiencies in our anti-money laundering and counter-terrorism financing regime, as well as in our combating all identified risk offenses,” he added.

“Of particular importance will be the investigation and identification of the proceeds of tax offenses with a view towards the enabling of prosecutorial intervention in the event of any potentially false reporting under the CRS or the Substance Requirement Act.”

Mr Bethel, yesterday explaining the reference to tax offenses, told Tribune Business: “We cannot enforce another country’s tax laws in our own country as they are not part of our laws. We cannot enforce German, French, Italian or Spanish law, so we have to capture these illegal funds being laundered or if false statements are being made to the Bahamian tax authorities.

“All these entities with non-resident beneficial owners must make CRS filings with the Ministry of Finance and economic substance filings.” Mr Bethel said the Attorney General’s Office had made arrangements with the Ministry of Finance, on a regulator-to-regulator information sharing basis, for the latter to forward any evidence of false tax compliance and related declarations to it so they could be investigated by the police.

With focus now switching to preparing for the FATF’s visit, Mr Bethel added: “A large part of the preparation will be going over and reminding regulators of the extent of their authority, and limitations thereof. In all things they must follow the law consistent with what the statute permits, and what the limitations are. We’re looking in a sense to remind people of their new-found duties and penalties.

“There’s a new legislative architecture governing financial services enforcement specifically, and regulatory powers to ensure compliance, and these powers and regulations must be implemented where circumstances require. It’s a new day. The old days of anything that mash up goes and nobody does or says anything, those days are over.”

It's abundantly clear the corrupt Minnis-led FNM government is now only looking after the interests of foreigners and the international organizations that represent the interests of other countries, while having abandoned attending to the real interests of the Bahamian people. We should not have sent Carl Bethel to Paris on our dime to frolic with the elitist thinking global bureaucrats at the FATF.

How about targeting an exit from controlling influences of countries far more corrupt than we are or could ever hope to be?