Alicia Wallace: It’S Only $100 But Its Significance Means So Much 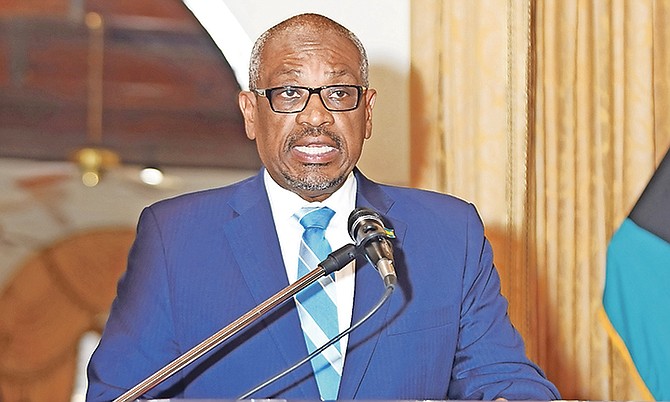 The recent kerfuffle about $100 is almost laughable. To begin with, the outrage is not over just $100. It is about the total amount of money the current government administration has decided should be available for travel expenses. It is also the principle of the matter – that allowances are being made for spouses to travel, which is wholly unnecessary, at the expense of the public which is still adjusting to a high increase in Value Added Tax, has a high rate of unemployment and is struggling to recover from Hurricane Dorian. The maximum assistance available for post-Dorian rebuilding is $10,000, but spouses can receive $100 per day - the same amount as technical officers - for travel? There is good reason to be outraged.

The Free National Movement has attempted to brand itself as fiscally responsible which, in many cases, seems to be taken to mean fiscally conservative. There have been a few occasions when this administration chose to spend wildly. One of the first to come to mind is the purchase of the Grand Lucayan resort. Another, on a different scale, is the increase in the travel budget. Not only is this new per diem for spouses cause for concern, but the 67 percent increase in the per diem for international travel provided to ministers. Coming after its criticism of the Progressive Liberal Party-led administration (which was also reckless in spending) for its travel budget, this is probably surprising to many. There has been no rationale offered for these increases. At the mere question, the public is treated like insolent children, scolded for daring to ask and denied a response.

We will certainly remember this administration for its terrible engagement with the public through the media. It has refused to provide information, ridiculed reporters, completely disrespected the Bahamian people – its employers. Microphones have been pushed away, ministers have abdicated responsibility and the prime minister has failed to meet his own commitment to regularly address the Bahamian people. This unabashed disrespect is no salve for the sting of budget increases that benefit individuals in the administration and amount to a reduction in resources for the people. It is as though this administration is content to take food from us, eat it and refuse to even look at us when we are hungry. To them, are we not even worth acknowledgement?

Making matters worse, Dr Minnis’ flippant response to the question over the $100 per diem suggested it is not a lot of money. He is on the growing list of people who have no understanding of poverty, or even the struggles of the average Bahamian. Just months ago, $20-30 increases in already high electricity bills was said to be of no consequence. Let’s think about $20 or $100 in terms of tanks of gas, cans of tuna, five-gallon bottles of water, bus rides, blood pressure medication, occupational therapy sessions, tarps, baby formula or school lunches. Is it really so little? Does it really make no difference? Maybe to a person with $1 million, $100 is nothing, but for people down to their last $10, it is all the difference in the world.

Maybe if the people making decisions about public funds actually thought about the people affected – like, for example, those displaced by Hurricane Dorian – the consequence would be clear, but perhaps there is no amount of money that would make them actually care.

For as long as the money comes from our pockets and so long as our representatives are paid by us and speak in our names, we ought to care and we ought to compel them to care. We need not wait for election day to do it. We have just as much power now as we will have in 2022. It is up to us to acknowledge and activate it.

In a shocking contribution to the mid-year budget debate, Dr Minnis said we need to “take our country back.” He was speaking, of course, about immigration. He spoke of the aggressive pursuit of illegal migrants, obviously referring specifically to Haitians. He said Bahamians are second-class citizens in The Bahamas. This is more than an exaggeration. Interestingly, his examples pointed more to the inefficiency of government services and even the reluctance of Bahamian people to access those services. He also pointed to issues that proliferate due to the incompetence of government ministries and departments.

Perhaps more attention on policies and the people responsible for upholding them and less on the vulnerable people seeking refuge and opportunity here would yield the results he, and many like him, want.

In his speech, Dr Minnis repeatedly used the term “illegals.” It is important that we, as human beings, realise migrant people are human beings. They may not have entered the country legally, but they do not then become less than human. People are not illegal. People can do illegal things. Migrants are not illegal. They can enter countries illegally. “Illegals” is an offensive word that reduces people to their status. It is possible to recognise a person’s status without characterising them by that status.

There is enough stigma around migrants and migration without us branding people “illegal” and we certainly do not need the prime minister’s assistance in making people illogically fearful and hateful not only of migration, but of Haitian migrants in particular.

Timely production as we struggle to recover from Dorian

It is a haunting story. It is not often thought of, much less told. It would probably not be a conversation today if not for the performances of Ian Chinaka Strachan’s Diary of Souls at The Dundas. Directed by Nicolette Bethel and Renee Caesar, on the evocative set designed by Jason Evans, the play is both a display of undeniable Bahamian talent and an unabashed look at an ugly truth that lives in The Bahamas. It does this against the backdrop of the 1990 interception of a Haitian sloop by the defence force which ended in the death of at least 39 Haitians and the contradictions that followed. It is a timely production, as we continue to reel from the impact of Hurricane Dorian, struggle to return to normalcy and creep toward recovery.

The three main characters are lost. They are stuck. They have been deserted. No, worse – they have been dumped. They have varying degrees of understanding of what happened to them and what could be next. One of the most disturbing parts of the play is when the three Haitian characters play a game, acting out the memories of the Bahamian people they understand to hate them. It is embarrassing, enraging, heartbreaking and not at all unfamiliar. It is a true representation of the way we think about, speak of and treat Haitian people. It is a mirror.

In a scene I cannot get out of my head, one character asks: “Why do they hate us? Weren’t their people slaves too?”

The question is one some of us have been asking for years. We are not so different. We suffered through the same tragedy and were deposited on different rocks to live through more tragedy. We have the same desires. We come up against the same systemic obstacles. Still, we separate ourselves from them, understanding ourselves to be more deserving and more human.

The answer came from another character. “We are ugly.” At first, I could not tell whether she had said “we” or “they,” but knew that she was right, either way. “We are ugly” would mean that we, as Bahamians, see Haitians as subhuman, less than us, and too closely resembling our ancestors. “They are ugly” would mean that we, as Bahamians, barely deserve to be considered human ourselves, because we have little regard for human life that is not our own, and our insides are rotten with hatred, greed and, in many cases, indifference. We have to reckon with the ugliness. Whether it is ours or theirs, it is of our own making.

There are three more performances of Diary of Souls this weekend. Go to The Dundas box office on Mackey Street or purchase tickets online. Learn about an event in our history that is never discussed. Open yourself up enough to feel something other than superiority. Move away from indifference. Allow yourself to be moved by the humanity of others, even as it is portrayed by characters who no longer have their own. Consider what is presented by a talented cast and production team in today’s context, in a country that is post-Dorian, but certainly not post-disaster. Remember that part of the disaster is the difference we create between ourselves and the people we could easily have been.