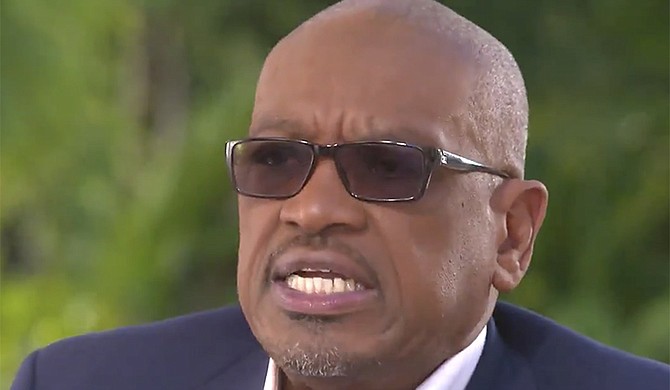 DESPITE criticism that it has taken too long to get plans off the ground to convert Ragged Island into a sustainable “green” community following Hurricane Irma’s devastation, Prime Minister Dr Hubert Minnis maintains the goal still “absolutely” remains, with plans to expand the effort.

The prime minister will outline how his administration intends to execute this plan during the next edition of 60 Minutes, airing Sunday, March 1, at 7pm on CBS.

A teaser for the American show was released this week.

In the promo, Dr Minnis tells 60 Minutes: “After Ragged Island was devastated I made a statement: Let us show the world what can be done. We may be small but we can set an example to the world.”

Asked by 60 Minutes journalist Bill Whitaker if it was his goal to make the island green, Dr Minnis replied: “Absolutely, absolutely. After which we can expand it. We can expand it.”

Unlike others of its kind, this design is very low on the ground and is rated to withstand 180mph winds, an official said.

Last May, the prime minister outlined plans for an $8 million investment in rebuilding key public infrastructure on the island.

He also said candidates had been shortlisted to participate in a request for proposals process for a solar generation facility on the island, with the RFP expected to be published and the facility completed by year’s end.

In September 2017, Dr Minnis promised to transform Ragged Island into the “first fully green island in the region”.

That month he said in the House of Assembly: “Out of the devastation and the destruction, a new Ragged Island will emerge, including stronger building codes, improved zoning, and strategies to mitigate against climate change and rising sea levels.”

However, as months passed, little transformation took place and critics deemed his promise hollow. Dr Minnis also said a school and teacher’s duplex will be constructed on the island at a cost of $2m, a new clinic at $2.5m an administrator’s office, post office and court room at $2.5m and a police station and accommodations for officers for $1m.

The U.S. government and most Americans who have already visited the Bahamas or can point to our country on a global map already know Minnis for who and what he is. I have no intention of watching him on the 60 Minutes telecast - he's much too embarrassing!

While the design of solar equipment is low on the ground and can withstand 180 mph winds there are many other variables which the experts should know which also have disastrous affects on structures.

So how many banks of batteries will they have to use on Ragged to keep power on? And how long will they last? And what do they cost to replace?

Comrade Proud, this could even turn out be more entertaining than what expect from Sunday's upcoming episode 60 Minutes!
Wouldn't it be smart promotional idea for the colony's ministry tourism to reach out to the Mascot icon for the Energizer Batteries to come to Ragged Island to film a TV commercial? Can't write this. Just, can't how well the odds be in favour that our PM and Mascot icon, will from the get go landing on out island - hit it off and me sure hope camera crew does capture on film - we PM trying chase down some energizer mascot character - all over Ragged Island?

"Wouldn't it be smart promotional idea for the colony's ministry tourism to reach out to the Mascot icon for the Energizer Batteries to come to Ragged Island to film a TV commercial?"

Minnis has a RAGGED COUNTRY ………….. Has a lot to talk about (and DO) from Inagua to Abaco

The Advisors and Educated Staffing should be informing all that Ragged Island is a fundamental keystone eye opening national historical awareness of the Bahamas nation Sovereignty ...Defence of its Territory with the wicked evil Communist Cuban Air Force and its Mig war planes...entering Bahamian waters and visciously gunning down Bahamian Defence boat Flamingo. The Communist Cuban Mig planes were instructed to illegally enter clear Bahamian territory that the clearly flagged marked Bahamian Flamingo boat ...was the ridiculous ...pirate vessel...!!!!!! After Cuban jets gunned down Bahamian boat Flamingo...then cowardly...cowardly gunned down down Bahamians in Bahamian waters...Survivors then went to Duncan Town Ragged Island....and yet again Cuban jets terriorized the Bahamian Ragged Island citizens island residents...and Cuban helicopter landed....And yes Bahamas got quick assistance from US helicopter coast guard to try and find Bahamian marines gunned down and missing in the waters....and even Mig jets tried scaring US helicopter. Anything on Ragged Island developments now and the future must always have chapter on evil wicket Communist Cuban viscious murders on Bahamian territory mentioned to the world.