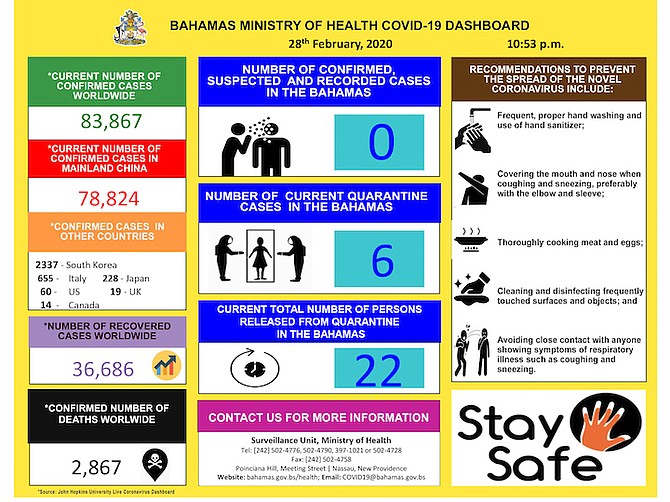 THE number of Bahamians in quarantine for signs related to the novel coronavirus has increased to six, according to Health Minister Dr Duane Sands.

On Monday, four Bahamians were placed in quarantine after travelling on a Canadian flight with a passenger that tested positive for the deadly disease.

While the minister did not reveal the circumstances surrounding the new additions, he did confirm that neither individual was on the Canadian flight with the four other people who were quarantined.

Since the World Health Organisation (WHO) declared the new strain of the coronavirus a public health emergency of international concern, countries around the world have implemented travel restrictions on visitors from China.

Many nations have also quarantined citizens that would have been in the affected region recently.

Asked how his ministry was able to identify citizens that might have been exposed to the virus when travelling, he explained: “The Bahamas is a participant in the International Health Regulations 2005, which mandates that all member countries of the WHO have a requirement to report certain matters of public health concern through the IHR mechanism.

“The focal point of the IHR mechanism in the Bahamas is the chief medical officer and so we have agreed that if there is a sentinel event that occurs in the Bahamas that we will notify the IHR within 24 hours. That is true in every other country.”

Dr Sands said that in the case with the four persons in quarantine, the “mechanism was triggered” when the person on their flight tested positive for the virus.

“They subsequently would have notified the Bahamas, I believe on the 23 of February,” he said.

“We then had to find those persons and that took about 12-18 hours and then once they were identified and located we then transferred them into the quarantine facility.

“That’s how the system works and as long as your public health infrastructure is intact — as ours is — it works quite well.”

Dr Sands said his ministry is monitoring the virus diligently through the existing public health infrastructure that has also allowed officials to monitor other diseases like tuberculosis, influenza and cancer.

He also confirmed that all of the people currently in quarantine are “asymptomatic,” having shown no signs of any respiratory disease.

Yesterday, the minister took to social media to address public concerns of the virus spreading locally.

In a video posted to his Facebook page, he explained that the MSC cruise ship that was heading for this country after being denied entry in Jamaica and the Cayman Islands, did not have any passengers that tested positive for the virus.

“For the record, the ship was denied entry into Jamaica not because there was any evidence of COVID-19 or coronavirus infection, but because they had incomplete maritime documentation,” he said.

“The patient on board the ship who was isolated has been lab confirmed to have influenza. This was confirmed at a high level meeting chaired by the Prime Minister of Barbados Mia Mottley and the Director of the Pan American Health Organisation (PAHO) Carissa Etienne and it involved most of the ministers of health of the CARICOM nations.”

Dr Sands insisted the government would not “put the safety and the welfare of Bahamians” or the country at risk.

He added that “out of an abundance of caution,” officials requested that a test for the novel coronavirus be done on the patient to ensure that “there is no threat whatsoever.”

“In summary, this patient does not have any evidence of COVID-19 infection and there is no reason to deny entry,” he said.

“The ship successfully docked in Mexico and the passengers disembarked without difficulty.”

According to the MSC Cruises’ website, the ship is expected in the Bahamas on Saturday after leaving Mexico.

A person with no medical training and a grain of common sense could do a better job than Sands. What a waste!

``The ship successfully docked in Mexico and the passengers disembarked without difficulty.”

According to the MSC Cruises’ website, the ship is expected in the Bahamas on Saturday after leaving Mexico.``

The same Mexico where a man just tested positive for the Red Chinese Virus, Sands is a disgrace to the people, a monkey would do better than him

And by the way, it's just not sufficient for Minnis to essentially say to us: "Don't worry, my government has made sure we ready for it."

It's also not the least bit comforting to hear Sands essentially say: "Don't worry, our healthcare officials have been working closing with officials at the Pan American Healthcare Organisation and WHO to ensure our readiness and these organizations will have our backs in the event of a wide spread out break in the Bahamas."

The paucity of detailed information from Minnis and Sands should have all Bahamians most worried. We simply cannot afford for our government to go through another teachable moment, essentially learning everything much too late on the fly, as it did with the Hurricane Dorian crisis. And it's no longer a question of whether there will be a serious wide spread outbreak of COVID-19 on New Providence, but rather when.

It seems the people have more common sense than Sands, anyone putting trust in this moron has serious problems especially considering what he did to the bodies in Abaco

U.S. healthcare officials are already advising that individuals in the more vulnerable highly populated communities (e.g. metropolitan cities with major airport and cruise ship terminals) stock up on at least a two-week supply of water, less perishable foods, and medications. They know the worst is coming.

The Coronavirus is blown out of proportion by media hype . The 78824 infected in China equates to .005% of their population.

We obviously can do as good a job at containing the virus as China has done, but like everything here we’ll bumble along just fine.

If our infection rate is 5 tones that of China, we will have less than 100 people infected.

Of that 100 infected , sure a couple might die. But that’s no better or worse than a typical nights murder spree.

The media loves to create mass hysteria, but the numbers don’t lie

Do the math people, this virus is nothing to worry about.

It would not be wise to trust any of the very little verifiable info being reported by Red China on their COVID-19 outbreak. Also the incubation period of COVID-19 could be much longer than three weeks, i.e. individuals could be infected and not show any symptoms for a very long period of time during which time they could be infecting many others. U.S. health officials are also now reporting that COVID-19 will likely not disappear with the coming of summer and could continue spreading well into next year. Most recent info indicates that the mortality rate is very high for individuals over age 60 whose immune systems may be compromised. In these individuals the virus triggers severe breathing difficulties associated with pneumonia and often exacerbated by renal (kidney) failure. THERE'S VERY GOOD REASON WHY RED CHINA LOCKED DOWN MORE THAN 80 MILLION OF ITS PEOPLE, CONFINING THEM TO THEIR HOMES FOR WEEKS. AND JAPAN HAS SINCE SHUT DOWN ALL OF ITS SCHOOLS. COUNTRIES DON'T TAKE SUCH DRASTIC MEASURES UNLESS THE THREAT OF LARGE SCALE LOSS OF LIFE WARRANTS IT. But you're free of course to keep your own head buried in the sand.

The Government needs to prepare our people now, there is a high index of tourist still coming into the country from other known virus countries. Please STAND UP for your health my Bahamian people!!! The time has come!