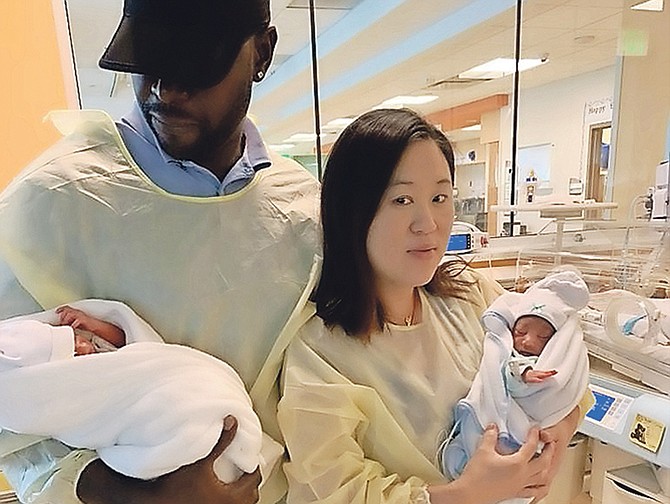 Parents Michael Russell and Cecilia Sit with their twin babies Michael Jr and Jed, after Jed survived an operation to remove a growth one and a half times the size of his own head.

AN 11-day-old baby - one of twins - is recovering after doctors successfully separated him from an undeveloped third baby.

The team of physicians, led by neurosurgeon Dr Magnus Ekedede, successfully removed the large growth that was all that remained of the triplet from the back of the baby’s head in a groundbreaking operation.

On February 16, Cecilia Sit gave birth to Michael Jr and Jed Russell by way of a C-section operation. 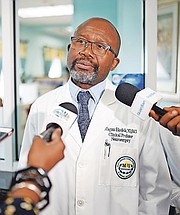 While Michael Jr, named after father Michael Russell, was born healthy, weighing four pounds and five ounces, baby Jed was born five ounces lighter, with a growth “one and a half” sizes bigger than his own head.

“These were twins but (were) supposed to be triplets because one of the twin babies has an enlarged head like another growth at the back of the head which we call encephalocele,” Dr Ekedede explained.

“Of course what is inside the swelling — what I call the false head — would be brain tissue, altered haemorrhagic liquid, plus other complex structures…like veins and sinuses that supply the normal baby.

“Unfortunately, sometimes those structures are inside the cyst or inside the tumour…so the difficulty with this kind of surgery would be that you have to make sure you don’t damage the structures because that is the same structures that supply everything to the normal baby.”

Dr Ekedede said giant encephaloceles are very rare. He added that although the surgery was very difficult, he and his team were grateful to be in a position where they could “help someone survive.” 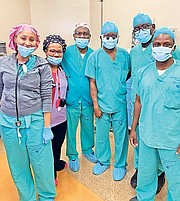 The medical team that worked to save baby Jed.

“...This is like teamwork, it’s amazing we’ve done it again and I say it to say because some of the news we do here we just have to let people know what is possible in this country.”

Describing Baby Jed as a “miracle child,” he added: “The baby never died on the table (although) we anticipated it might die...look at what God can do.

“(If you see) how the baby looks compared to the other child it’s just the same — identical — so we’re really, really happy for what we can achieve at PMH.”

Ms Pit, a first time mother at 40 years old, told reporters she found out Baby Jed had an extra growth when she was four months pregnant.

“Normally, the children are terminated when you find out (something so) huge because we don’t know if it’s going to be a normal child (seeing that) brain cells (are) out of the brain with the hole in the back,” she said.

“Will the baby stand? Will the baby cry? Will he eat? Will he suck? Those are the questions that I had to go through. (But) because I had twins, my decision was definitely not to terminate and we had hopes and we kept him.”

Ms Sit said in the weeks leading up to her delivery, her physician told her he was not sure what would happen when the child was born.

“(He asked) ‘When he comes out what will you do? Will we let him rest (in) peace?’ (But) I said you know what, if he’s kicking and fighting I’m going to kick and fight with him.”

According to Ms Sit, Jed is currently in recovery and practitioners are noticing “a lot of closure.”

“Once (the) doctor gives him the all clear to go home, we’re going to make sure the rest of his body is good because it’s not just his head, (the encephalocele) affected other organs.

Ms Sit explained that Jed will have to get heart check-ups because he had holes in his heart since his “ventricles were not growing straight from the encephalocele.”

Still, noting that his name means “beloved of the Lord,” she insisted that her baby was a fighter.

“Some parts of the world I was told...would terminate by injection into the mother’s womb so one of them would pass away hoping that it would not affect the next one and obviously the outcome is still unknown,” she added.

“So that’s another question that I had to go through and I’m like no, I’m not going to put any of them in jeopardy just to make sure that one lives.

“They’re both in me and I didn’t find out until four and half months so they’re already a part of me and both of them were kicking, they were fighting for space…you could feel it a part of you.”

Ms Sit said that even when she was worried, she avoided thinking negatively because she realised her children were “feeding off of her energy.”

“At this age to have twins gave me a lot of white hair, two tooth cavities, gestational diabetes, swollen limbs and also carpal tunnel syndrome throughout my entire pregnancy period.

“...If you have another mother like me who goes and researches things and see how people handle these situations in the world where I found one in 10,000 (survivors) — if I were to find one like what we’re doing now, I would have been more confident.

“Obviously the confidence (was) already there but it was just not proven. But now, it’s proven that it can happen and we will see the quality of life later but what’s important now is there is life.”

"Comrade" Jed? There are some good doctors at PMH.

Comrade ThisIsOurs, there any many excellent members hospital's entire medical team. It's the damn system that is badly broken. I think if you were to compare how this red government has addressed the brokenness at PMH - when compared to the the previous administration - they're equals.