Customer Complaints As Single Use Plastic Ban Comes Into Effect 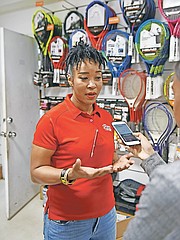 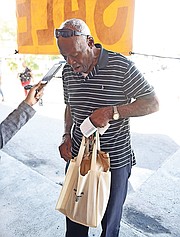 CONSUMERS are already voicing their anger as the new single use plastic ban which has now come into effect.

As of January 1, businesses are mandated to sell plastic shopping bags for 25 cents to $1.

Keva Gottlieb, Manager at The Sports Centre in the Harbour Bay Shopping Plaza said customers have already complained about the charge.

“There’s been a bit of a push back from customers because they’re questioning why, if it’s a ban, that they have to pay for something and I can understand both sides of it where yes you want them to be more aware that we are moving towards reusable, but to have them pay for something that’s kinda of been banned in the stores or banned for the retailers it’s a bit confusing but we are trying to push them towards reusable,” she admitted. 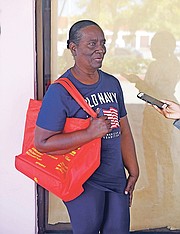 Verdell Fox saw the benefits of the ban for the environment.

Meanwhile, Marcian Williams, a sales professional at John Bull located at the plaza, has heard mixed reviews from shoppers. He noted some were unwilling to pay the fee and end up deciding to carry their purchases in their hands.

Mr Williams said: “Some customers are outraged by it and then others are just okay with it. I guess it depends on the position I guess. A lot of people find it unnecessary I guess but it is what it is. It’s nothing that a lot of people can do, so they just pay the 25 cents anyway.”

Other stores like 700 Wines & Spirits were ready for the ban.

“Coming in a liquor store, some people prefer like the brown bags rather than plastic because it’s easier I guess and in my sense it keeps most of their beers cool.

“So, from what I’ve experienced, plastic bags they’re black, but like the discreteness of it, but there’s no issues or complaints about it so far,” he explained. 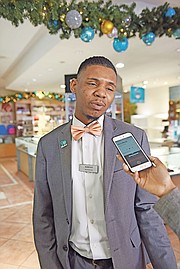 One shopper, Leroy Grant, strongly opposed the fee and felt the bags should be offered to consumers without charge.

“It’s no value to me to spend $8 for two bags to put my groceries in. I go home when my wife comes home, we’ll decide what we’re going to do about groceries. We’re not buying any bags.”

Stores with single use plastics have until June 30, 2020 to deplete their stock during the six-months transition period.

Yet, Ms Gottlieb revealed The Sports Center was not sure what the company will do with the plastic bags they are unable to get rid of.

“Well as you know we’re quite a large store with three stores, actually we have five stores combined including our HeatWave stores,” the store manager informed.

Ms. Gottlieb should be made aware that this ban was talked about prior to being put in effect. Sports Centre should have long before stop purchasing bags in an effort to have less once the ban went into effect. Now they will be stuck with an abundance of bags... I don't feel sorry for them.

The stupidity swirling around this "Ban" is hilarious if it weren't so tragic. The import is Banned effective Jan 1 st. The use, domestically is Banned effective June 30th. The 6 months window accomplishes two things: it attempts to retrain (via being charged) the population to use re-usable bags, and b) it allows for existing inventory to be depleted/used up. The Nominal fee is an attempt to cause the public to avoid paying it. While the revenue does go to the merchant, it is not the merchant doing this by choice: IT IS THE LAW and MANDATED. Heavy fines will follow either not charging or attempting to bring in more of the banned types.

The ban is stupid. It’s just that simple.

If there were any genuine concern about plastics they would go after the bigger problems; like bottles for instance.

Notice the ban allows 6 months for corporate inventory depletion. Do you get it, 6 months so the corporations don’t loose any money. So screw the environment for another 6 months.

Anyone who doesn’t see this for what it really is, well you are a complete fool with an inability to reason honestly.

Europe has banned them lomg time ago, people go shoppimg with their own bags ( made out of cotton a.s.o.) You Bahamians should know better that Mama Nature and the ocean should be protected, but apparently you don't care. Tourism is your income number 1. so keep the waters and beaches and your back yards clean. Why is it possoble that the Islands of the Seychelles, Indian Ocean can live without plastic bags ?! they have banned them and it improved the environment and the tourist & islanders are very happy about it.

same for most of Canada

Yup, because it is the plastic bags vault. I hate it when plastic bags jump out of my hand and hit the ground instead of the garbage bin. Why would a human being throw trash on the ground, or throw trash in the water? That baffles me. Some humans are worse than animals! We need to police the recreational areas during public events also. The amount of soda cans, bear cans, and bags that jump out of people's hands is ridiculous.

Reusable bags use far more plastic, use more energy to make and cause more water pollution than those plastic bags we used to get our groceries bagged in. Plus we used those bags as garbage pail liners. Now we have to buy plastic garbage bags which are heavier, use more energy to make etc. And we have to wash our reusable bags. More water and energy use. The only savings to the environment was .000004 less plastic in the ocean from the Bahamas. That savings has been wiped out by having to buy reusable bags and buy garbage bags. Not to mention what this has done to the income of the bag boys at grocery stores. Nice job.

Just how stupid can our government possibly be? Oh, wait a moment. I forgot this government is led by Tweedle-Dumb Minnis.

The plastic bags and most other non-bio-degradable products that are clogging up and polluting our landfills and ground water should be banned, period.

Plastic bags do not clog up the landfill or pollute ground water.

This ban on single use plastic bags has reveal several things.

Governments in the Bahamas go aboard and sign various agreements committing the Bahamas to various things.This is why this ban came in to place this January. The media does a poor job here explaining things.

Despite the political propaganda,the Bahamas is way behind in its.development.Wait until Bahamians have to separate their garbage. That has been done for well over thirty years in Canada and the UK.

There is a huge class divide on New Providence.It is seen on social media when some persons were discussing this ban.Persons who question the ban,were called by other persons dumb and d-average.Some persons felt that they could not afford to constantly pay for plastic bags.

All stores that uses bags need to purchase the paper bags,like they used to before. not to long ago all stores used to have all sizes of brown bags