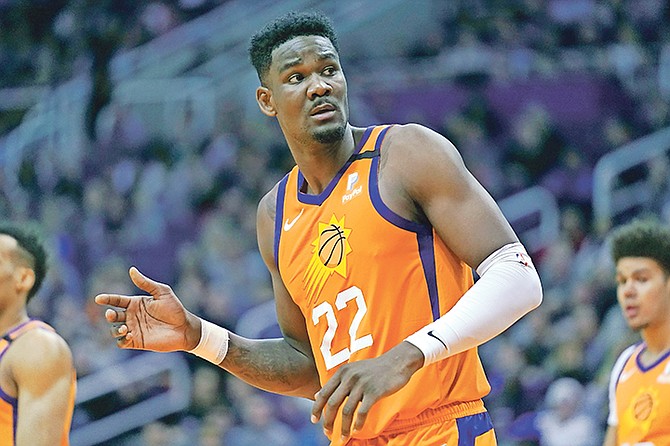 Suns centre Deandre Ayton (22) in the second half against the New York Knicks on Friday. (AP Photo/Rick Scuteri)

PHOENIX (AP) — Deandre Ayton snatched the loose ball, glanced down the court and saw Aron Baynes streaking toward the rim with no one around him. The 6-foot-11 centre never hesitated, launching a pass to his 6-10 teammate and hitting him in stride for the easy bucket.

It was a crucial moment in a fourth-quarter rally for the Phoenix Suns, who recovered from a slow start to push past the New York Knicks 120-112 on Friday night.

It was also proof that Ayton and Baynes — two big men who started together for the first time all season — can share the court and thrive.

“I think it’s something we can grow, I do,” Suns coach Monty Williams said.

“It’s putting your best players out there and your best athletes on the floor.”

Booker scored at least 30 points for a fifth straight game, the longest streak of his career and tying a franchise high. Oubre shot 11 of 16 from the field, including 5 of 7 from 3-point range, and had 20 points in the second half.

“We just brought the fight to them,” Oubre said.

Ayton was playing in just his fifth game all season. The 2018 top overall draft pick missed 25 games because of a suspension and then missed a few more because of a sprained ankle shortly after his return.

Now he’s played three straight for the first time this season and the Suns have won two of the three.

“It’s adjustments,” Suns guard Ricky Rubio said. “Baynes has been playing really well and we need (Ayton). So we try to find a way where both can play at the same time and share the court. It’s going to be a good weapon for us.”

Marcus Morris scored 25 points and Bobby Portis added 20 off the bench for the Knicks, who were trying to win four straight for the first time in more than two years. Julius Randle had 13 points and 13 rebounds.

The Knicks led for a big chunk of the game, including 87-83 after three quarters, but the Suns rallied to take a 94-93 lead on Rubio’s 3-pointer with about 8 minutes left. The teams traded the lead for the next few minutes, but the Suns pushed ahead for good on a short jumper by Baynes with 5:22 left.

The Knicks couldn’t keep pace, shooting 2 of 11 from 3-point range in the final quarter.

“We got good shots, honestly,” Randle said. “We scored enough points to win the game. We just couldn’t get stops. We had a slow start in the third quarter and they were confident the rest of the way.”

Coming off victories over Brooklyn, Washington and Portland, the Knicks got off to another good start and led 61-51 at halftime. Portis scored 11 points in the half and Randle had 10.

Phoenix had another lethargic first half, two nights after falling behind by 33 points against the Lakers. Booker scored 17 points before the break but the Suns missed all nine of their 3-point attempts.