Don’T Blame Us For Bad Officers 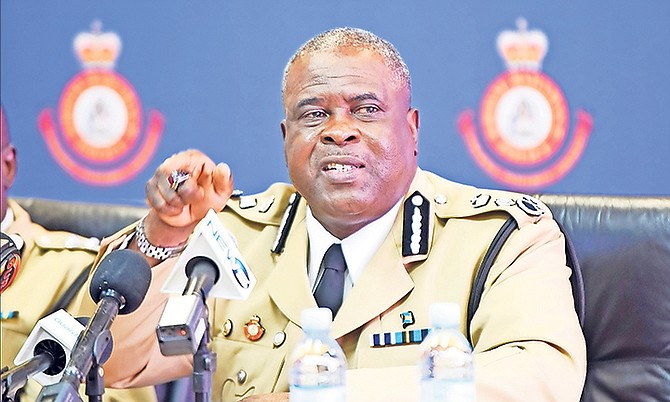 “We only could give you what you give us,” he told reporters, “and we only could hope that the little training that we give them, along with what you should’ve done while the person was a child, that they would be able to behave themselves.”

He was responding to a question about police brutality during his annual meet the press event at police headquarters.

The issue resurfaced when viral videos depicted police beating people with batons at the New Year’s Junkanoo Parade, leaving one man bloody and several livid over the physical attacks.

Commissioner Ferguson suggested he is dissatisfied with the conduct of some officers on the force.

“(Police brutality is) always a concern for an organisation like the police force because you’re working hand in hand with members of the public and you continue to do training with respect to these, how to behave and all those things,” he said. “I recruited some 200 officers over the last two years.

“Members of the police investigation team, to employ officers, went to every single location where we had an application from someone who wanted to come in this force. We asked questions of mothers, fathers, sisters, brothers, aunts, cousins, neighbours and persons in the community: ‘is this person fit? Very nice person’ (they responded), ‘you couldn’t find a better person than this individual.’

“So, we took your word and we hire people, your sons, your daughters, your brothers, your family members and we hired them because they are Bahamians and rightfully we would think that all Bahamians would know how to behave themselves, all, not just police officers. The Bible tells you train up your child in the way they should go. By the time you reach the police force you ain’ no child, hey? When you reach the police force you accountable. So what do you expect to get? You only could get what you give us but a lot of time people believe the police force is responsible for bringing up your children. We will train them in how to maintain law and order, how to behave themselves in carrying out their duty, but training up the child, the mind of the child, that is the responsibility of the parents.”

When asked about timelines for addressing complaints against police, the police chief did not say how long people who make complaints could expect a determination to be made by the RBPF’s Complaints and Corruption Unit. Some residents complain that years go by with no answers or resolution to their concerns.

According to police statistics for 2019, there were 151 complaints made against police, a 38 percent decrease from 2018; of those matters, 81 have been completed.

Details on the findings of the investigations were not provided. Unlike his predecessor, Ellison Greenslade, Commissioner Ferguson has not periodically disclosed how many officers have been discharged each year because of misconduct.

“If you make a report then you have an obligation to go and find out that the man in charge of complaint give you an update on your complaint,” he said. “These things are not done in isolation. If you make a report I expect the man in charge of complaints would sit you down and tell you what is the status of your complaint and if that is not happening then you need to talk to the deputy commissioner, he is responsible for discipline. All of these issues where you see people are complaining about police officers, that is the deputy commissioner’s job and he is quite able to talk to you and give you a status report when you find that it is not forthcoming when it is from the unit. I want to encourage people, don’t just talk things, take action.”

ANTHONY FERGUSON SHOULD BE IMMEDIATELY FIRED!!

His blaming totally unnecessary police brutality on poor parenting and dishonesty from civilians interviewed by investigators conducting background checks into prospective officers is so far beyond the pale that it confirms without a shadow of doubt that he should never have been appointed Police Commissioner. This demented brute of a man is an outright threat to every single Bahamian and under no circumstance should he be allowed to remain in office. WHERE THE HELL IS MINNIS!!!!!!

This time I totally agree with you. His statements are unintelligent drivel. There is hardly ANY accountability of when officers beat civilians. The RBPF is strictly to blame for this foolishness.

Officers can do whatever they want (including putting bags over SUSPECTS' heads) and beat them up. Then NOTHING happens to these officers.
There's NO ACCOUNTABILITY, that is why the police force is the way it is. Too many cover ups. The officers in charge are strictly to blame. If they themselves don't out-rightly condone it, they look the other way.

How many accused suspects do we hear are going to court, but have to be taken to the hospital first? The officers are allowed to be judge, jury, and sometimes executioner. BTW - where is Marvin anyway? SMH

This may be the saddest, stupidest thing ever uttered by a Bahamian government official — and that’s a pretty low bar. Utterly astonishing in its stupidity.

What a stupid statement, this man should not be in charge of our police... Wow.....

This is insight. If this man is in charge then we now know where the problem is. He obviously does not posses the mental capacity to run this organization....

Guess Marvin Dames statement that the police commissioner is on the way out looking like more sense now.

BRAVO COMMISSIONER.... I FULL SUPPORT YOU ON THIS ONE. WE ARE ONLY GETTING THE SOCIAL RESPONSE OF WHAT WE SOWED IN OUR CHILDREN!. I HAVE BEEN PREACHING THIS FROM OCTOBER OF 1999.

Before reading the entire article I would've disagreed because the title sounds like he's playing the blame game, but he has a point. We have to take action we are too used to sitting back, watching and complaining. Still the toleration of police brutality has just been overlooked for so long I feel like by now you should've taken an approach to say how can this be fixed rather than just ruling it off as you get what you give. It sounds lazy and just like you don't care.

Yup, we get what we have given! I have to agree with Commissioner on this one. We have become a dishonest society and we are raising dishonest young people. Good luck!

Get a grip on reality. This is a corrupt institution, you either conform or get out.

There is little mentioning of the Police Training College of the Bahamas.

At this Training School the curriculum should be and must be thorough encompassing the trainees recruits to deal with these situations. Trainees recruits must be able to pass all these conflict situations before graduating them and putting them on the streets.

Quite horrifying to have these officers in these situations with harm to alleged culprits in public AND also to harm which can also occur to themselves.

Time to immediately suspend and review Police Training College curriculum and teachers training and withdraw all students, graduates to have reevaluation and re-education before incidents like this happening again.

Least we forget. The police force had numerous editions of ‘death squads’ and ‘buses of pain.’ When the death squads went out, the persons they went in search off will usually not be brought back alive, and the kicker to the police report was that this person ‘Fred on police officers and put them in fear of their lives.’ And the greatest testament of this was under this same commissioner, when police raided a residence in the death of night and executed every male on the property. Some begged for their lives and others were still asleep and others were hiding when they were heartlessly murdered by police officers. Did these officers come to the police force with this type training and killer instinct. Then there was those ‘buses of pain’. Officers would arm themselves with golf clubs, baseball bats, lengths of 2x4’s. They would go to local bars on alcohol until they lost all sensibilities and sensitivity. Then they would drive up o any individual they see walking and , like Blacks in South Africa, the person had to give account for his presence. He was assaulted and abused and sometimes left with a broken arm or leg or internal bleeding even. The officers were just as ruthless when they stopped vehicles. Sometimes the driver would still be in uniform indicating he was going to or coming from work. Made no difference they would rip his car apart. Dash board back trunk pull out the seats and if the driver or any of the occupants flinched or uttered a word, they were mercilessly beaten. And then had to pretend an officer didn’t take their cap o sunglasses or even cash. So the commissioner got it wrong. It’s the police who taught the young men this rouge, violent and even deadly behavior the country is experiencing today.

Those officers were in public they had zero concern about anything they were doing. The thought didn't even cross their minds that anyone would object. Their senior officers and the Minister of National Security were all a block away, thousands of eyes were watching them. The problem is not how they were brought up. The problem is police culture.

surprised anyone complains at all because nothing ever has resulted, not once, unless it was politically motivated either way, from these filings of complaints ...... right?

The most scariest thing the commissioner said is that God has the answer although this is the dumbest shit yet. Leaders should not be rendering to simple solutions or blame

Welcome to New Royal Colony Constabulary (NRCC)!
From day one at precisely 0800 hours - acting under full marching orders governor general, the newly recruited Comrade Chief shall forthwith commence a process for the swift demilitarisation New Royal Colony Constabulary (NRCC), which shall encompass but not be limited to the standing down all military enforcement tactics, battle ready fatigues, along  ordering the orderly disarming of all constabulary members, excepting select few of more senior rank officers. Consideration shall also be given to doing away with the wearing officers khaki dress. Finally, A-Z reading Evidence Gathering and Writing Down What Witness Said manual - , shall be made for mandatory study, regardless rank, pay-scale or tenure.

Quote. Forrest Gump...Stupid is what stupid does. Now you see out problem.

This demented brute Ferguson is much worse than stupid....he's down right evil and his evil has permeated the entire police force. WHERE THE HELL IS MINNIS HIDING??!!!

The level of ignorance on display in this blog more than vindicates the Commissioner as the level of intelligence and morality in the RBPF recruitment pool is just a mirror of our society at large these days. As Godson commented earlier, we are reaping what was sowed back in the '90s, thank you Sir Lynden & Co, those chickens have come home to roost, so don't bitch now that we're getting crapped on.

You miss the point entirely.....but as a fatalist, one who will never see the cup half full, that's not unexpected of you. Pray none of your family ever become a victim of totally uncalled for police brutality of the kind Ferguson supports.

POLICE Commissioner Anthony Ferguson is overflowing with mushy-green-poo! Police brutality and torture of civilians has always been a well-known norm in the Bahamas. The video will have absolutely no effective change in the deep culture of police brutality.

Pindling, Ingraham, Christie, and Minnis, administrations 100% condoned police brutality and cannot escape the consequences and negative connotations that have now surfaced due to the video!

There you s no hope!

The old "The public gets the government they deserve" comment.