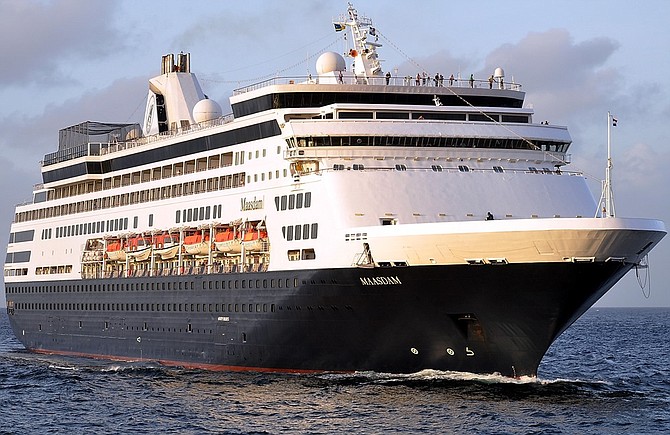 The government was yesterday challenged to bare its environmental teeth and hit Carnival Cruise Lines with the maximum $30m fine after more pollution incidents in Bahamian waters were exposed.

Sam Duncombe, the Bahamian environmental activist who last year unsuccessfully sought to intervene in the US court case against the cruise industry leader, told Tribune Business that the Minnis administration has “the perfect opportunity to prove me wrong” over her “zero faith” in its ability to enforce its new environmental laws package.

The reEarth president said the US government’s action against Carnival had provided The Bahamas with all the evidence it needed to initiate legal measures of its own after the monitor appointed by the south Florida federal court disclosed further environmental infractions - some of which occurred while vessels were in port in Nassau and Freeport - that took place in 2019.

The monitor’s latest report, filed on New Year’s Eve, detailed incidents including the March 6, 2019, discharge of 34 cubic metres of black water/sewage in Bahamian waters from the MS Maasdam as it sailed from Half Moon Cay, the private island, to Fort Lauderdale.

Also cited was a September 9, 2019, episode involving the Carnival Sunrise where “a considerable amount of rust” was discharged into Nassau harbour after a technician started up an “infrequently used water pump” while the vessel was docked at Prince George Wharf.

The incident was said to have “caused visible discoloration on the port side in the water for some period, and then disappeared with the current,” the monitor’s report said. “The incident was reported to the Nassau port agent to notify the Bahamas Port Authority, and was recorded in the eLog.

“As soon as the visible discoloration in the water was observed, the sea water pump was stopped and testing was suspended. The chief engineer ordered the technician not to initiate any type of operation during the port stay that caused visible discoloration in the water, and to coordinate accordingly with the EOOW (environmental officer on watch) for a suitable time of operation for testing.

“It is not normal practice to check the pipeline prior to the test. Carnival Cruise Lines will discuss the issue of testing in port during the next environmental compliance conference call.”

The Carnival Ecstasy, meanwhile, produced a 200-litre discharge of “grey water” that lasted for five minutes when docked at Princess Cay off Eleuthera. This was described as a “violation” of Carnival’s own policies caused by the failure of a sensor on a ballast tank, which was ultimately repaired.

“Improper rigging” also caused the lids on food waste containers to “slide around” when they were being transferred from the Carnival Magic to tenders at Half Moon Cay on June 25, 2019. Carnival also had to contend with the leak of five gallons of glue into the water while the Caribbean Princess was docked at Grand Bahama Shipyard on June 21, 2019, although this was recovered, plus a contractor’s ‘whistleblower’ report on November 2, 2019, that the Carnival Sunrise had been “discharging grey water on The Bahamas’ base line”.

The latter claim is still being investigated, but Mrs Duncombe yesterday urged the government to “get our $30m from Carnival” - the maximum fine permitted by the legislative package passed last year, including the Ministry Of Environment Bill; The Environmental Planning And Protection Bill; and the Environmental Protection (Control of Plastic Pollution) Bill.

Arguing that the incidents involving Carnival are likely “the tip of the iceberg” when it comes to the cruise industry’s impact on the Bahamian waters, she blasted successive administrations for failing to realise that the environment is this nation’s major economic asset and implement protective measures accordingly.

The environmental activist also called on all Caribbean nations to develop a uniform set of policies, laws and regulations for the cruise sector to prevent them being “played off” one against the other by a multi-billion industry that will simply threaten to switch its ships to another port if one government implements something it opposes.

Describing the $20m fine levied on Carnival by the south Florida court as “a joke” given the company’s deep pockets, Mrs Duncombe voiced fears that its environmental infractions will continue “as long as they keep spanking them on the wrist without any real consequences”.

“Our government is fully aware of all these transgressions but welcomed them with open arms in Grand Bahama,” she told Tribune Business of the approvals granted for Carnival’s $100m port project. “Their lack of compliance is because they never get punished.

The US-court appointed monitor, in his latest report submitted on January 7, 2020, provided a damning critique of Carnival’s internal culture and attitude towards the environment, arguing that its slow progress in meeting the goals set for its five-year probation was due to failings among its “top leadership”.

The presiding US judge, Patricia Seitz, had already expressed concerns about Carnival’s slow progress in meeting these targets, adding that a company of its size “will not turn on a dime”. And Steven Solow, the court-appointed monitor from the Baker Botts law firm, said there was unlikely to be much improvement until the cruise line altered its stance from the top down.

“A culture survey of over 70,000 [Carnival] employees identified the crux of the company’s compliance challenges as an issue of culture and leadership that stems from the very top,” Mr Solow wrote. “For years, the tone-at-the-top messaging has been centred on the value of delivering ‘joyful vacation experiences and breakthrough shareholder returns’, with comparatively little focus on the value of environmental compliance.

“These relative priorities were also made clear in practice—as evidenced, for instance, by the company’s lack of a strong, centralised compliance function comparable to its strong, centralised financial function. Leadership and support for the goals of achieving guest satisfaction, and strong financial performance are essential to the financial success of this industry-dominating cruise corporation.

“The company’s challenge is to elevate compliance to the same level of leadership and support. To do so requires a change from the top that is authentic and credible, backed up by concrete actions to support compliance on the ships,” Mr Solow continued.

“The areas of need are not a mystery. The company’s employees have repeatedly identified struggles with: Adequate staffing of ships (including in the engine/technical departments); workload; training; IT support; equipment and other resources; financial pressures to avoid expenditures; diversity and inclusion; workplace harassment and discrimination; and other issues noted in reports.....

“Without acceptance by top leadership of the need to change their understanding of, and approach to, compliance, the company appears unlikely to succeed in establishing a sustainable compliance culture - despite the sincere efforts underway by the company’s many dedicated and talented employees both ship and shore.”

Mrs Duncombe, in response, said yesterday: “The Bahamas has the perfect opportunity to follow through with these environmental laws now that Carnival has been caught dumping again, but I’m not holding my breath on that one. I’m waiting for them to prove me wrong, and the best way to show it is to go after Carnival with all the evidence they have. I’m waiting to be proven wrong.

“I have not seen anything from this government in a real, meaningful way to deal with developers trashing the environment..... The Government needs to look into taking Carnival to court now. Maybe they could be fined up to $30m with this legislation. Let’s go get our $30m from Carnival. It’s great to pass laws, but let’s see it happen.”

The reEarth president said the Government’s five-year failure to enforce the closure of the Blackbeard’s Cay attraction, despite herself and others obtaining a Supreme Court Order that this be carried out, meant she had “zero faith” in the authorities’ ability to take action against Carnival and other major corporate environmental offenders.

Arguing that The Bahamas was “especially to blame” for failing to protect its environment, she added: “They [the Government] have zero ability to negotiate proper deals for this country. I don’t know who the negotiators are, but they suck.

“We always go into these deals from a position of weakness. We’ve got what they want, too. We seem to completely forget that; that the environment is our business, because that’s what brings people here. Yet in the same breath we allow developers to pollute and destroy the environment with no consequences.

“After Dorian you might think the Government will go back to the drawing board and change things, but we [environmental groups] remain on the outside with no discussion. They have absolutely no clue on climate change. We’re still willy nilly allowing this development to go here, that development to go there. If Dorian had hit Nassau we would potentially have been set back 30 years.”

Voicing fears that The Bahamas provides “zero oversight” of the cruise industry, Mrs Duncombe added: “I have no doubt that Carnival is the tip of the iceberg. We don’t have the wherewithal to monitor these ships, and if we did we wouldn’t have the political will to say: ‘Show us the records of how you dispose of bilge water, 100,000 pounds of trash.

“We act as of we’re beholden to them when they need us just as much. If you look at the money they make, who got the better deal? It’s not The Bahamas. It’s very disgusting to be honest, but it’s what we have to live with.

“I have zero faith in the Government. It’s not just this one. In 30 years I have become increasingly disgusted at the way people in government treat the environment and their lack of understanding that the environment is our bread and butter.”

She also criticised the current environment minister, Romauld Ferreira, a former activist like herself, adding: “I’d love to hear what he says to his fellow Cabinet ministers on the inside because what he’s saying on the outside is not impressing me.”

I am very confident that our government will not fine Carnival more than five hundred thousand dollars for any of these infractions. Actually make that one hundred thousand. Our consecutive governments are simply too scared to fine any foreign entity.

This is tantamount to a middle finger to The Bahamian Government.

Thank you Sam Duncombe, please keep up the good work.

They signed the contract while all this was going on? September 2019???? That's right about the time they rushed the signing. Iwas wondering what all the haste was about. I suppose if this had hit the press the optics woukd have been horrible and still are..so get everything locked up before the story comes out.

Carnival's cruise ships will continue to dump their shiit and contaminants whenever and wherever they want in our territorial waters with complete impunity because they know both Tweedle-Dumb Minnis and his darling little yapping white-haired poodle (D'Aguilar) are so compromised in so many ways that they will do absolutely nothing of any great consequence about it. In other words, Carnival has gone about handsomely rewarding both Minnis and D'Aguilar for the right to continue their shiitting all over the Bahamian people with no fear of charge.

Actually thetes a VERY peculiar clause in the act referencing dumping waste in our waters ~"unless permission is granted". All of our laws are written in this way. The question to ask is what's the going rate for permission?

Cruise ships are a tourism creation by the royal colonials and Sir Stafford's mindset!
Not only did a judge find Carnival guilty illegally dumping oil contaminated waste but found them guilty on second count intentionally falsifying their corporate logs to hide its intentionally dumping shi# into oceans waters. Just to be clear in asking, why does we government keep signing over colony's private islands to cruise ships operators - who keep appearing before the judge on charges being a serial polluter?

I wonder if our government also asks for these logs or do we just not give a crap?

Who is looking out for the fishes, mammals, the mangroves and other wild life like the swimming 🐖 🐖 which I love?