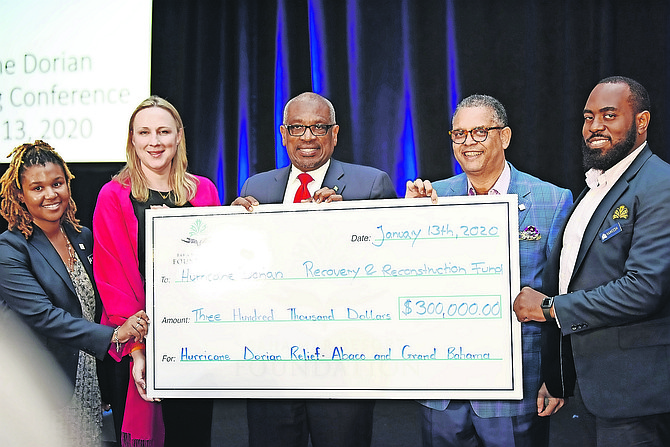 MINISTER of Disaster Preparedness Iram Lewis said yesterday the government has received some $9 million in donations since the passing of Hurricane Dorian.

The majority of those funds, he noted, have been allocated towards the government’s domes structures.

The temporary housing initiative was established by the Minnis administration after Hurricane Dorian ravaged Abaco and Grand Bahama in early September, destroying homes and displacing thousands.

“That’s a total of $6.4 million (that was spent on the domes) and that includes the shipping, the reservation and the relevant utilities…” he said during yesterday’s pledging conference.

“…(But) to date, we’ve received some $9 million (in donations) that was pledged. So far in terms, of expenditure, it was $7 million and the majority of which was for the purchasing of the domes for the family relief centre.

Added to this, according to the Central Grand Bahama MP, was the purchase of RVs on the storm impacted islands.

“Another area where a substantial amount of funds was spent was on the RVs to allow government services to be up and running and also, to create the utility connection was in the region of some $240,000.”

The gymnasium, among other sites, has been housing displaced storm evacuees since September.

On Sunday, the Department of Social Services reported there were 390 people remaining in shelters throughout New Providence, with 293 in Kendal GL Isaacs Gym and 97 at Bahamas Academy.

In an effort to help families rebuild and return home, the government established the Bahamas National Recovery and Reconstruction Trust Fund in November.

The purpose of the fund, according to United Nations Development Programme resident representative Denise Antonio, “is to create a predictable national multi-party fund that finances the recovery and resilience priorities to address the root causes of mobilities and build resilience to future disaster.”

“We also hope to facilitate mobilisation of the private sector in other Dorian resources,” she continued.

“ We will make sure that there is engagement with the local communities so that they have a part to play in the rebuilding and resilience. Of course, we have the participation of women and the vulnerable which are the youth, the elderly, children and the disabled.”

The fund, which will be managed by an independent and non political body, is expected to be operating by February.

Forget another staged photo op of a smiling red shirts First Viscount a.k.a prime minister!
Somethings either just doesn't make sense or maybe we just need more detailed breakdown? For example, the government says to date it had received a total of $9 million in actual spendable cash donations and spent $7 million of which in the neighborhood of $4.6 million has done been spent to purchase, ship and for the installation domes - but yet, despite the need being as great and widespread as from day one post Hurricane Dorian, there is nothing smiley about the fact that not a single dome has been turned over to any Abacoian family made homeless? What about the preview process for qualifying to get a dome - likes how many Abacoians have done met the dome qualification and where and from which islands, towns or settlements are they coming out of? Also, where is the rest unspent $2 million cash in donations collected?