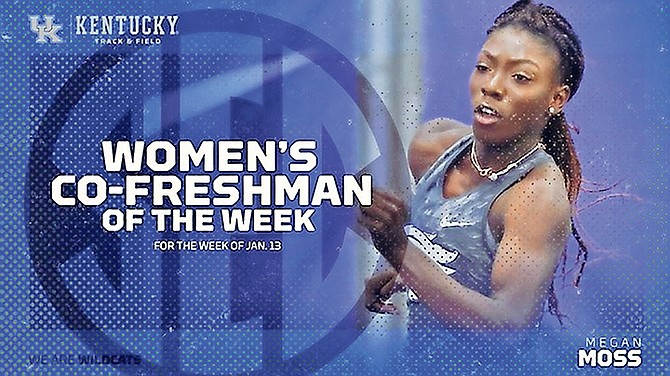 SHE has just gotten started, but already Megan Moss has established herself as one of the top female sprint contenders in the Southeastern Conference.

The St Augustine's College graduate, now in her freshman year at the University of Kentucky under the tutelage of Bahamian coaches Rolando 'Lonnie' Greene and Debbie Ferguson-McKenzie, was named the Women's Co-Freshman of the Week after her stellar performance as a member of the Wildcats' track team at the Jim Green Invitational.

She finished third in her speciality in the 400 metres with a time of 53.67 seconds that now has her ranked at the same position in the NCAA indoors behind her team-mate Alexis Holmes. Moss was ninth in the 200m in 24.09 for 10th overall in NCAA.

"I feel very good. This is the fastest that I've ever opened up in my life," Moss said as she produced her personal best indoors. "I am so excited about the rest of the season.

"It feels great. I'm very pleased with the entire performance. We just have to keep working and keep improving to get better and to progress during the season."

As a result of her performances, Moss was joined by two other Kentucky team-mates, sophomore Alexis Holmes and freshman Langston Jackson, who also got weekly awards from the Jim Green Invitational as the female and male runners of the week respectively.

"That definitely means so much. It means the world to me," she said.

"I was chosen out of all the freshmen in the SEC. This is the biggest and the best conference that the NCAA has to offer, so it's definitely an honour to receive the recognition."

Moss and the Wildcats will be back in action this weekend at the Nelson Invitational in College Station, Texas, but she will only be competing on the 4 x 400m for Kentucky, which is ranked sixth in the nation with a time of 3:41.41 that they posted at the Jingle Bells Open.

"I just want us to have a great showing in the relays," she said.

Over the weekend of January 24-25, Moss and the Wildcats will be back home for the Rod McCravy Memorial where she is expected to return to competition in either the 400 or 200, or both.

Moss, who is pursuing a degree in human health sciences, acknowledged that everything is going very well for her and she's looking forward to making the team that will represent the Bahamas at the Olympic Games in Tokyo, Japan, in July.

Also at the Jim Green Invitational, Shaun Miller Jr made his indoor debut as a freshman for Ohio State, clearing 1.99 metres or 6-feet, 6-1/4-inches for fifth place. Kentucky's sophomore Try Causey III soared for a meet record. The winning height was 2.18m (7-1 3/4) for the victory.

Miller also showed his versatility as he competed on the second leg of Ohio State's 4 x 400m relay team that was ninth in 3:19.53.

Devynne Charlton, running for Puma, had the 11th fastest qualifying time of 7.65 in the women's 60m, but she didn't contest the semi-final or final.

Instead, she did the 60m hurdles where she clocked the fourth fastest qualifying time of 8.44 in the preliminaries. She came back and posted the fastest time in the semis in a meet record of 8.12, but she lowered the mark to 8.07 to win the title in the final.

Mott was also eighth overall in the preliminaries of the men's 60m hurdles in 8.30. He got fourth in the semis in 8.20, but dropped to seventh in the final in 8.21.

Alex Ferguson, also a sophomore from Kansas State, won the race in 1:32.42.

Randolph Ross, a freshman at North Carolina A&T won in a meet record of 45.85.