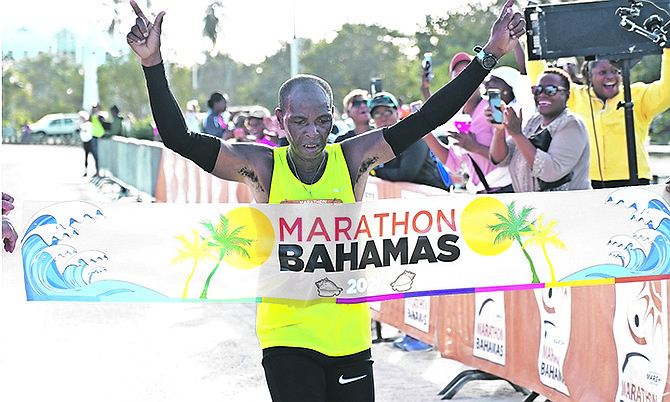 A testament to his consistency and longevity in the sport, Delroy Boothe returned as the overall winner of Marathon Bahamas in 2020, a decade after his first win at the event.

Boothe made Bahamian history as the first two time local winner of the country’s premier distance running event when he highlighted the 11th edition of Sunshine Insurance’s Marathon Bahamas Race Weekend with a winning time of 2:56.01 seconds.

The 47-year-old Grand Bahama native won the inaugural edition of Marathon Bahamas in 2010 and returned in 2020 to be the first to cross the finish line at Arawak Cay. “I was praying to God and he promised me some things and he told me he could do it. He told me he would blow me up one more time before he stopped me to preach and prophesize.

“I told everyone I came to win. I won it in 2010, I was supposed to win it in 2011 but the supplements I was taking I took them wrong and I dried out. I have an aunt that just passed in New York and my uncle in Jamaica, his birthday was Saturday and I couldn’t make them so I dedicate this win to them both.”

Boothe had been the top Bahamian finisher in several previous editions of the event and last year won the Masters division.

“I’m not even tired, I’m just excited. I expected to win because I knew I was putting in the mileage and I got kind of sexy,” Boothe said. “All on my mind is greater heights, they counted me out for years but once God is in the mix you are still in it. I run about 80-90 miles per week, it’s just me and God out there. It’s good to be a two-time winner.”

Gwen Jacobson was the top women’s finisher in 3:29:55. “It was a beautiful day to run in the Bahamas. It was amazing, there was so much support on the course and the course was absolutely gorgeous. We had a light breeze the whole way and the ocean, the water just motivated me the whole time,” she said. “When I went over the bridges they weren’t as bad as I thought. We came over the second bridge and Casey said, ‘I think we’re in the lead.’ We stayed in the lead the whole time and I kept expecting someone to pass me.

“The bikers were so supportive they kept encouraging us the whole way. I run marathons a lot but I had not run since the New York City Marathon in November. It was absolutely breathtaking going up the shore and coming back and it was just enough shade. I thought it was going to be too hot when the sun came out but God gave us just enough shade for a pleasant finish.”

The 61-year-old Rochester, Minnesota native said she and a friend left the frigid temperatures of the Northern United States to run in the inviting climate of the Bahamas.

“Never in my wildest dreams did I think I would finish first today. I have never won a marathon before, this is my first marathon win and I’m just shocked. My friend Casey Cooper who came in second, we always go somewhere warm for her birthday, she said let’s do the Bahamas marathon and I said ‘I’m in’ because we’re from Minnesota and we left a blizzard on Friday to come here. It’s been absolutely the best decision ever.”

In the half marathon, Clay Askew of the United States was the top men’s finisher and set a new course record to claim his share of the prize purse.

A wide cross-section of local participants took part in the marathon relay. The relay is a four-person team event with pre-set running distances of 6.2, 6.9, 5.6 and 7.5 miles.

Race Weekend continues to expand its portfolio and added the RBC Race for the Kids to this year’s agenda.

The RBC Race for the Kids began in 2009 with an inaugural event in New York City. In addition to NYC, runs are also held in 15 major cities around the world, including Chicago, Minneapolis, Toronto, London and Sydney. In the Caribbean, there are races in Barbados and Trinidad and Tobago.

The inaugural Bahamas Race was the 18th global Race and 3rd within the Caribbean. The Bahamas Technical and Vocational Institute (BTVI) was chosen as the partner and the beneficiary of the funds.

“Sunshine Insurance Race Weekend has evolved into something bigger than the marathon itself. It’s about everything the Bahamas said we are, and that is all showcased here. Marathon Bahamas provides the best marathon experience in the world,” said Sir Franklyn Wilson, chairman of Sunshine Holdings.

Route continues east to Montagu Beach with a westward turn onto Shirley Street all the way to Cumberland Street north. At Bay Street, the course continues to the west, hugging the northern shores of Cable Beach, Delaporte and West Bay Street with the turnaround ¼-mile west of Compass Point returning to the most eastern entrance to Arawak Cay for an oceanfront finish.

Race Weekend began with the hosting of the Susan Koman 5K run/walk, which started at Montagu Beach and finished east of the old Paradise Island bridge adjacent to the police station.

Congratulations, Delroy! You are an inspiration. I admire your commitment to the sport over these many years and your determination to win. Keep on running, my good man!