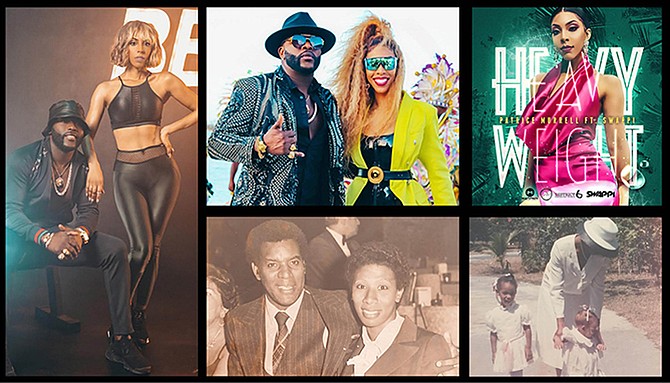 When you listen to the radio this week, you’ll likely hear a brand new song to dance to. Patrice Murrell’s latest single is yet another fun, upbeat tune. She is known for her bubbly pizazz; but in 2020, Patrice is showing off a more sophisticated, sexy, chic side of herself.

“Heavyweight” presents Patrice in a new light. She has been on the Caribbean music scene for a few years, but now she is taking her career to the next level and is being recognised by her colleagues throughout the region. Swappi, the 2019 International Groovy Soca Monarch, is featured on the song Heavyweight – a merging of Bahamian and Trinidadian culture, combining elements of Junkanoo and Soca.

“I loved that he was able to embody where I am in my career at the moment,” Patrice says of Azaryah Callander, the song’s main writer. “I have started a rebranding project and Heavyweight reflects that. I have earned my stripes. I am levelling up! I have worked hard to get where I am and I’m ready to take things to the next level. I wanted to give the audience a different side of Patrice.”

The thousands of viewers who saw the music video on YouTube since its release this weekend enjoyed a production that really showed off the beauty of The Bahamas and the liveliness of its people.

Patrice has been a great ambassador for her country. Swappi, along with Mad Men and Ultimate Rejects group, fell in love with Junkanoo music and Patrice’s style. Patrice’s song “Come to Wave” sparked their interest and they reached out to her. It was 2017 and back then, “Full Extreme” was a hit for Ultimate Rejects. Their connection was solidified in 2019 when Patrice performed at the One Caribbean Unite and Rebuild concert held in Trinidad, which raised funds for the victims of Hurricane Dorian. A number of Bahamian artists performed along with big names in Soca such as Destra, Teddyson John, Nailah Blackman, Farmer Nappy, Patrice Roberts and of course, the Ultimate Rejects.

“They love the Bahamian culture and sound that I incorporate in my music,” Patrice said.

“As a Bahamian I am proud to let other cultures know how special and unique we are… but also how similar we are to other regions like Trinidad. I have always been an advocate for merging Bahamian music with other genres. Heavyweight combines elements of Junkanoo with Soca. You will hear the familiar goatskin drums, horn and cowbells; but you will also hear elements of Soca that are fun and traditional to culture. It’s about two top artists coming together and creating great music together.

“If more Bahamians do this we could have more more regional and even more global reach. I have always been a forward thinker and a huge advocate for it. That’s not taking away from me culturally. It’s embracing my culture as well as other cultures across the world.”

Patrice has made music her full-time career. It is a sacrifice of love for her – she could have very well been climbing a corporate ladder to success. She has a Bachelor’s degree in Applied Finance and Accounting, and an MBA in Business and Finance. But a few years ago, her mother died from cancer and it changed everything for her.

“After mom passed, I started to reevaluate life, and I wanted to go in a different direction,” she confided.

She can thank her deep well of artistic talent. Her mother, Ruth Ferguson was a singer in the Lucayan Chorale in addition to serving as a lab technician at Doctor’s Hospital.

Ruth told her daughter that when she was three-years-old, she was performing at a Christmas recital when she grabbed the microphone and started singing and she has been doing so ever since.

Her father, Patrick Ferguson is a retired statistician. He is a classical pianist who has been a member of the Lou Adams Orchestra for more than 50 years. He claims Patrice has been singing from birth and recalls his amazement when she started carrying a tune along with the radio when she was in her baby carriage.

She and her sister Paige grew up in a home where they were always around music and they were always supported in the things they chose to take interest in. For Patrice, she started participating in singing competitions at an early age and has performed all over the world.

“This was never a game for me – music is my life,” she proudly says.

“I give 150 percent of my time to my music and my music career.”

The dedication and sacrifice it takes to make such a leap of faith and do what you love is exactly what Patrice wants to relay to others who may be thinking of pursuing their dreams.

“The song Heavyweight is really to inspire other people to be champions,” she said.

The project began in Trinidad with Patrice working with MadMen Productions, with Swappi not only featured on the track, but assisting Azaryah with the lyrics. It was produced, recorded, mixed and mastered by Johann Seaton. Bahamian Freddie Seymour contributed the Junkanoo percussions.

Once the audio aspect was complete, Patrice brought the project back to The Bahamas for three of the top production houses in the country to work together on the visuals. Gary Wong, a Bahamian producer who made a name for himself in America before returning home to establish his company Helium Creative, worked along with Farreno Ferguson of F Dot Photography. They worked along with IC Marketing with Margaret Glynastis and Dyaria Knowles to complete the project. The video highlights the beauty of The Bahamas with its stunning beaches and crystal blue waters. You see the two stars showing off their country’s flags with pride during the video. The Valley Boys Junkanoo group staged the rush out for the video. As a Bahamas Masqueraders artist, Patrice received significant support from the group, and they consider the video “a walking tourism ad” for the country..

Patrice just signed with Fox Fuse, a digital distribution company, to present the song across all the major digital music platforms including Vevo, Tidal, Apple Music, Amazon, Spotify and much more. But she isn’t limited to Junkanoo and Soca. Expect to see much more from Patrice in the future, as she is talented in singing and performing in a variety of music genres. Last year, she released the reggae single “Rest of My Life”. She also sings contemporary and pop music. In honour of her mother, Patrice contributed her time, money and effort to the Susan G Komen Foundation’s efforts in The Bahamas, and she performs at many of their events. Since her mother has passed, Patrice says her husband Terence Murrell has been her backbone and support since her mother’s death.

“It is a lot of work if you decide to take it on as a profession,” Patrice said, “But with hard work, sacrifice, diligence and focus, you can accomplish anything. I feel like I am reaping some of the rewards today.”