Traumatised By Wigs? Bahamian Men Weigh In On Hairy Controversy 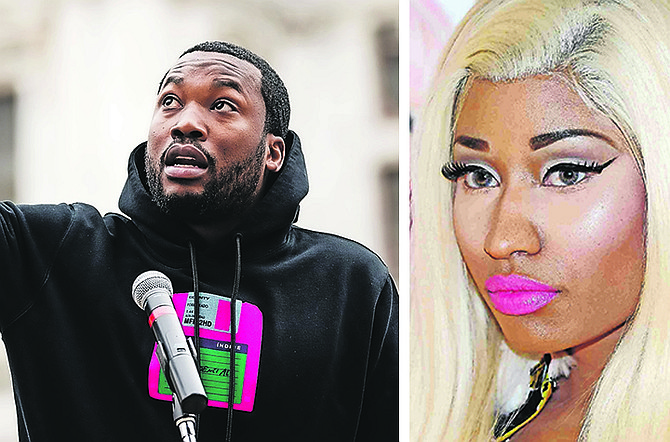 Meek Mill says he's been traumatised by wigs, but his ex, superstar rapper Nicki Minaj, is clearly a fan of the lace front. (AP Photos)

WHEN it comes to beauty accessories, wigs have become a woman’s best friend. They are relatively easy to install, versatile when it comes to styling, and can give you a professional salon look without too much effort and in record-breaking time.

So it came as no surprise that celebrity rapper Meek Mill received a lot of push-back after recently tweeting about his vehement disdain for wigs.

Ranting on Twitter, he said: “Lace front wigs are wackkkk! I’m protesting them. I just hate when you see that lace cap line in front all slicked down and the net in the middle. We letting y’all have everything else…ask y’all man how he feel LOL.”

One Twitter user clapped back at Meek’s, saying: “Wow, imagine being blessed with freedom, wealth and an amazing platform but choosing to be negative and spread hate instead.”

To which he responded: “I’m sorry, LOL I just had a few bad lace experiences that traumatised me...you ever get food poisoning from eating something and never wanna eat it again? It’s the same feeling. I’m off Twitter. I’m still not ready for this app.”

He the further explained that during an intimate encounter he had grabbed a woman’s hair and her wig slipped off. He claims he’s been traumatised ever since.

We know what a woman chooses to do with her hair is her prerogative. But since many women admit that they at least partly decide on whether or not to wear wigs with the view to attracting the opposite sex, we question if Meek Mill’s views represent the feelings of the majority of men, or if he is on his own in his contempt of women wearing wigs?

Tribune Woman quizzed a few Bahamian men on this hot topic. They shared their thoughts on wigs, weaves, and how women wear they hair in general.

Brandon shares a similar view: “If a woman feels comfortable wearing it and it brings out her beauty then I do not see a problem with (a wig) at all. I prefer though that a woman wears her natural hair, but then again, it’s her choice.”

Drew added that women think men pay attention to the details of their appearance, but that isn’t really the case. He said men sometimes cannot even tell the difference between a woman’s real hair and a weave or wig.

“We are not going to say to a woman, ‘Hey, you have on some nice weave. Either your weave look good or it look bad. We ain’t know if its Remy or Stemy’,” he joked.

However, when it comes to wigs that can come off at a moment’s notice, Alvarez had this to say: “I hate them. I really do. It’s almost like you have a woman who is a Transformer. When the wig is on it’s beautiful, but just seeing it come off is always a shocking thing to witness. It’s something I can never get used to.”

And like Meek Mill noted about lace front wigs that come in different parting styles – side part, middle part and u-part – the lace mesh on the wig is unattractive, said Tony.

“It actually looks like the material that screens are made from. I remember seeing a woman with a wig and the parting was so distracting, I couldn’t stop looking at it. It was just so unnatural. You could tell it was not real,” he said.

Meanwhile, Michael says he doesn’t care whether a woman sports a weave, wig or her natural hair, he only asks that it is well kept.

“Whatever it is, just make sure it is fixed. Nothing is a bigger turn-off than seeing a woman without her hair properly groomed. I guarantee, if you want to run (off) a man, don’t groom your hair and see what happens.”