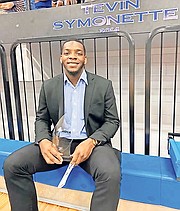 A Bahamian baseball player was recognised by his high school for his historic career and his impact on the central Florida institution.

He was awarded the Rising Star Award as a freshman and co-MVP award as a sophomore and joined the Orlando Baseball Academy in 2011. He was also rated a “Tier A” player at the 2012 Baseball Factory at the Sanford National Tryout, was named to “Perfect Game Florida” Qualifiers All-Tournament Team.

As a freshman Symonette hit .319 while leading the team with four home runs and 25 runs. He finished second on the team with 24 RBIs en route to earning a Rising Star Award.

In the classroom, Symonette earned a 3.7 GPA and was a member of the Honour Roll from 2010-12. He was also named to the principal’s list in 2013. The versatile Symonette was also a two-year letter winner in football and led the team in rushing with 103 carries for 689 yards with six touchdowns while recording 53 tackles during his sophomore season.

Following his tenure at Mount Dora, Symonette joined the Lipscomb University Bison baseball programme where his stellar career concluded last spring with a loss in the ASUN Championship.

He chose Lipscomb over UCF, Florida Tech, USC Upstate, Flagler College among others.

As a junior, Symonette started all 43 of his appearances. He collected 31 hits in 152 at-bats for a .204 batting average. He also recorded four doubles, three home runs, drove in 22 RBI and scored 17 runs. He was a perfect 11-11 in stolen base attempts which was the third most on the team. He also drew 14 walks leading to a .275 OBP.

As a redshirt freshman, Symonette started in 49 of his 50 appearances and hit .304 with 56 hits. He also posted a .500 slugging percentage with eight doubles, two triples, 29 runs and 37 RBI. He also had a .389 on-base percentage, stole four bases in seven attempts.

In his first collegiate season, he led the team with eight home runs, finished second on the team with 17 multiple-hit games and added 10 multiple-RBI games. He tied for the team high with a 10-game hitting streak and had a career high 4-hit game against USC Upstate.

His highlight of the year came in the postseason when his heroics to lead his Bison past the No.3 ranked Jacksonville University Dolphins 10-8 in the opening round of the Atlantic Sun tournament.

Symonette hit two home runs, went 3-5 at the plate and finished with two runs and three RBI on the night.

The son of Tellis and Melinda Symonette, he was also a three-time Bahamian national team member.