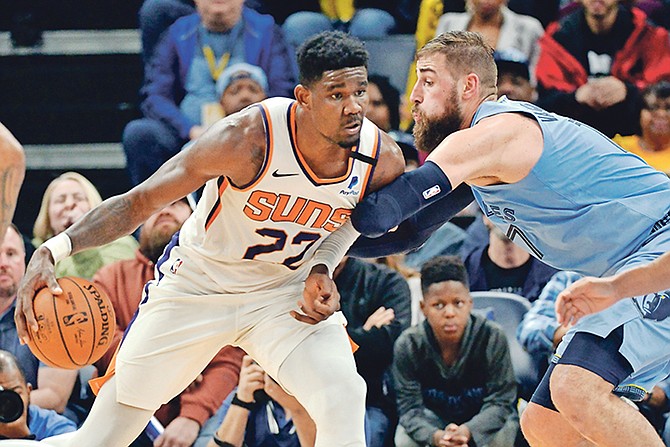 MEMPHIS, Tenn. (AP) — Ja Morant scored 14 of his 23 points in the fourth quarter to help the Memphis Grizzlies hold off the Phoenix Suns 114-109 last night for their second straight victory.

Playing hours after news that former NBA star Kobe Bryant was killed in a helicopter accident, the Grizzlies won the opening tip and immediately took a 24-second clock violation.

When the Suns took possession, they stayed in the backcourt for an 8-second violation — the 24 and 8 representing Bryant’s two numbers during his NBA career.

As the Memphis crowd rose in appreciation of Bryant, they began chanting “Kobe! Kobe!”

Jaren Jackson Jr and Dillon Brooks finished with 20 points each for Memphis.

Kyle Anderson, who had a season-high 12 rebounds, made a two free throws with 11.3 seconds left.

Phoenix lost for the third time in four games.

Memphis was able to build the lead to double digits in the third quarter. The Suns put on a burst at the close of the third, pulling to 79-78 with a 17-4 run as the Grizzlies struggled to hold on to the ball, committing nine turnovers in the quarter.

But Morant took overn the fourth.

In the final 4:06, with the Suns continuing to threaten the Memphis lead, Morant scored eight of 10 Memphis points and the only one where he didn’t, he assisted on an alley-oop to Brandon Clarke. The Suns trailed by a single point once and tied the game twice but could never overtake the Grizzlies.

Suns: Played without C Aron Baynes (left hip soreness), F Cameron Johnson and C/F Frank Kaminsky III (right patella stress fracture). … Played the second of a three-game trip. … Booker missed a free throw in the third quarter, ending a string of 39 straight made. … Rubio was 1 of 10 from the field.

Grizzlies: Starting F Jae Crowder missed the game with right knee soreness. Anderson started in his place. …Morant reached double digits in the fourth quarter for the 13th time this season and fifth in the last eight games.

Suns:. At Dallas on Tuedsay night.