DIANE PHILLIPS: How many could have survived Dorian if they’d known how to swim?

The enormous economic toll of Hurricane Dorian continues to shake The Bahamas with Finance Minister Peter Turnquest this week confirming we were borrowing hundreds of millions more to help rebuild our devastated islands.

Against this number though lies an even heavier burden and that’s the fact we will never know the exact number of people who lost their lives in Dorian, swept away by swift waters and raging floods.

One other thing we do know is that many of those who died might be alive today if they had known how to swim.

Research shows us what environmental science has been telling us all along – the Earth’s waters are getting warmer, seas are rising and ice caps are melting faster than our worst fears, all conditions that make for stronger storms. Another Dorian or even a more powerful hurricane is likely and like it or live in denial, almost no place on this planet is as vulnerable as The Bahamas. With 97 percent of our ‘land’ not land at all, but water, we are in deep trouble. This is not something any political party can fix. Saving ourselves, our children and their children as many of the low-lying islands or portions of islands become submerged, swallowed by those rising seas, is going to take courage.

Our sheer survival may spin not just on where we choose to live and build but our ability to swim and what are we doing about it? Except for proponents of national swim programmes like the anonymous gentleman in Grand Bahama who has funded the YMCA swim lessons for years and coaches Andy and Nancy Knowles who have taken their national programme Let’s Swim Bahamas to more than a dozen schools providing basic skills to nearly 5,000 students, we are doing very little at all.

That is not to discount what the Knowles’ have done – they deserve all the plaudits and praise we can give them and probably ought to be awarded national honours for dedicating their lives to teaching swimming. Every time they start a programme in a new school, it requires six to eight coaches, a bus driver and a site supervisor. While nearly 5,000 sounds like a lot of bodies to have taught how to swim, Andy and Nancy and people like Philice Albury, president of the 16-time national championship Barracuda Swim Club know that number is what they all call “a drop in the bucket.” With a student population of some 66,000 and an overall population of a little under 400,000 and estimates ranging from one to 10 percent of the population knowing how to swim, why is swimming not mandatory in a current curriculum?

That is the question Save The Bays Chairman Joe Darville asked this week. Waterkeepers Bahamas Executive Director Rashema Ingraham questioned it, too. Both read the newly published, highly anticipated curriculum and came away with heavy hearts. No mention of climate change. No classes in environmental science that could touch on rising seas and global warming or impact on The Bahamas, no mandatory learn to swim programmes.

After all, we are required to have a driver’s licence and recent strengthening of the regulations now demands you present that licence and proof of insurance upon request any time you are stopped by an officer whereas in the past you had 24 hours to produce it.

Are we now to believe the law protects other drivers but does little for self-preservation? Forgive us if swimming were once just for fun, for kids splashing in waters near the beach, for Family Island teens who could not wait for the school day to end so they could get back in the water or a boat and go fishing. Forgive us if swimming were once the privilege of the elite in heated pools at private clubs. Forgive us for suggesting swimming is no longer just for fun or for competition or for sport.

Knowing how to swim will fast become a matter of survival and should be included in the national education curriculum. 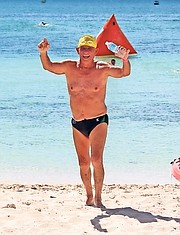 And speaking of swimming . . .

Here’s Percy Knowles, father of Andy mentioned in the article above. He’s 82 in the photo on the left and today, at 89, he continues to swim every day, claiming it keeps him fit and who can argue with that? Son Andy says when they come through the airport and his dad is wearing all the medals he wins in his age category at swimming championships around the world, he sounds like jingle bells. Not bad considering the fact that most people coming through Customs and Immigration at his age would be doing so in a wheelchair.

It really is quite amazing out there

If the words It’s amazing Out There ring a bell, it’s because you’ve heard or seen them on The Weather Channel. All the talk of climate change, powerful storms and the need to swim drove me to refresh my memory on the channel to which we find ourselves increasingly glued especially as weather events like this week’s earthquake occur as we were to CNN during the no-oil-crisis of 1973.

Like others when The Weather Channel first crossed our TV screens in May, 1982, I wondered “What in the world will they cover for 24 hours a day, seven days a week?” Now we take it for granted that we can get up-to-the second weather any time of day by tuning in or going to weather.com or whatever app we choose. And we can’t get enough of it though I could never figure out who cared if it is one degree warmer in Eleuthera than Nassau - no offence Basil Dean.

What still confounds me is the business of weather and why the value of The Weather Channel went from $3.5 billion in 2008 when it was purchased by a consortium of NBC/Bain and worldwide investment mogul group Blackstone, to $300 million 10 years later when it was re-sold, minus certain technology which went to IBM, to a British-based entertainment group.