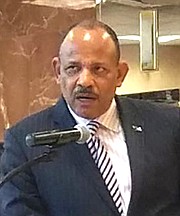 MINISTER of Health Dr Duane Sands is looking into the matter of some nurses not receiving their promised "scarcity allowance" on Wednesday.

It was expected registered nurses and trained clinical nurses in the public health sector would receive $3,000 and $2,000 respectively. Yet, Bahamas Nurses Union President Amancha Williams revealed to The Tribune that "a good number of them" did not receive the allowance.

The scarcity allowance is not mandated in the union's industrial agreement, but is a benefit used by other countries to keep nurses from leaving for other job opportunities.

When contacted yesterday, Dr Sands said he is investigating the complaints. "We've given an undertaking... (to look into) why it is that all of the nurses did not get the initial payment of the scarcity allowance. What we were trying to do is get everybody started in January and then we will back-date accordingly. So, certainly if they haven't gotten it and they're eligible, they will get it."

It was also reported by some nurses that after receiving last month's $1,400 lump sum, that amount was deducted from this month's pay. Ms Williams explained there was confusion surrounding the issue as there was an apparent glitch in the system. Dr Sands could not give an exact explanation for this concern.

"You know we have not changed any position or policy. The nursing union would've been written to by PHA (Public Hospitals Authority), would've gotten assurances by the Ministry of Health. That doesn't change any individual circumstance. So you know there may be individual circumstances, that mistakes may have been made and so on and so forth. I don't have the information in order to speak definitively on it. I will look into it," he explained.