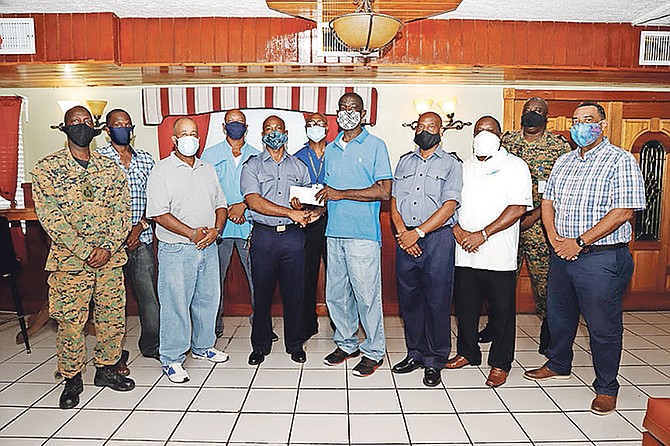 OFFICERS and marines from the Royal Bahamas Defence Force recently came together to financially assist a recently retired comrade with his medical bills. Chief Petty Officer Marvin Newbold was diagnosed in 2014 with a kidney disease known as glomerulonephritis. Over the years, his medical bills have increased and with him retiring from the force in February, his medical insurance was discontinued. As he waits on a kidney donor for transplant, he still requires medical attention. The men of Entry 17 and Entry 20 each celebrated over 30 years of service with the RBDF during the past several weeks. Current and past members of those squads thought to observe their anniversaries by assisting CPO Newbold with his medical bills as they presented him with financial donations to offset his expenses. CPO Newbold was grateful for the gestures, and thanked the men for their contributions. He said whatever amount was donated would go a long way for him, as he is still in debt.

A member of Entry 17, CPO Newbold has spent over 34 years in the organisation, spending the majority of his career in the Military Operations Platoon and the Training Departments. As one of only 10 RBDF personnel to have ever successfully completed the all arms commando course, also known as the Green Beret course, in Lympstone, England in 1987, he remains the only marine seaman to accomplish this feat.

This is good stuff. I wish the CPO all the best.