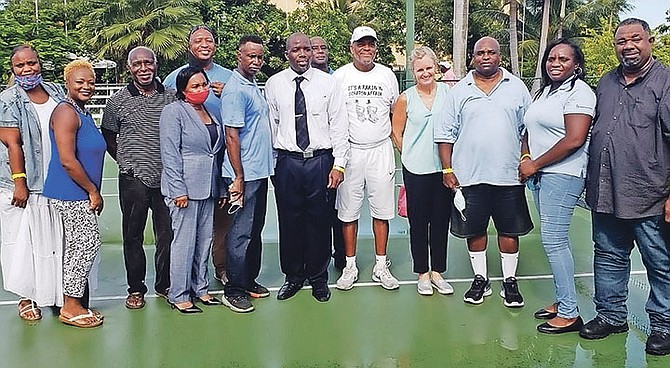 AFTER a landslide victory for the president’s post, Perry Newton’s entire slate of officers went in unopposed during the Bahamas Lawn Tennis Association’s election of officers at the annual general meeting.

Just before the elections took place in front of a huge crowd at the National Tennis Centre, outgoing president Darnett Weir and her executives were summoned to court in a legal battle over the legality of the proceedings.

Immediately after getting the mandate to proceed, Vincent Strachan, president of the Bahamas Boxing Federation, conducted the elections that saw Newton win 117-15 over former female national team player Dyphany Mortier.

“If there’s such a thing as being overconfident, I was confident that I had the support from the tennis community,” Newton said.

“I feel like I’ve touched a lot of lives in a positive way, so it was just humbling that people saw the plans that me and my team had and they wanted to see us go out there and accomplish them.”

Elected as council members were Tara Mactaggart, Everette Munroe, the husband/wife team of Bernard and Shayvon Clarke and Steve Taylor.

Mickey Williams and Corey Francis will serve as NTC directors. “This is such a relief. I am happy and excited. Me and my team have been planning for a while. Now it’s all done. It’s now all about putting our feet to the road and getting the job done,” Newton said.

“It was a really good feeling with the support that I got from the tennis community. It was overwhelming. So it’s humbling for me to be here as the new president.”

He said his executive team made the task so much easier because they all bought into the vision that he presented to them and they brought some positive attitudes to the lead up to the elections.

Through Weir, his sister-in-law, Newton got started in tennis as an appointed public relations officer. He was then elected as the treasurer.

And then in the last administration, he was elected as a council member where he also made an impact as junior development coach.

In his new role up the ladder as the president, Newton said he’s looking forward to getting their junior development programme up and running coming out of the lockdown from the coronavirus.

In 5-6 months, he said they intend to host their first coaching clinics conducted by the International Tennis Federation to get more persons exposed to the development of the game.

As far as the teams selected for the Davis and Fed Cup competitions, which were postponed this year until next year due to the spread of the coronavirus, Newton said more than likely they will keep them intact unless there are some unforeseen circumstances to change any of the players.

Based on the plans presented to him, Butler indicated that he was excited that he gladly accepted the opportunity to work with Newton and his list of candidates. “I’ve always been active in the community, particularly in tennis, more so in the Carmichael community,” said the former baseball/softball player turned tennis coach.

“I think we have started a very good work where there is a lot of interest, particularly among the youths, and we see the interest and we see the spike in the young people wanting to play tennis.”

When he was approached by Newton, Butler said he gladly accepted because when he thought about expanding the programme into the community, he felt it was the right fit to get involved. “This entire team is working. You have people like Cameel McDonald, the president of the Abaco Association, all of these people are already engaged and were actually on the ground working prior to the election,” Butler said.

“So we feel that we can do even more moving forward on behalf of the BLTA.”

Weir, who opted not to seek another term in office, said despite the court hearing and the inclement weather, they got the election done.

“Everybody came out and it turned out to be one of the best elections that we ever had,” she said.

“We couldn’t ask for a better crowd and for their participation in making the event a success. “I think the stakes were high and people wanted the continuity. Perry was on the board before as a treasurer and council member and he’s been in the trenches with the junior development programme.”

Weir said they passed a resolution at an extraordinary meeting to wait until the Bahamas Government relaxed the orders in the country so that they could reconvene the annual general meeting. But once that was done, the opposing side took the BLTA to court to get an injunction to stop the AGM.

However, the BLTA won and the AGM and elections were allowed to proceed.

Mortier claimed that when they arrived, she was told that some of their candidates were not allowed into the NTC.

She said they were disgusted and annoyed in the manner in which the elections were conducted.

“I feel disrespected. There’s just a myriad of emotions because when you come to the National Tennis Centre and someone tells you that you are not a member, it does something to you,” she said.

“The players, whom I had on my slate, were all tennis players who contributed all of our lives to the sport and to hear people turn them away saying they are not members, was disheartening.”

Despite what transpired, Newton said he’s just thankful to God that everything worked out in his favour with his executive team and he’s looking forward to working with his opposition in helping to push the sport further.