Insight: A Radical Voice On Money-Grabbing Pastors, Gays And Women In The Church 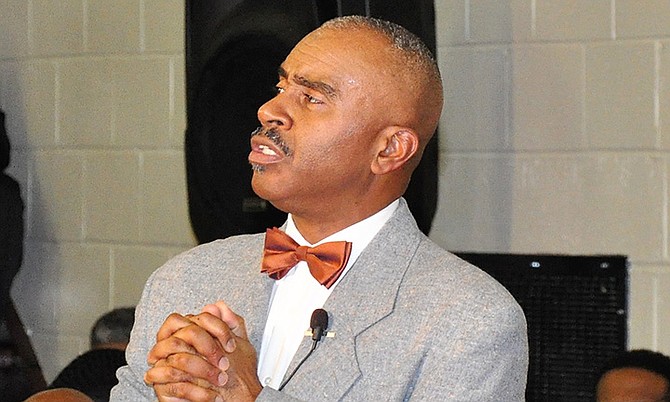 In a world where many religious institutions have evolved into mere money making organisations, where ministers live in million dollar houses, are chauffeur driven and have huge bank accounts, Philadelphia-based pastor, Gino Jennings believes these churches are worse than organised crime - practising deception at its worst and conning their congregations.

Pastor Jennings, a Pentecostal preacher and current general overseer of his city’s First Church of Our Lord Jesus Christ, has travelled to The Bahamas and around the world preaching against the injustices meted out to congregations by “new age pastors” and the ills of society.

Jennings spoke to The Tribune from his headquarters in Philiadelphia. He said instead of making the church take care of them, preachers should work. Pastor Jennings, although pastor to thousands, has a job and does not earn a salary from his church.

“Preachers have successfully manipulated the people into believing that the preacher shouldn’t have to work and that members should be the only ones working and taking care of the preachers and his family,” the pastor said.

“The scriptures teach you that Paul was a tent maker and all of the apostles had jobs. They were fishermen. You do not read in the scriptures where they dropped their occupation.

“My only objective is to educate the people of the true contents of the scriptures so they can stop being deceived and let these men (pastors) get a job and go to work like anyone else. This is deception at its worst. The Bible says if you do not work, you don’t eat. The preachers are only successful with this manipulative preaching because the members of these congregations are ignorant of what is written in the scriptures. The preachers desire for the followers to be ignorant because it empowers them to stay in the position of manipulation, conning and tricking them.”

A female pastor located in south-western New Providence, recently came under heavy fire on social media for having all-night services that saw thousands of dollars given from the congregation for various prayers. Not only were the service-goers allegedly paying for prayers, but they were also introduced to a website where religious items like holy water and “heavenly pillows” were being sold for exorbitant prices.

The African-American Oneness Pentecostal pastor said although he has not had any backlash, “yet” from preachers in The Bahamas for his preaching against the prosperity message, he has met serious backlash from pastors in America and Europe.

“True prosperity is not money, houses or land,” he explained. “True prosperity is the wisdom, knowledge and understanding of who God is. If you learn who God is, then the teachings of God will bring you in to the knowledge of self. Churches have been turned into a business. So when I preach against this, many religious organisations say I am wrong.

Pastor Jennings said he feels that a lot of men just get tired of working and decide to go into preaching based on the results they have seen in mega churches.

“If you evaluate these mega churches here in America, it really is what have these men not wanting to work,” the pastor continued. “They are impressed with these men like T.D. Jakes, Joel Osteen and Fred Pryce, but if you listen to these men, they don’t preach against no sin. They are too timid to hurt anyone’s feelings. They just come up with the topic to make you feel good and you keep living a sinful life and stamp on yourself ‘Christian’ with no change. These preachers justify anything including homosexuality.”

Homosexuality and women’s role in the church has landed Pastor Jennings in hot water before, when homosexuals and pastors in America rose up against him and in some cases his very life was threatened. He holds firm in his beliefs which he quotes scriptures of the Bible to support.

“So the homosexuality has polluted the churches like an overstock of bees coming to one place to collect pollen,” Pastor Jennings said of the subject he feels very strongly about. “It is a very, very unrighteous spirit and preachers are very quiet about it and don’t speak out against it. The Baptists and even the Catholics who used to speak out against homosexuality are quiet on it. The Pope along with many archbishops say now ‘we’re going to revisit the homosexual question’.

“This virus called homosexuality, sent by Satan to handcuff churches who claim to represent God, has become so prevalent, so great, so strong, until most of the so-called religious organisations across the board are holding meetings and conventions to reconsider homosexuality. How can I say I represent God and reconsider what God made plain, that is wrong? God made the woman for the man and for these sick men to be looking at men. How can a man be so moved in the flesh by another man and want to date him? This contamination has gone to the pulpit. There are hundreds of homosexual bishops, overseers, and pastors in America.”

During the interview, Pastor Jennings noted there was a serious draw on homosexuals for positions of choir directors in various churches. He spoke strongly against that lifestyle as it pertains to the church.

“You turn on the television and look at the men leading gospel choirs and they are just as feminine as or more feminine than the women,” he said. “It is very hypocritical that members sit in the churches and see it and say nothing about it. Under no circumstances should that lifestyle be condoned, sanctioned, tolerated in the church in the smallest way because it’s sending a very corrupt message to our children.”

Turning his attention to the role of women in church, he said in the 11th chapter of 1st Corinthians it says: ‘If a woman prays or prophesies while having her head uncovered she dishonours her head.’ He said not only should a woman come to church with her head covered, but she should leave the preaching to the men of the church as it says in the book of Timothy.

“The Bible tells us in the book of Timothy that, ‘Suffer not a woman to teach nor use authority over the man,’” Pastor Jennings continued. “The Bible is specifically against women preaching in the church – no women bishops, no women pastors, no women evangelists and no women apostles in the Bible. Church organisations started that stuff to use women because they are better fundraisers than men. So they let the women hold positions that violate the scriptures.

“I believe that women can be doctors, lawyers, engineers, teachers and all of that but women and men have their perspective places in the scripture. In the second chapter in the book of Titus, it teaches that the aged church women, which are the mothers in the church, are to teach the young women. It also says a woman should be sober, chase, clean, keep a good home and teaches how to love their husbands. The mothers of today seem more interested in wearing the biggest hats, sometime blocking the light in church, than teaching their daughters.”

Pastor Jennings hopes to establish a presence here in The Bahamas, through television, where he can continue to bring his Bible-based messages to every corner of the world.

Thank the Lord Jesus Christ that he has closed the borders to this modern day heretic false Apostle Gino Jennings......a modern day cult. Please meditate on Matthews chapter 25: 1-13 (The parable concerning the 10 virgins)