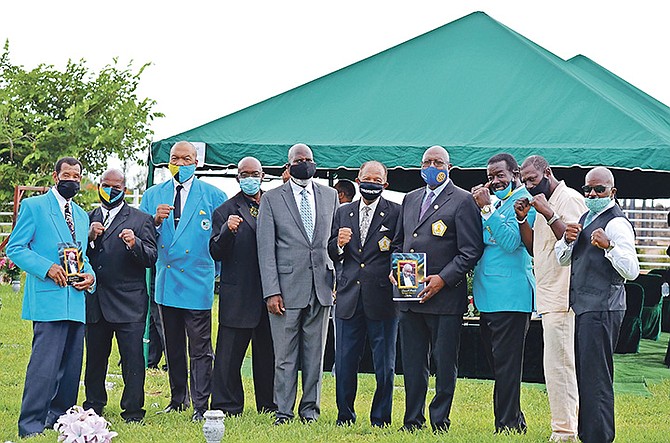 IT’S a pity that after all Leonard ‘Boston Blackie’ Miller did for the Bahamas as a national and international sporting icon in boxing and cycling and as a respected mentor, coach and philanthropist, he didn’t get what he deserved.

Miller, 82, was laid to rest on Saturday in a Bahamian flag coloured casket and draped with a pair of boxing gloves as he was funeralised during a service at New Covenant Baptist Church before his remains were interned in Lakeview Memorial Gardens.

In his eulogy, Pastor Dwight Ferguson of the Church of God of Prophecy, Elizabeth Estates, said he remembered when he attended Government High School, he was in Miller’s physical education class and he had a rather rough introduction.

When he informed Miller of his lineage, Ferguson said he got a different type of treatment. Notwithstanding that, Ferguson said Miller left a legacy behind.

“One thing I can say about Boston Blackie is that he cared,” Ferguson said. “While he was an ordinary man, he did some extraordinary things. It’s a pity that we have to wait until someone dies in order for us to celebrate them.

“It’s shameful that we have to wait until death for us to say that we are going to do something for someone who has made an invaluable contribution to this country.”

After 47 years as an independent nation, Ferguson called on the Bahamas to do better for a man who also displayed his skills as one of the top cyclists in the country, riding a bike with the skinny wheels and the bent handle.

The sentiment was a mutual one as Members of Parliament Glenys Hanna-Martin and Marvin Dames, along with veteran journalist Fred Sturrup, all called for a more fitting tribute to be bestowed upon Miller posthumously.

Sturrup, the president of the Bahamas Boxing Commission, said through his weekly column in the Nassau Guardian earlier this week, he called for an edifice or a street in the capital to be named in honour of Leonard ‘Boston Blackie’ Miller.

As a close friend and confidant of Miller, Sturrup said he will constantly lobby for Miller’s name to be attached to some monument so that it could be viewed by all and sundry going forward.

He said he hopes that the politicians will remember the pledge that they made to ensure that Miller is immortalised the way he should be.

Dames, the MP for Mt Moriah, of which Yellow Elder, where Miller resided, is a part of it, said Miller had such an impact on this nation, but there’s nothing behind his name.

“We in this country look up to politicians and when they move on, we just throw the accolades on them,” said Dames, who was a student of Government High when Miller was a member of the PE Department.

“But you have three politicians in here today who would have been impacted by this man. Yes, we are in COVID period, but as I look through this room, there are men and women who have made significant contributions in this country and we forget them.”

While he said Bahamians should not forget national heroes like Miller, he has some thoughts about how the country can remember him posthumously, but he won’t reveal it just yet.

Hanna-Martin, the MP for Englerston and representative for the opposition Progressive Liberal Party, said she met Miller more than 40 years ago when they were both in the Ministry of Education.

Hanna-Martin said while she knew him as an outstanding individual who was very humourous, charismatic and well respected, she was surprised at the level of contribution that Miller would have made to the country. “He’s been described as the greatest athlete of all time in this country,” she stated. “He grew up in the 1930s and became an iconic figure in this country. He helped to build this country with his own hands. “It’s unfortunate, but it’s not too late for us to raise up the legacy of this incredible Bahamian. To you, his family, he was a good man, but to our country, he was a great man.”

It was an emotional time for Ellsworth Johnson, the MP for Yamacraw and Minister for Financial Services, Trade and Industry and Immigration, as he recalled how Miller took him under his wings and groomed him to become a boxer when he came from Cat Island.

“I was introduced to this man by my father, Oscar Johnson,” he said. “He and my father had a relationship and so he protected me. He sacrificed so much to the detriment of his family.”

Like him, Johnson said Miller impacted so many lives and people trusted him with their children because they didn’t have to worry about him abusing anyone.

When I used to visit him, I used to cry because of what he meant to me as a person,” Johnson stated. “He always checked for children. You knew when someone meant you well. Mr Miller was that type of person.”

Moderator Vincent Strachan, the president of the Bahamas Boxing Federation, throughout the service touched on the contribution that Miller made, not only in his life as a boxer, but others like Quincy ‘Thrill-A-Minute’ Pratt and ‘Marvelous’ Marvin Smith, whom he groomed out of the Boys Industrial School, now known as the Simpson Penn (Centre for Boys), to become some of the top professional boxers of their time.

As a student, who grew up in the ghetto in Bain Town, Floyd Armbrister referred to the time when Miller came to his home and sat on their porch and told his mother that he was going to be great.

Armbrister said while Miller had to go through the process of ensuring that he got all of his papers straight to become a physical education teacher after he was already in the public school system, he encouraged him to ensure that he did it the right way.

Sure enough, after he graduated from CC Sweeting as one of their top distance runners, he got an athletic scholarship in 1986, got his degree and certification and he returned home and became the head coach of one of the most successful sporting programmes at CR Walker where the Knights shone with 22 track and field championships, 21 volleyball championships and 25 cross country championships. And in a video presentation, Bahamas Union of Teachers President Belinda Wilson said Miller was a teacher extraordinaire, coach, athlete, champion, disciplinary and Bahamian legend.

In 1984 when she began her teaching career at CC Sweeting Jr, now TA Thompson, Wilson said she met and worked with Miller in the athletic department where they coached the Cobras together with Jennifer Dotson-Isaacs, Rodney Farquharson, Julie Wilson and Rupert Gardiner to produce a family oriented programme that won numerous titles in so many sports.

She noted that because so many students came out of the ghetto areas of Bain Town and Rockcrusher, Miller used his own personal resources to help many of them to get through school and he didn’t ask for anything in return.

Recalling another humourous side of Miller, one of his sons, Charles, said he would have joked: “All these ugly people here to see me? Man, I must have done something great.”

Insisting that it was a beautiful audience in attendance to pay their last respects to their father, the younger Miller said ‘Boston Blackie’ was well loved and respected by most people that he came in contact with. He said the work ethic that was instilled in him by his parents, Marie Armbrister and Leonard Miller Sr and grandmother will certainly be carried over to the generation of Millers that he left behind to follow in his footsteps. One of those values is the love that was exhibited not only through them, but in the affection that he showed to his wife, Minerva, before she passed away last year. Among those in attendance were Wellington Miller, Quincy Pratt, Marvin Smith, Stevie ‘The Heat’ Larramore, Andre Seymour, Reno and George Johnson, Arthur Buchanan, Nathaniel Knowles, Fernley Palmer, George Turner, Alvin Sargent, Cassius Moss, Peter Gilcud and Martin Lundy.