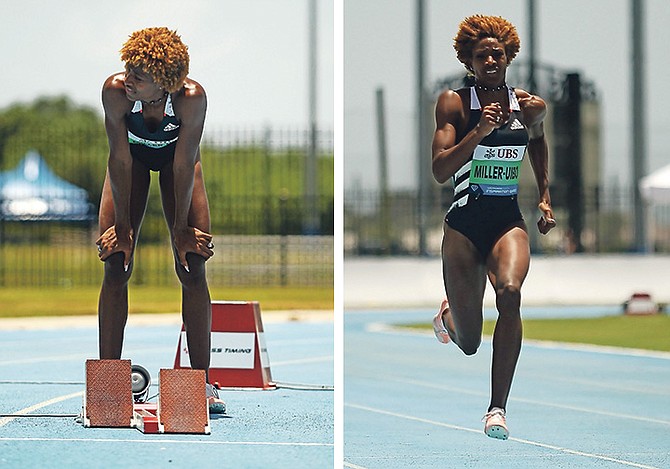 In what could become a norm for some future track and field meets, Shaunae Miller-Uibo lost out to Allyson Felix in their first rematch at the Weltklasse Zurich Virtual Inspirational Games on Thursday.

The duo hooked up in a 150 metre race that was held simultaneously in three different locations with Switzerland’s Mujinga Kambundji as a part of the new format that saw six other events contested.

Felix, the 34-year-old mother, competing against Miller-Uibo, 26, for the first time since they clashed at the 2017 World Championships in London, England, posted the fastest time of the trio in 16.81 seconds in Walnut, California.

Miller-Uibo, competing out of Bradenton, Florida, was second in 17.15 as she contested her second race for the year since her defeat at the 2019 World Championships in Doha, Qatar, while Kambundji, the 28-year-old World Championships’ 200m bronze medallist, was third in 17.38 as she competed in Zurich.

“I’m very happy with it (results),” Miller-Uibo said. “I will give God thanks for me coming here and competing again.

Miller-Uibo and Felix last competed head-to-head at the 2017 World Championships in London, England, where Miller-Uibo faded down the stretch for fourth place as her legs buckled in a bizarre finish.

Felix went on to secure the bronze medal behind American gold medallist Phyllis Francis and Bahrain’s silver medallist Salwa Eid Naser. In the meeting before that, Miller-Uibo won the gold at the 2018 Olympics in Rio de Janeiro, Brazil.

This year, Miller-Uibo and Felix were hoping for another clash at the Olympics in Tokyo, Japan, but the games were postponed until July, 2021 because of the spread of the coronavirus.

Coming off her defeat to Naser at the 2019 World Championships in Doha, Qatar, Miller-Uibo said she just wanted to get a chance to compete before she prepares for next year.

“It’s good just to get some meets and get to compete, but the main focus is going to be next year,” she said. “I’m using (this year) as a building year.”

Felix, the most decorated American female athlete of all time, said the race was a strange one, considering that she didn’t have any teammates as she normally does in practice.

“It’s hard to challenge yourself, so I think the big thing was just running solo,” she said.

“I think we see the hardship everyone is going through and we just wanted to bring a little bit of joy, pause a moment and appreciate the support.”

In competing in her first race of the year, Kambundji said her start was okay, but at the end it got a little harder.

“Maybe later in the season, I could do better,” she stated

With the 2020 Olympic Games postponed until 2021 in Tokyo, Japan due to the rapid spread of the coronavirus, World Athletics used the meet as a way of getting in some competition under the health restrictions imposed for sporting activities that are still trying to find a way to exist under the new measures.

“This is fun. I can’t wait to see when we do it in person,” Felix said.

Miller-Uibo, the reigning 400m champion from the 2016 Olympics in Rio de Janeiro, Brazil. said she was looking forward to competing against her rivals in Japan. But after she found out that no one was going to the Olympics, she was devastated.

“It was something that is a lot bigger than sports and we understand why they had to postpone it,” she stated.

As she prepares for the delayed games, Miller-Uibo said she’s still not certain which event she will compete in, although, according to a report, she is leaning more toward the 200m so that she can add to her Olympic 400m title.

“It’s good to get some meets in and compete,” said Miller-Uibo, who had to settle for the bronze in the 200m in Brazil after her disappointment in the 400m where she led going down the home stretch, only to buckle her legs and slipped all the way to fourth.

“The main focus is going to be next year,” Miller-Uibo said. “I’m using this year as a building year.”

Last year, she requested that World Athletics modify the Olympic track and field schedule to better accommodate a 200m-400m double.

However, a World Athletics spokesperson confirmed Tuesday that it reviewed the request, could not change the schedule and that decision was final.

Olympic schedules have been changed in the past for 200m-400m double attempts, including for Felix and Michael Johnson. But the debut of the mixed-gender 4x400m relay to the Olympic program in Tokyo “added to the complexities of developing the timetable,” World Athletics said in a statement it said it first released last September.

The revised Olympic schedule for 2021 has not been announced, but a change in the lineup of track and field events would be a surprise, especially given World Athletics’ statement on Miller-Uibo’s request.